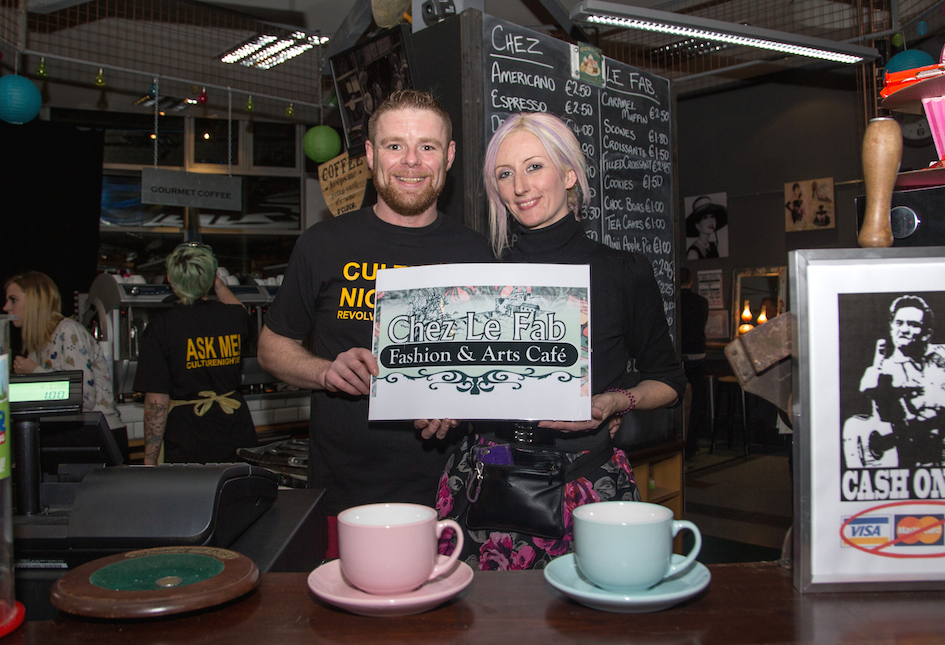 In celebration of Culture Night and the Launch of Chez le Fab Fashion & Arts Café there was a showcase of local talent with a Short Film premiere screening and a Comedy Club from 8pm-11:30pm on September 16.

The first event was the showing of the film Connected2EachOther at 8pm. The film was directed and produced by Limerickman, now living in Clare, Patrick O’Neill originally from Janesboro. All scenes were filmed in Limerick City.

The film explored the theme of connectivity. Eight artists completed a Portrait of Maria Walsh, International Rose of Tralee 2014. One of the artists Charlotte Lee went on to win the Richard Harris International Film Festival Portrait competition in 2015. Another of the artists Mark Heng was a finalist in the Hennessy Portrait Prize.
Aine Helsin, graduate of the World Music of Music and Dance, UL who composed a song “Blathu” which has recently been covered. Sinead Toomey, Singer/Songwriter has performed in Electric Picnic 2016.
The film showed Limerick in a very positive light, with the opening sequence on the Shannon being spectacular. The schoolchildren from Our Lady Queen of Peace, Janesboro sang the opening song, provided a surprise for Maria and closed the film in a dance sequence. A lovely, original song “Limerick” by songwriter/singer Yvonne McCarthy was featured also.

The second event was the showing of a film titled First Portrait, a short film, and the Premiere starts at 8:30pm.

This was the first Screening of this unique style of emotional portraiture combining the person’s favourite piece of music and portraiture, a collaboration between two artists, featuring “Streets of London” performed by Sinéad Toomey.

The third event was stand up comedy by the Treaty Comedy Club which commenced at 9:30pm.

Treaty Comedy Club is dedicated to bringing stand-up comedy to Limerick City. Established in 2012, Treaty Comedy Club has brought some of the best up and coming acts to the South-West to perform for Limerick audiences. The Club recently underwent a 12 month hiatus as they struggled to find a new venue but they found their new home in Chez Le Fab; a venue just as passionate about bringing comedy to limerick as they are. With the aim of stimulating a growth of interest in Limerick City Comedy, together with our new hosts, Chez le Fab, Treaty Comedy is looking to make Limerick City an attractive destination for comedians across the country!

Treaty Comedy Club will host regular gigs every 2 weeks on Friday Nights at their resident venue Chez le Fab with lineups announced in advance, and will play host to some Open Mic Comedy Nights.

For more news on Culture Night from I Love Limerick click here.

ISAX seeks over 50s for pioneering Start Your Own Business programme