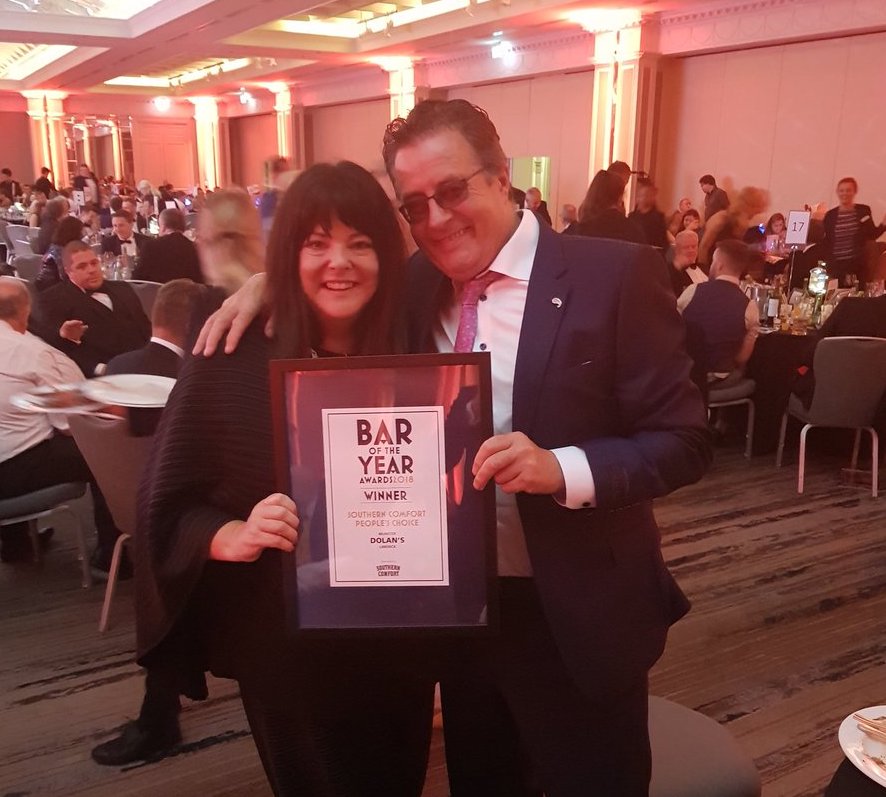 Dolans Pub and Restaurant have won the Southern Comfort People’s Choice award for the Munster region at the Irish Bar of the Year Awards 2018.

The Bar of the Year Awards, which recognise excellence in the Irish bar trade, were announced this evening at a Gala ceremony in Dublin’s Burlington Hotel.

Dolans were also shortlisted in the Best Live Entertainment category at this year’s awards.

The People’s Choice award is the only category which allows members of the public to have their say.

Speaking at the ceremony on Monday 20 August at the Burlington Hotel in Dublin, Mick Dolan said: “We are absolutely thrilled to be taking this award home this evening. To win is always special but to be taking home the award that is voted by the people makes it that extra bit special.

“We know there are celebrations across Limerick city and county this evening. Tonight’s news puts the icing on the cake for all of us in Dolans on what has been the most wonderful and historic weekend for the people of Limerick”.

They won the Pure Magazine Best Venue award in 2017 and were also the recipients of the Irish Pub Awards Best Music Pub for the South West region. In 2015 Dolan’s were also the overall winners of the IMRO Live Music Venue of the Year awards.

Established in December 1994 by Mick and Valerie Dolan, Dolan’s Pub on the Dock Road in Limerick was created with the mission of promoting local and national traditional music acts.

Dolan’s Warehouse was opened in 1998 seeing the creation of a venue with a capacity of 380 people and one that has become recognised as a key destination on the Irish music touring scene and has hosted many Irish and international acts over the past 20 years.