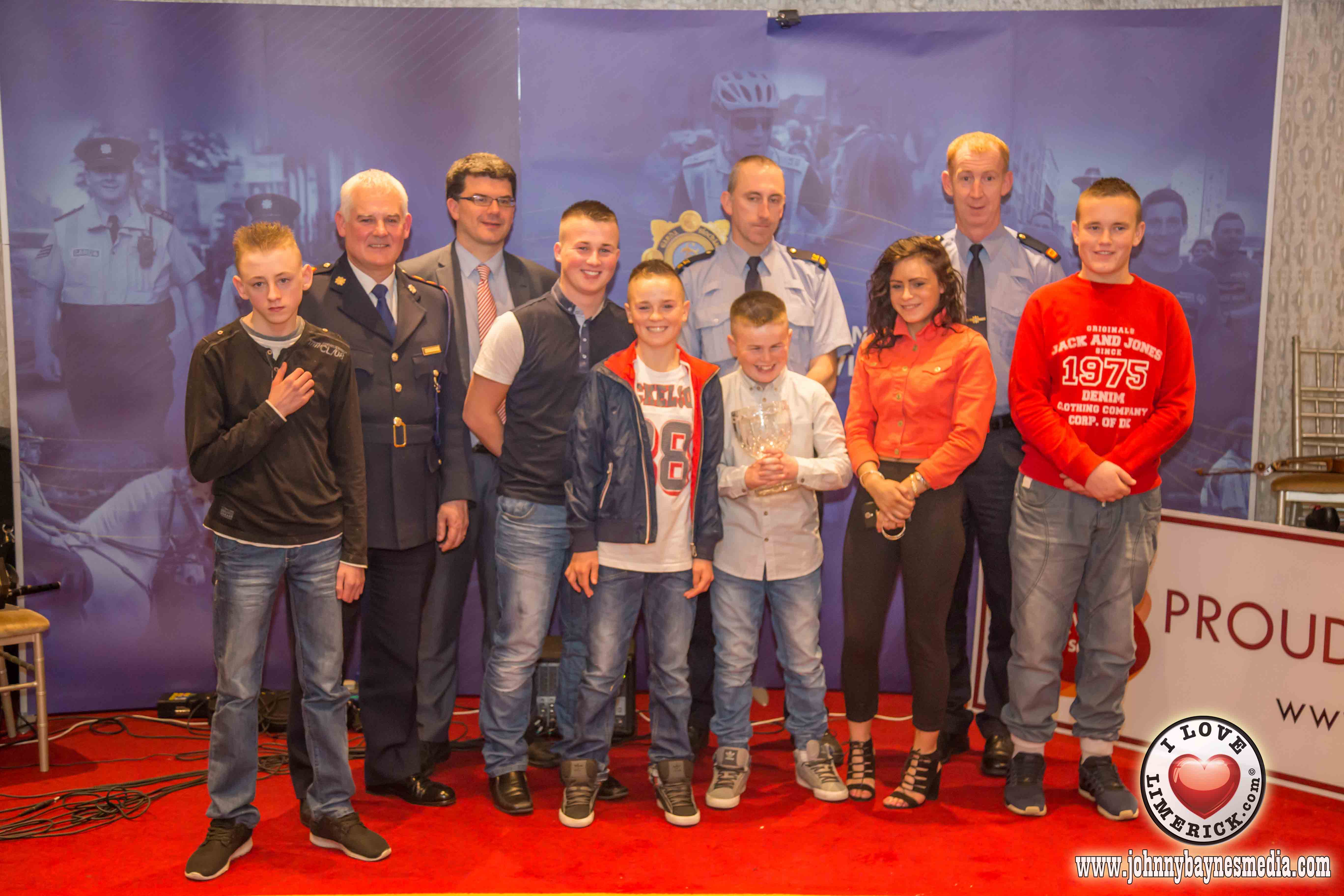 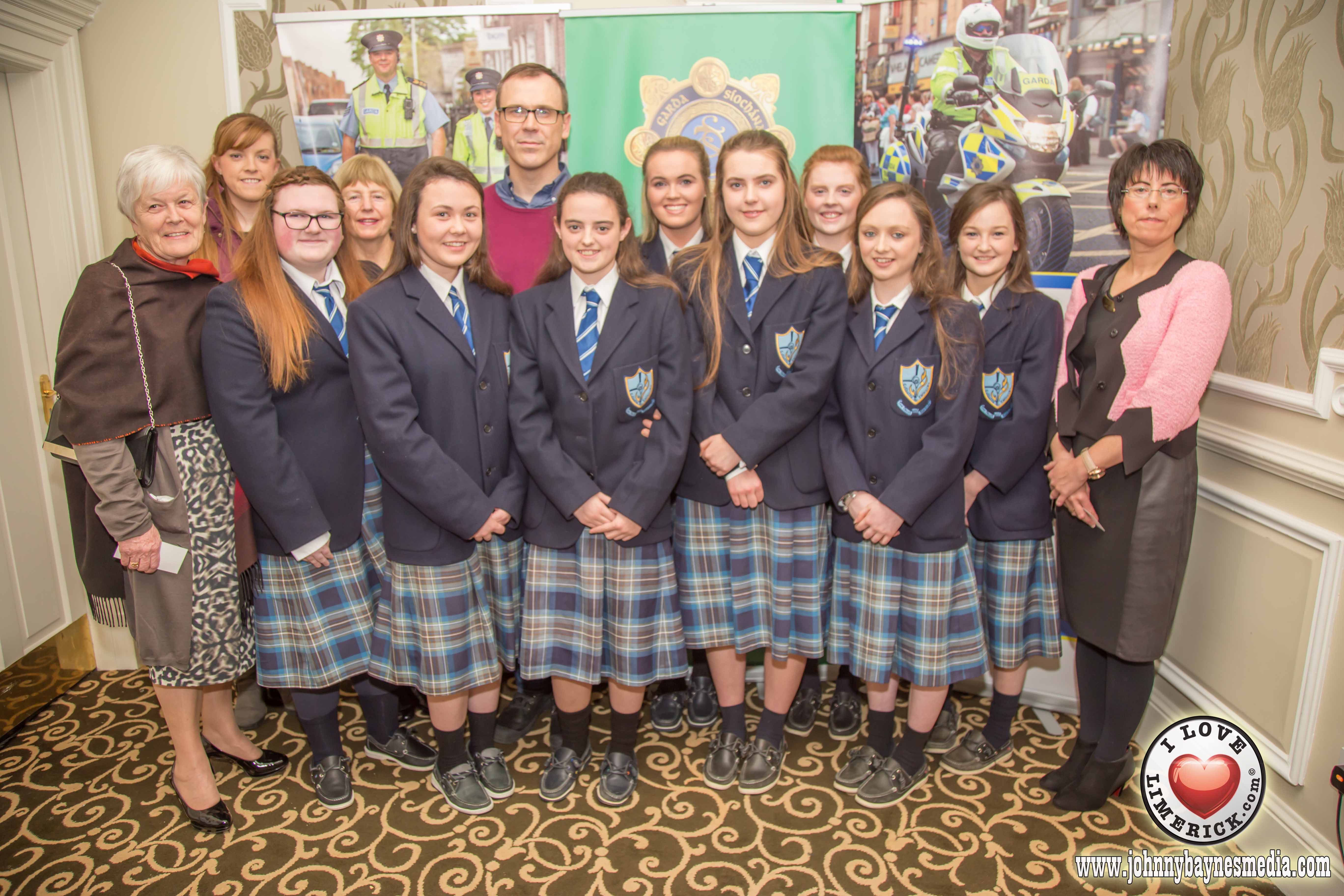 Youths throughout a number of Limerick communities were praised this week at the second annual Garda Divisional Youth Awards 2015.

Limerick Gardaí, in association with Garvey’s Supervalu and Centra, presented the awards in the Woodlands Hotel in Adare, celebrating young people for the positive contributions they have made to their families, schools and communities.

Chief Supt David Sheahan commended award winners, praised the work and effort made by the families of winners and called on recipients to “continue to innovate and make a difference” in their communities.

Limerick City and County Mayor Cllr Liam Galvin attended the awards in a show of support, praising the “example of young men and women, giving their time and putting themselves out there.”

Among the winners were the Butterfly Club, of Colaiste Trocaire, Rathkeale, recognised for their work with children with special needs in the West Limerick area.

Every month, they volunteer to provide respite to parents of children with special needs. Laura Mulqueen, a member of the club, spoke about the benefits of the initiative, both for parents and for students.

“I think it’s been a great help to parents, so they get a break for the day and we all get enjoyment from doing it, too. They’re amazing children. 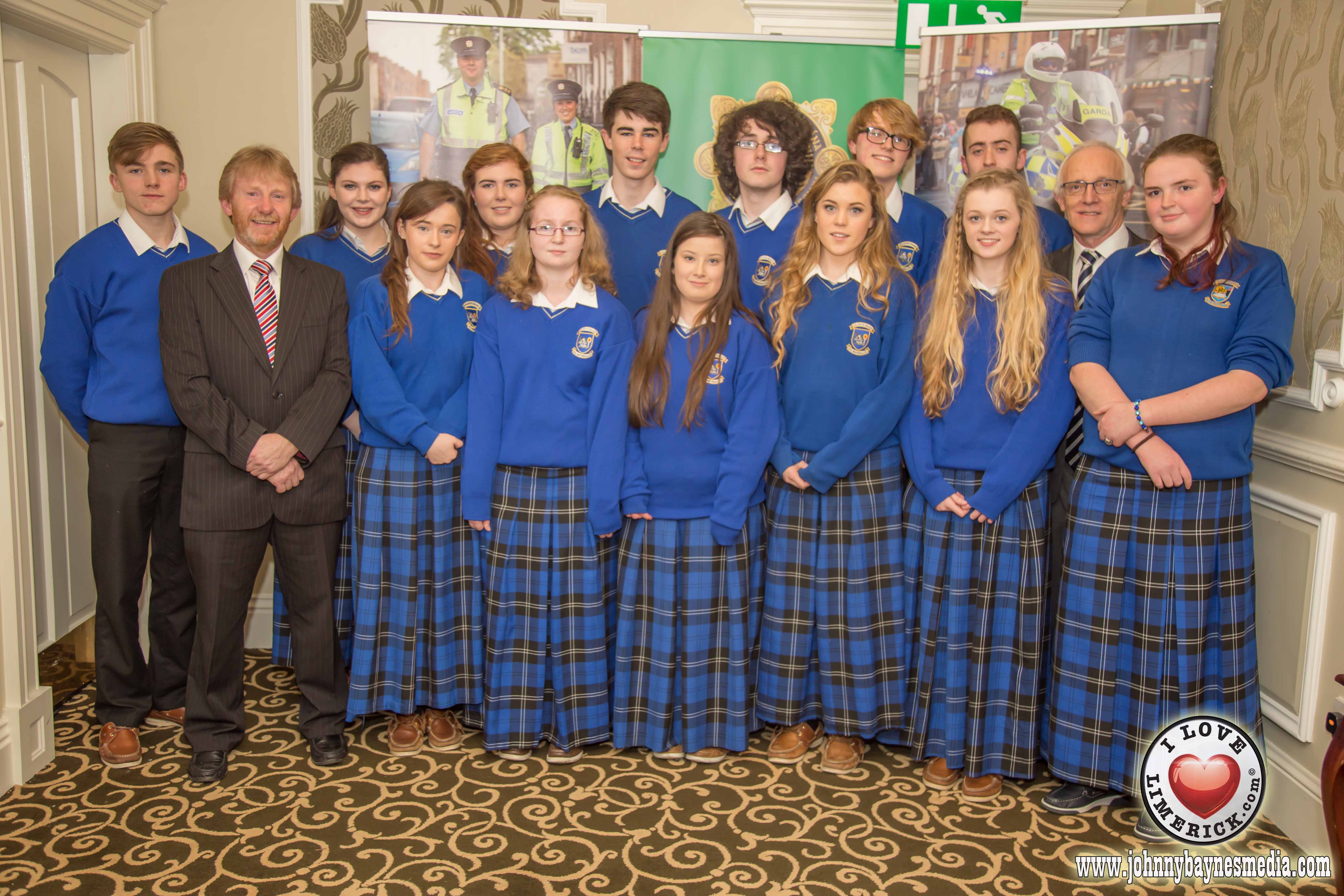 The YSI Class, of Colaiste Iosaf, Kilmallock, consists of classmates who, following the death of their friend, decided to highlight asthma awareness.

After contacting the Asthma Society and taking part in an e-learning course, the group have been promoting their ‘Not Every Breath-taking Moment is a Good One’ campaign. Their efforts have worked to make their school a more asthma-friendly environment.

Speaking about their project, Patrick Joy, a student of the YSI Class, said that they wanted to promote Asthma awareness, because of its prevalence in Ireland.

“I think it’s so important to inform people about the dangers of Asthma, considering that one person a week in Ireland dies because of Asthma,” he said. 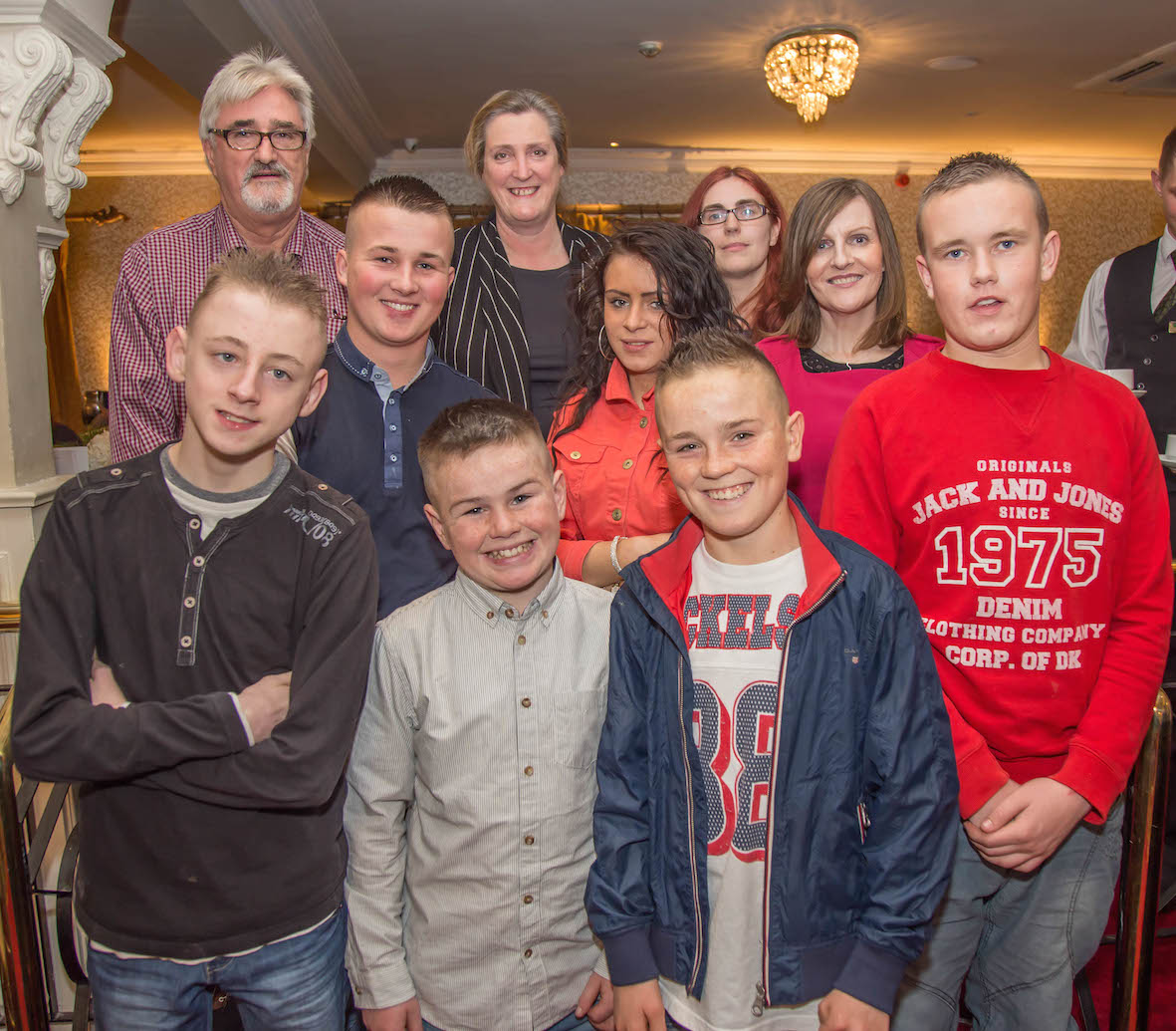 St. Augustians School Limerick City Tidy Towns group consists of Dillon Collins, Chloe Collins, Raymond Collins, Luke Foran, Stephanie Waters and Jayden Collins. As part of the Limerick City tidy towns campaign volunteers were sought to help improve the environs of the city. This group of young people from Augustians answered that call and together with other volunteers have played a major part in helping to improve Limerick City. They also take part in visits to the elderly. This involvement has been of benefit to their school, Limerick city tidy towns and to the community in general and is an example of what can be achieved by positive engagement from all sides of the community.

Katie from the Dublin Road in Limerick city is a former student of Ardscoil Mhuire, Corbally and is now studying at UL. She is the founder of Lisa’s Light and earlier this year successfully lit up the bridges of Limerick with bright, positive and life affirming messages to help prevent suicide and promote positive mental health in Limerick. She was successful on Dragons Den with her idea ‘4Freddy’ to help children with serious illness. She takes an active part in all activities within her school and the wider community and leads by example. She has spoken to young people on mental health issues and is a role model for all among her school and community.

The members of the Limerick Special Olympic group are Ben Christianson, jack Dowling, Sarah Doyle, Ian Gilvarry, Evan Keays and David Willis. Ben joined Special Olympics in 2013 and since then has taken part in national competitions in athletics winning a number of medals. Jack, Sarah, Ian, Evan and David earlier this year took part in the Swim Ireland event in UL. They all swam one mile which is a total of 32 laps of the UL pool. All members of the group trained very hard for their events and showed great enthusiasm dedication and commitment during the months of preparation. Following the advice of their dedicated mentors they persevered when training was difficult, supported each other all the way and receive their award for all their great efforts during the year.

St. Augustians School Limerick City Tidy Towns group consists of Dillon Collins, Chloe Collins, Raymond Collins, Luke Foran, Stephanie Waters and Jayden Collins. As part of the Limerick City tidy towns campaign volunteers were sought to help improve the environs of the city. This group of young people from Augustans answered that call and together with other volunteers have played a major part in helping to improve Limerick City. They also take part in visits to the elderly. This involvement has been of benefit to their school, Limerick city tidy towns and to the community in general and is an example of what can be achieved by positive engagement from all sides of the community.

Aimee from Ballyneety Co Limerick is a fifth year student in Colaiste Chiarain in Croom. Throughout her life she has faced many serious health challenges which resulted in her missing a large amount of time in school. Despite this she has obtained excellent results in her junior certificate. She continues to be highly motivated and positive. A great conversationalist she is a major influence on those around her and always has a kind word for everyone. She visited Belgium last year and again had to overcome some obstacles but with the help of others had a great time. Her ability to deal with life’s issues with a smile on her face has endeared her to all who make her acquaintance. She continues to look ahead to the future in a bright and ever positive manner and is now planning for her leaving certificate.

Paul is from Prospect in Limerick City and is currently a student in St Clements College, Limerick. He is a champion freestyle dancer since primary school and has won numerous national titles in the community games. He now competes on the international stage and recently won a competition in Wales becoming the under 16 elite champion from among nearly 1500 competitors. He uses his talents to great effect among the community and is a member of the local choir. He is a member of the West End Youth Centre in Ballinacurra Weston where he teaches dance to young people from the area. He is a young person willing to share his talents and his hard work and dedication has been an inspiration to all among his school and community.

Caoimhe is from Kilteely, Co Limerick and is a sixth year student in John the Baptist Community School in Hospital. She has been an invaluable youth officer in the Kilteely, Dromkeen, Garrydoolis community games for a number of years. She has been instrumental in organising local talent shows, sports days and, training sessions. She encourages other teenagers to become involved in community activities and has worked on the annual summer camps for four to seven year olds. She got involved in Kilteely Dromkeen’s pride of place bid and was highly commended for her presentation about her local parish. Whenever Caoimhe is involved in a task she will always be enthusiastic, energetic and committed.

Jamie from Kennedy Park, Limerick City is a member of the Southill Club2gether Youth Project since 2012. He joined the leadership programme in 2014 and was actively involved in planning and facilitating the summer camp program for 2014 and 2015. He was presented with a special award by Limerick Sports Partnership for his outstanding contribution to their VIP program and was a member of a group that made a short film highlighting the dangers of driving while under the influence of alcohol or drugs. He is a young man that is clear about his values and has grown into a role model for young people in the community. He is currently studying advanced sports, recreation and exercise in the Limerick College for Further Education.

YSI Class. Colaiste Iosaf Kilmallock group consists of Rian Brady, Gemma Sheedy, Maria Cronin, Eabha Barry, Aisling O Donnell, Eilis Daly Shinny, Jean Cleary, Katie Meade, Moira O Dea, Triona Reidy, Michael Sheedy, Michael Donegan, Jason Enright, Josh O Brien, Ben Upton, Jack Barry, Patrick Joy and Gillian Coleman and are led by their teacher, Eddie O Carroll. Following the death of one of their classmates, James Long, the class decided to highlight asthma awareness. Having contacted the asthma society, they took part in an e learning course and were on stage in the University of Limerick promoting their asthma aware theme, ‘not every breath taking moment is a good one’. The group feature on the Asthma awareness website and they have been instrumental in helping to make their school asthma friendly. Ireland has one of the highest occurrences of asthma in Western Europe and groups such as the YSI class highlighting awareness of it and educating people on how to deal with it can have life changing benefits.

Ben is from Newcastle West, Co Limerick. He is a student in Desmond College, Newcastle West and is this year studying for his junior certificate. For the last number of years Ben has been challenged with serious medical issues but this has not impeded him in living life to the full. In the past year he was in charge of the organisation of a non uniform day in the school and in the process raised nearly €1000 for Temple Street hospital in Dublin. He is great role model to all who meet him and is an inspiration to others with his caring and generous nature and his willingness to get on with a normal life despite the many challenges that are put before him.

Megan Lenihan, Laura Mulqueen, Aoife O Riordan, Emma Shorten, Eilise Woulfe, Chloe Tagney, Shauna Lynch, Clodagh Madigan and Mary Hennessy are all students in Colaiste Trocaire,Rathkeale and are members of the Butterfly Club. Together with their teacher, Lorna Bunyon, every month they volunteer to provide respite to parents of children with special needs in the west Limerick area. They also help out with organising Christmas parties and summer camps for the children. Everyone of the group is very committed to the club and enjoy working with the children. They also assist in helping at other events, such as swimming and bowling. These young volunteers provide a very important service, which shows their commitment to their community and their willingness to help others.

Photos by Johnathan Baynes for I Love Limerick. All Rights Reserved.