By Richard Lynch on March 6, 2019@richanthon 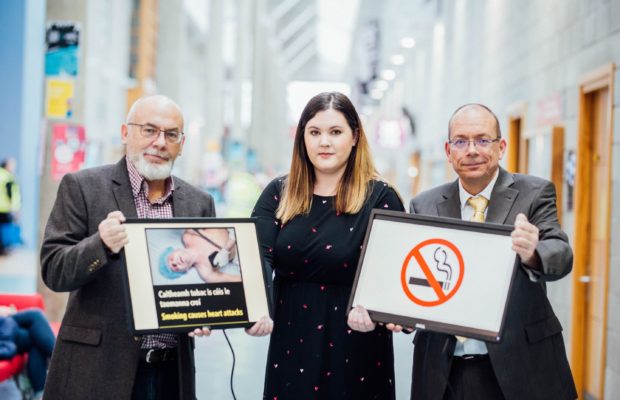 HEALR Research Group from LIT (Limerick Institute of Technology) have found that the European Union Anti-Smoking Campaign is “structurally racist”.

Neither the original set of 42 anti-smoking images produced by the European Union and used on cigarette packages and anti-smoking campaigns or the revised 42 combined warnings, distinctly include members of racial or ethnic minorities. All visible models, or body parts of models, used in the campaigns are Caucasian.

HEALR Research Group researcher Diane O’Doherty explained, “Given the importance of the necessary self-referential element in effective tobacco control warnings, the introduction of anti-smoking graphic images in recent years necessitates the inclusion of racial diversity in the depictions used. This, however, has not been reflected in the anti-smoking warning images used throughout the EU, where diversity is not only lacking but is non-existent.”

“Historically, the issue of racial invisibility or under-representation in anti-smoking tobacco packaging warnings was less of an issue, as warnings were purely text-based and essentially ‘colour-blind’,” she said.

“The absence of racial diversity in current EU anti-smoking graphical warnings is particularly notable given the specific targeting of racial and ethnic minority groups globally by big tobacco companies. These companies have a long history of differentiated marketing designed to entice distinct market segments into smoking, therefore anti-smoking campaigns should also consider such strategies in their response.

“The absence of diversity in official EU anti-smoking imagery is surprising given the numbers of ethnic and racial minority members in the European Union. This complete absence of any racial or ethnic diversity effectively discounts the negative impacts of smoking in non-white groups. This effectively normalises smoking in such groups, supporting the differential marketing of tobacco companies. It is therefore important that in reviewing the use of images for tobacco packaging, all ethnicities of a country are represented, not just the dominant white culture,” added Ms O’Doherty.

Dr Frank Houghton said, “Smoking remains a significant issue in Ireland, with The Tobacco Atlas estimating 5,600 deaths per year from tobacco-induced diseases in Ireland and an economic cost of €2.826 billion.

“Smoking remains the leading cause of preventable mortality globally. The mandatory introduction of combined anti-smoking graphic and text warnings on tobacco products within the European Union (EU) has been welcomed as an important element of the necessary war on tobacco.

“However for the warnings to penetrate all members of our society, the images and warnings must reflect all racial and ethnic minorities. This is an important issue given higher smoking rates among members of some ethnic groups.”

Dr Derek McInerney added, “While it should be acknowledged that overall smoking rates among ethnic group members in countries such as the UK may be lower than those of the majority population, this figure hides important differences in gender-specific smoking rates which can be attributed to cultural and societal norms held within these ethnic groups. For example, although the prevalence of smokers in the white male population in the UK was 20.8% in 2014, the comparable figure for Bangladeshi males was 28.1%.”

“Complacency or simply maintaining the status quo on the issue of tobacco control is not acceptable. The damage wrought by tobacco-related mortality and morbidity is significant and costly. It should be acknowledged that the decline in smoking rates appears to have stalled in countries such as Ireland. Therefore, a new approach which speaks to people of all race, colour and ethnicity is required,” he concluded.