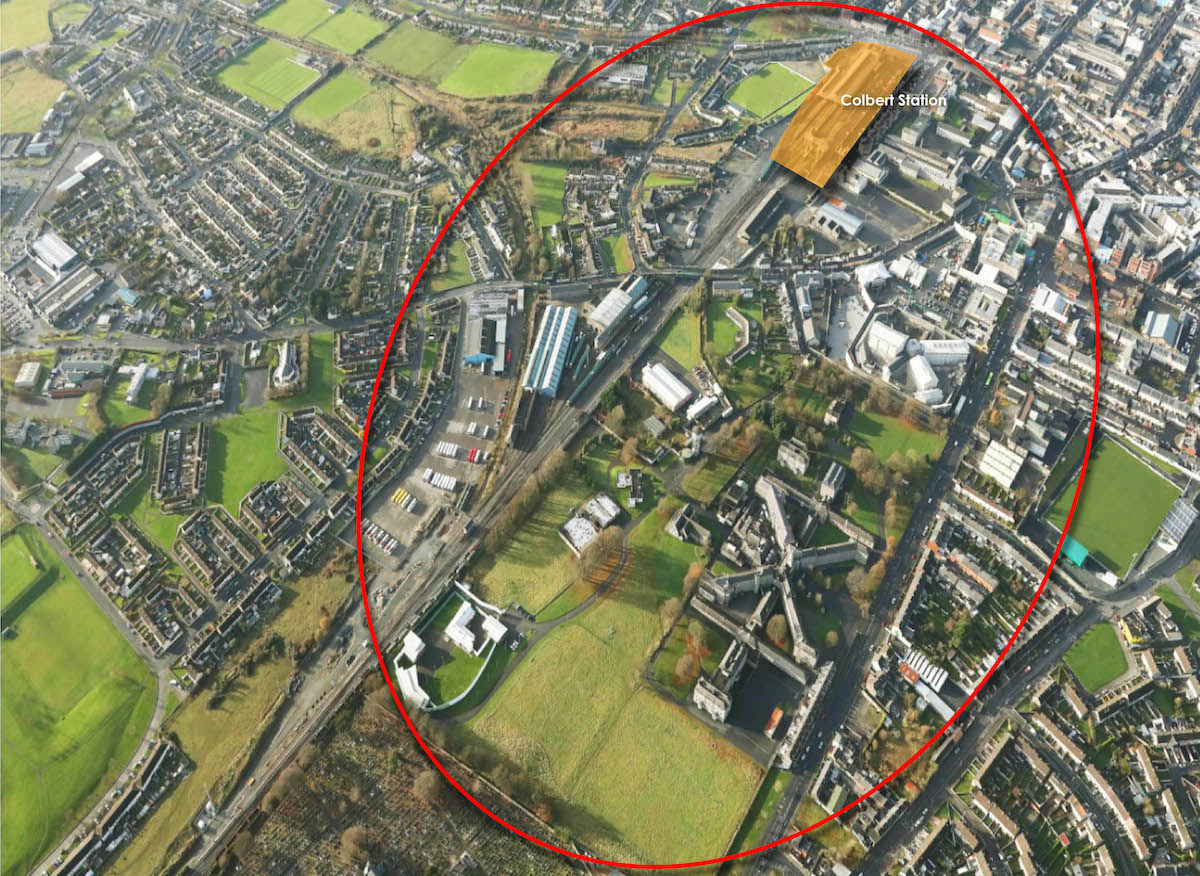 The Land Development Agency, Limerick City and County Council and CIÉ to work together on a proposed urban living district

Please note: The red circle on the image is only indicative of the area under consideration. No decisions/ plans have yet been taken/ finalised. Land Development Agency

The Land Development Agency, Limerick City and County Council and CIÉ to work together on a proposed urban living district

Limerick City and County Council, the Land Development Agency (LDA), Córas Iompair Éireann (CIÉ) and other stakeholders have today announced plans to explore how a strategic land bank in excess of 50 hectares under state ownership can be re-imagined and re-developed to create a new 21st Century urban neighbourhood at Limerick’s city centre train and bus station, Colbert Station.

The redevelopment project will be master-planned in line with best international principles of sustainable transport-oriented development to provide for a new urban living district including housing, work, cultural and play areas, along with public services such as health and educational facilities.

The Board of the LDA has agreed today to provide initial funding to commence the master-planning process for the lands, of which the CIE lands make up the majority.

The beginning of the master-planning exercise marks the first LDA commitment to housing development in Limerick. In conjunction with Limerick City and County Council, the Department of Education, the HSE and CIÉ, the initiative marks a major step towards the re-development of Limerick city centre in line with the objectives set out in Project Ireland 2040.

The master-planning exercise will evolve high-level framework proposals for the development of the area. These proposals will be tested and informed by wide-ranging consultation with the elected members of Limerick City and County Council, the people of Limerick, community representatives and stakeholder groups. The RIAI has agreed to support the master-planning exercise through their design review process.

The process will also incorporate analysis of infrastructure, funding and other implementation requirements and help inform the on-going process being conducted by Limerick City and County Council for the statutory development plan for Limerick. The process is expected to begin as soon as possible, commencing with an initial scoping exercise.

The Land Development Agency have announced a new master-planning initiative for the Colbert Station area of Limerick Cityhttps://t.co/5qzJ6cW0jq

Eoghan Murphy TD said, “Not only will the master-planning process outline a roadmap for future development at Limerick’s Colbert Station, but it will also help provide a framework for development in other key urban areas by adopting international best practice in the delivery of social and affordable housing, as well as work and community spaces. This is a hugely important part of the work of the Land Development Agency.”

Cllr Michael Sheahan, Mayor of the City and County of Limerick, said,  “We all know the need to create new alternative housing and work opportunities in Limerick, to facilitate growth in our region while remaining one of the most affordable places to live in Ireland.

“These lands, which are so centrally located, present a perfect opportunity for the re-development of and investment into underutilised parts of our city. I welcome this initiative and I look forward to the consultation phase where elected members and the people of Limerick will be involved in inputting to the masterplan,” he added.

John Moran, Chairman of the LDA, said, “It is important to build for the future before it is upon us. For the LDA, which is itself an agency with a national focus, we welcome the opportunity to complement our existing sites in Dublin, Cork and Galway by working in other areas where upward demographic pressure is expected. I am particularly pleased to see officials at Limerick City and County Council and the other stakeholders willing to do that with ambition and for scale.”

John Coleman, CEO of the LDA, said, “Like our other regional cities, Limerick has huge potential for increasing its scale by providing attractive living and working spaces in core city centre locations such as the area around Colbert Station. I am delighted that we can work with Limerick City and County Council and the landowners to take the first step towards realising Limerick’s special opportunity for a major transit-oriented mixed purpose development.”

Lorcan O’Connor, CEO of the CIE Group, welcomed news of the Master Plan and said, “by working together with other landowners and stakeholders, we can ensure the best sustainable development for Limerick City centred around the existing rail and bus services in the area. CIE believes it is critical that all future large scale developments across Ireland are based upon the principles behind Transport Orientated Development.

Dr Pat Daly, Chief Executive of Limerick City and County Council, outlined the potential scope for collaboration between all the parties, he said,  “We are delighted to work with the LDA on the further development of sites in the city centre.

This will be complementary to the work that Limerick Twenty Thirty has done in terms of making sure we have a high-grade commercial property in the city through the Gardens International project and the ongoing work in the redevelopment,” he added.

Limerick Twenty Thirty CEO David Conway has welcomed the commitment by Limerick City and County Council, the Land Development Agency and CIE on a masterplan for the development of a 21st Century urban neighbourhood at Limerick’s city centre train and bus station, Colbert Station.

Said Mr Conway:  “This is again a very positive move for Limerick.  The transformation of the area around Colbert Station will be another major catalyst of growth for the city and region providing excellent development opportunities. This masterplan exercise complements the work Limerick Twenty Thirty is doing at the Opera and Cleeves sites and what we have already done with Gardens International. It again shows that the city’s ambition which is illustrated through these and other development projects like the new UL city campus and International Rugby Experience.

“It’s a transformation that is happening now at pace and is going to change the physical and social landscape of Limerick for generations to come as well as have a huge and positive ripple effect out into the mid-west region.”

He continued: “Another very positive element of the Colbert Station area project is that it brings together key national and local stakeholders to a project that is in keeping with the wider vision for Limerick. We wish all involved every success and look forward to working closely with them.”