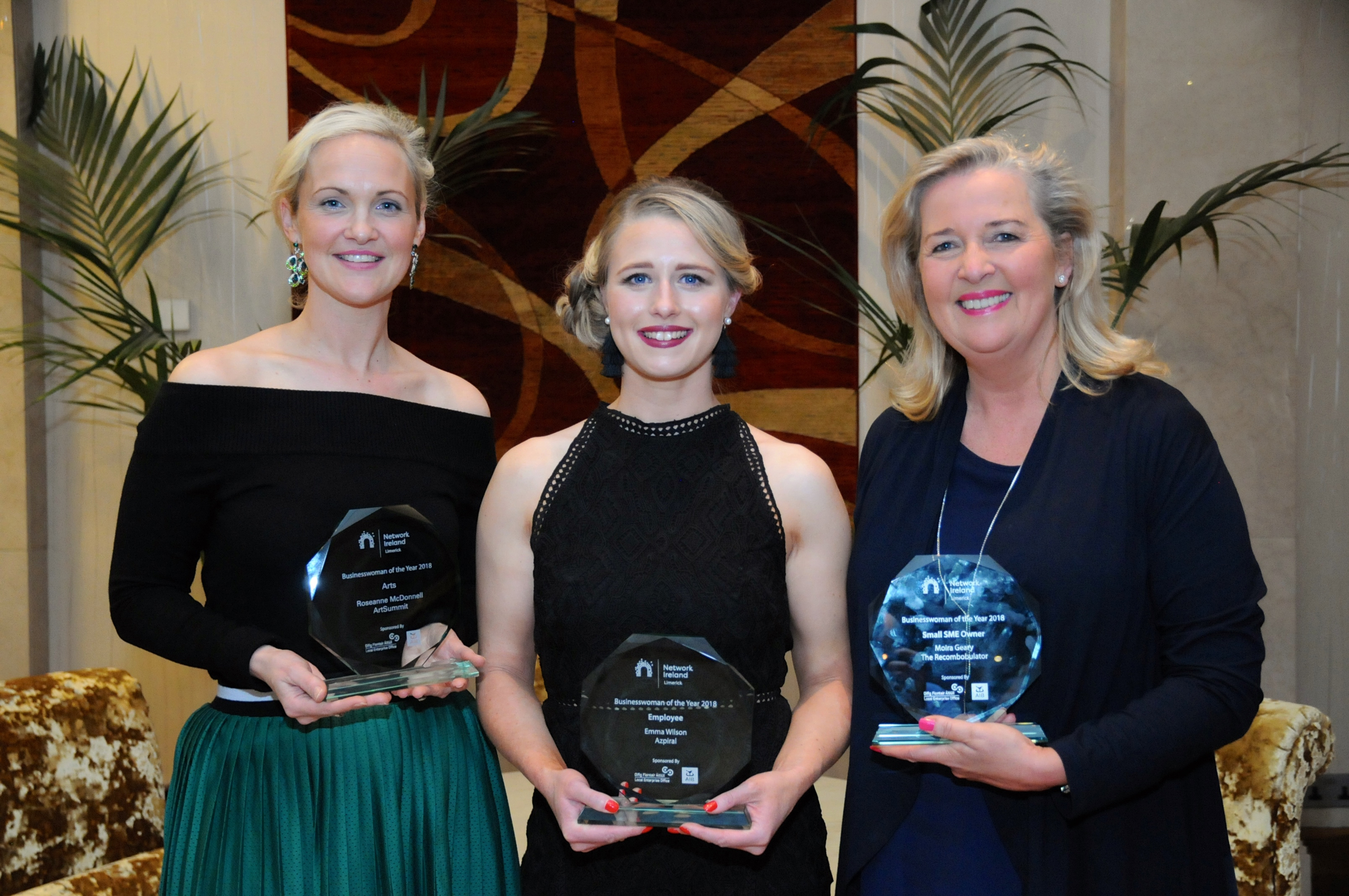 At the Limerick Businesswoman of the Year Awards 2018 in the Savoy Hotel was the winner of the Arts category, Roseanne McDonnell, Art Summit, Winner of the Employee category, Emma Wilson, Azpiral and Winner of the SME category, Moira Geary, Recombobulator.

The winners of the Network Ireland Limerick Businesswoman of the Year Awards, sponsored by LEO Limerick and AIB, were announced at a special awards evening last Thursday, May 17, at Savoy Hotel, Limerick.  18 finalists were competing across five categories.

The winners of each award category will now go on to the national finals for Network Ireland which will be announced at a Gala Ceremony in September in the Galmont Hotel, Galway.

The Awards night was opened by special guest speaker Evelyn O’Toole, CEO of Complete Laboratory Solutions and winner of EY Industry Entrepreneur of the Year 2017.  During her talk, Evelyn encouraged women in business to ‘step out’ more saying “Don’t hold yourself back, take little steps, it will never feel normal but it will give you more confidence and help you find your voice.”

Speaking at the Awards ceremony, Valerie Murphy, President of Network Ireland Limerick said, “Network Ireland is all about encouraging each other to be the best we can be. Our awards are a way to highlight everyone’s potential and provide a great opportunity to recognise our member’s achievements, ambition and professionalism. We had 18 inspiring finalists this year which is fantastic. I would like to congratulate them all and wish our 5 regional award winners the very best of luck at the nationals.

“I would like to especially thank the support of our sponsors, LEO Limerick and AIB, and judges Martina Sheehan, Norma Purtill and Dr Michelle O’Dwyer who made this fantastic evening possible,” she continued.

The 18 finalists, representing a broad range of businesses, were joined by their family, friends and fellow members at the glamorous awards ceremony.  Also in attendance were sponsors Judy Tighe, AIB and Mary Killeen, LEO Limerick, along with Rosanne Heavey, National President of Network Ireland.

Cori Calvert took home the Emerging Business Award for Glás Éireann Solutions at the Limerick Businesswoman of the Year Awards 2018. Glas Éireann Solutions was founded in 2017 by Cori Calvert who serves as the CEO. In her previous role as a Managing Director for a United States Federal Government natural resources agency, she spent 20 years gaining experience in the environmental market leading the State of California as well as the Caribbean.

Emma Wilson of Azpiral took home the Employee Award at the Limerick Businesswoman of the Year Awards 2018. Emma Wilson is an Economics and Sociology graduate from the University of Limerick turned digital marketing advocate. In her first four years at Azpiral, she established digital marketing department, channels and processes for Azpiral and became the voice of Azpiral through her blogs.

Roseanne McDonnell of Art Business Summit took home the Arts Award at the Limerick Businesswoman of the Year Awards 2018. Rosanne is the Director and Lead Creator of Art Summit Ireland and a proud mother of four children.

Moira Geary of the Recombobulator was the winner of the SME Award at the Limerick Businesswoman of the Year Awards 2018. Moira is a businesswoman, speaker and author of Wake Up and Change Your Life and has a rare and proven ability to help people to achieve extraordinary results.

Core Optimisation won the Best Use of Digitial by a Company award at the Limerick Businesswoman of the Year Awards 2018. Caroline Dunlea accepted the award. Caroline is director and co-founder of Core Optimisation – Digital Marketing Agency.

Network Ireland Limerick provides a forum where women in business, the professions and the Arts can exchange business ideas and increase their business contacts. It encourages women to achieve more satisfying careers and promotes women as worthy contributors to the Irish economy. Network Ireland Limerick is a branch of Network Ireland, a national organisation driving the personal and professional development of women with over 900 members and 15 branches through the country.