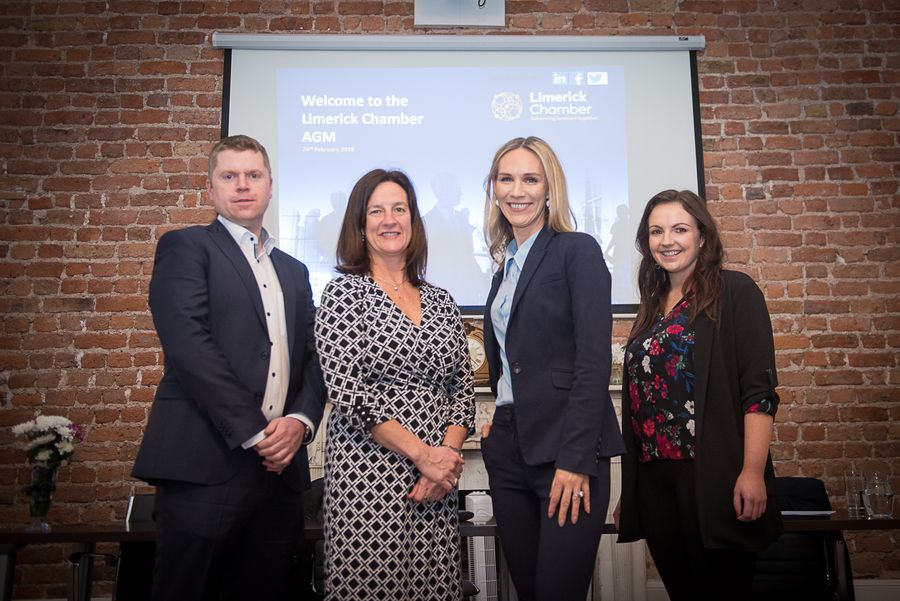 Dee Ryan, Chief Executive Officer, outlined activity highlights over the preceding 12 months and said that Limerick Chamber’s focus remains on adding value to each strand of our membership with high quality, relevant events and networking opportunities.

Dee gave an account of policy and advocacy work of the Chamber in the period and spoke about the success of the collaborative project between Limerick and Cork Chambers which played an important part in getting the M20 Motorway project included in the National Planning Framework.

Dee noted that in the year ahead the Chamber will be continuing to focus on the key growth enablers for the wider Mid-West Region.  The priority policy areas for 2019 are Aviation Connectivity and Public Transport requirements for the Limerick Region.

In addition to updating members on Limerick Chamber’s annual activity and the presentation of accounts, the AGM was the occasion to appoint new Directors to the Board for 2019.

This year two directors retired by rotation – Catherine Duffy, Northern Trust and Lavinia Ryan, VHI and their significant contributions to the Chamber was acknowledged.

Two new directors have been appointed to the board, namely Noel Gavin, Northern Trust and Miriam O’Connor, Sellors Solicitors.

Dermot Graham, AIB and Liam Flannery, Flannery’s Bar were both reappointed as Directors.

On behalf of Limerick Chamber, Dee Ryan was pleased to announce that Eoin Ryan, Partner, HLB McKeogh Gallagher Ryan agreed to serve as President for 2019/2020.

Eoin is a graduate of the University of Limerick. He is a Fellow of Chartered Accountants Ireland and a member of the Irish Taxation Institute. Eoin has worked with PwC, Horwath Bastow Charleton Limerick and BDO. Eoin advises in areas such as mergers and acquisitions, valuations, corporate restructuring, fundraising, business planning etc. Eoin has regularly been appointed a receiver, by most of the leading financial institutions and NAMA. He has also been liquidator to a significant number of companies across many sectors.

Outgoing President Dr. Mary Shire, Vice President of Research University of Limerick made her final public address in her role as President of the Chamber and gave a comprehensive account of developments in the wider regional economy in the past 12 months as well as highlighting challenges that remain for businesses.

Mary said that the highlight of her term was working with the board and Chamber team in the development of a new five-year strategy which will ensure the Chamber is relevant to its members and is the key voice of the business community in the city and region.

Dr Shire was thanked for her outstanding leadership and dedication to her role by Past President Ken Johnson and CEO Dee Ryan.  A presentation was made to Dr Shire as a token of appreciation and in recognition of the impact, she has made.

For more stories on the Limerick Chamber go here