By Richard Lynch on November 19, 2019@richanthon 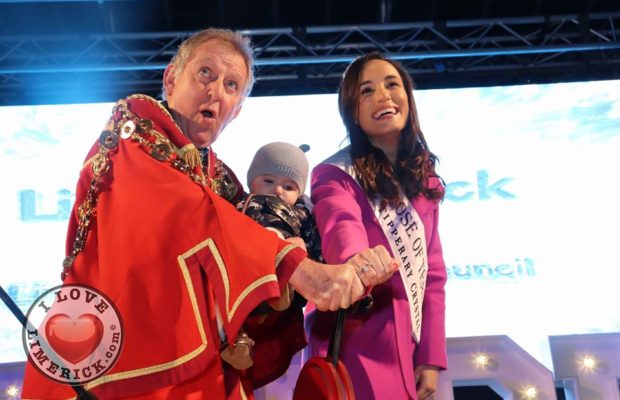 Christmas was unveiled in Limerick as thousands turned up for the Light Up Limerick 2019 ceremony. Picture: Kate Devaney/ilovelimerick

Claire O’Dowd is joined with Elysha Ní Chúláín and Enya Mc Intyre as they take a look at this week’s Local Business, Events, Sports, Arts and Entertainment news around Limerick.

To kick off this week’s episode of the, I Love Limerick’s Podcast show, We discussed Light up limerick and all the upcoming events during Christmas time in Limerick. Special guest of honor, Rose of Tralee Dr. Sinéad Flanagan joined Mayor of the City and County of Limerick Cllr Michael Sheahan at the Light Up Limerick ceremony, as well as special guests Santa Claus and the North Pole Elves.

The crowds were entertained from 4.30 pm by street performers and special guests including Limerick Youth Choir and Zion Vocal Ensemble along with panto characters from Limerick Panto Society’s Beauty and the Beast at the Lime Tree Theatre, and The Specsavers Limerick Panto Aladdin at the University Concert Hall, in the build-up to the main event – the turning on of the lights.

Next up we talked about the Draw Out Urban newest Exhibition.The first piece unveiled in a series of staggered reveals is a beautiful and powerful depiction of Constance Smith in the Medieval Quarter Limerick. A mural depicting the world-renowned Hollywood actress and Limerick native is the first in a series to be unveiled by Draw Out Urban Exhibitionists in conjunction with Limerick City and County Council who have been providing funding for the project.

Constance Smith was born in Limerick in 1928, who became a significantly prominent actress in Hollywood as a successful feature film favorite. The Constance Smith mural was honored by two artists from Ireland’s thriving artistic collective SUBSET. SUBSET is a Dublin-based artistic collective made up of painters, photographers, and videographers and Draw Out are honored to have hosted such a talented collective and that SUBSET put thought and effort into their research of Limerick.

Various sites throughout Limerick are in the process of being painted and will be presented to the public over the next few weeks, so keep your eyes peeled!

Next up we talked about  The Lorna Byrne Children’s Foundation, who is providing funding for Narrative 4 to work with students in two Limerick schools for an entire academic year.

This project will allow a large amount of the student body within these two schools to undergo a story exchange and connect with other students and groups within the school community. Using an evidence-based approach, it aims to bring a focus on empathy, connection, storytelling, creativity and improve the health and well-being of the young people taking part.

The schools that will be involved in the project are Thomond Community College and Coláiste Chiaráin Croom. Narrative 4 Facilitator and Writer Helena Close is working with Thomond Community College for the year, while Narrative 4 Facilitator and Artist Richard Hannafin are working with Coláiste Chiaráin Croom.

Next up we discussed The upcoming Light in the Darkness Lunchtime Talks. On Thursday, November 14, in Saint Mary’s Cathedral ‘Light in the Darkness Lunchtime Talks’ launched by campaigner, Vicky Phelan which features four inspirational speakers who will be sharing their experiences of overcoming difficulties, over the next 4 Fridays starting November 29.

There will also be talks from Leona O’Callaghan from The Limerick Heaven Hub,  followed by North Star Family Support Project Coordinator, Joe Slattery who is an addiction counselor. Friday, November 13, Una Burns from NOVAS is set to speak to the crowd at Saint Michael’s regarding the work NOVAS does for the homeless. The final talk of the series takes place Friday, December 20 and is with Father Peter McVerry of the McVerry Trust.

And finally, they discussed the Opera Workshop newest partnership with Hands in Harmony Deaf Community Choir on a performance and film project that combines Irish Sign Language and music.

The two organizations have been working together with Limerick-based film-maker Lucy Dawson, in a series of workshops that explore through music and performance the big issues and the daily obstacles for members of Limerick’s deaf community. This project was made possible through funding from the Limerick City & Council Arts Department, Creative Ireland – Made in Limerick Grant.

It draws awareness to the deaf community and the language barriers that deaf people experience in wider society due to a lack of understanding of their language, culture, and history. If you want more info regarding the opera workshop you can visit operaworkshop.ie