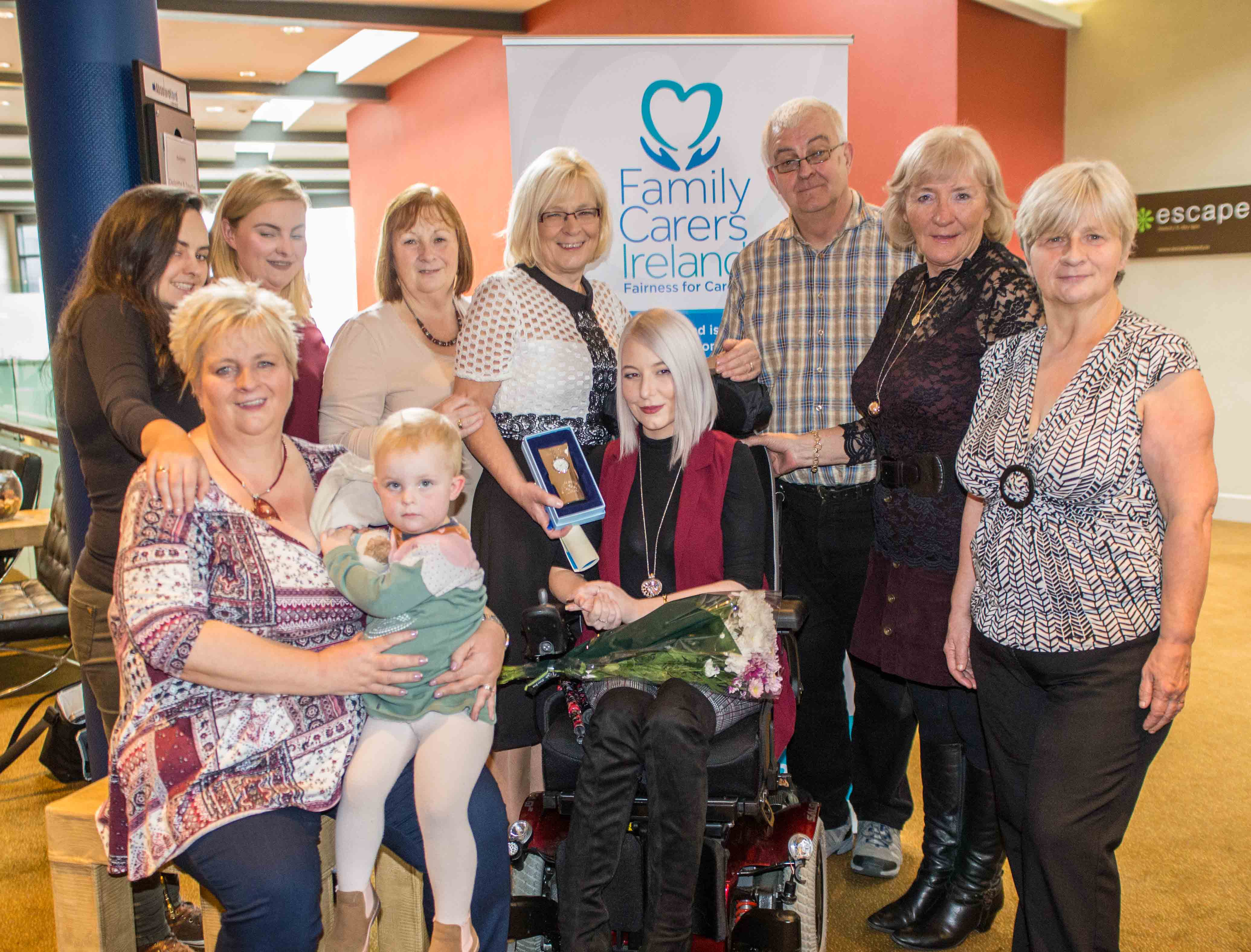 Of the 25 nominees from all over Ireland, Dorothy has been awarded the overall award for Carer of the Year having recently won the title of Mid West Carer of Year at the Absolute Hotel. Family friend, Laura Fitzgerald represented Dorothy at the awards ceremony in Dublin on Wednesday, 16 November.

Fianait Mitchell, Family Carers Ireland spoke highly of Dorothy’s achievement and what it means for carers of the Mid West:

“It’s great to recognise the care Dorothy provides for her daughter Zondra and the care she provided for her late mother. To have an overall winner in the Mid West is amazing for all carers in the region, it shows that their hard work is not going unnoticed.”

Dorothy was nominated by her daughter Zondra whom she cares for full time.  Zondra suffers from a connective tissue disease called Ehlers-Danlos Syndrome.  Zondra also has paralysis of her stomach and has cervicocranial instability and Chiari Malformation.  Zondra has huge neurological problems as a result of her condition.  Unfortunately, there are no specialists in her condition in Ireland and has to travel to the UK for specialist care every 3 months. Dorothy had to give up work to care for Zondra full time.

Dorothy’s daughter, Zondra said in a statement, “I never wished my condition away more than I have this past week. It always gets in the way of everything but when it’s in the way of you and your families grief it is too much. My mam lost her mother, my grandmother, on Thursday morning but when you are a carer that role still has to continue. We still had to get on a flight to London on Saturday morning where I receive specialist medical care every 3 months, unavailable to me in Ireland.”

Zondra spoke of the important role her grandmother and mother play in her life, and how tough it was to return home without filling her grandmother in on the journey to London for treatment.

Zondra added: “I never thought I’d progress to a stage where I’d need full-time care and lose my independence. But when you have a good carer by your side they won’t make you feel like a burden. You have to keep each other strong. One benefit of all of this is that my mam is truly my best friend now.

“Eds is a genetic under-treated condition in Ireland. As I have a lot of complications that make my case complex I was very very lll and there were no specialists to treat all the comorbidities of eds here in Ireland. My mam, friends and family fundraise for me so I can self-fund to go every three months. This helps with symptom control but every day is different with these conditions and my mam cannot plan anything in advance as she is looking after me.

Zondra, speaking of the pride her grandmother had in Dorothy winning the Mid West Carer of the year award, the Limerick woman said it was a lovely memory that would stay with them forever. Zondra concluded, “I want to thank everyone for that moment and for giving my mam the recognition she really deserved with the Midwest carers award she won. It will forever be a moment we will never forget.”

You can find more information on Family Carers Ireland here.
Here you can read about the Mid West Carer of the Year Award.