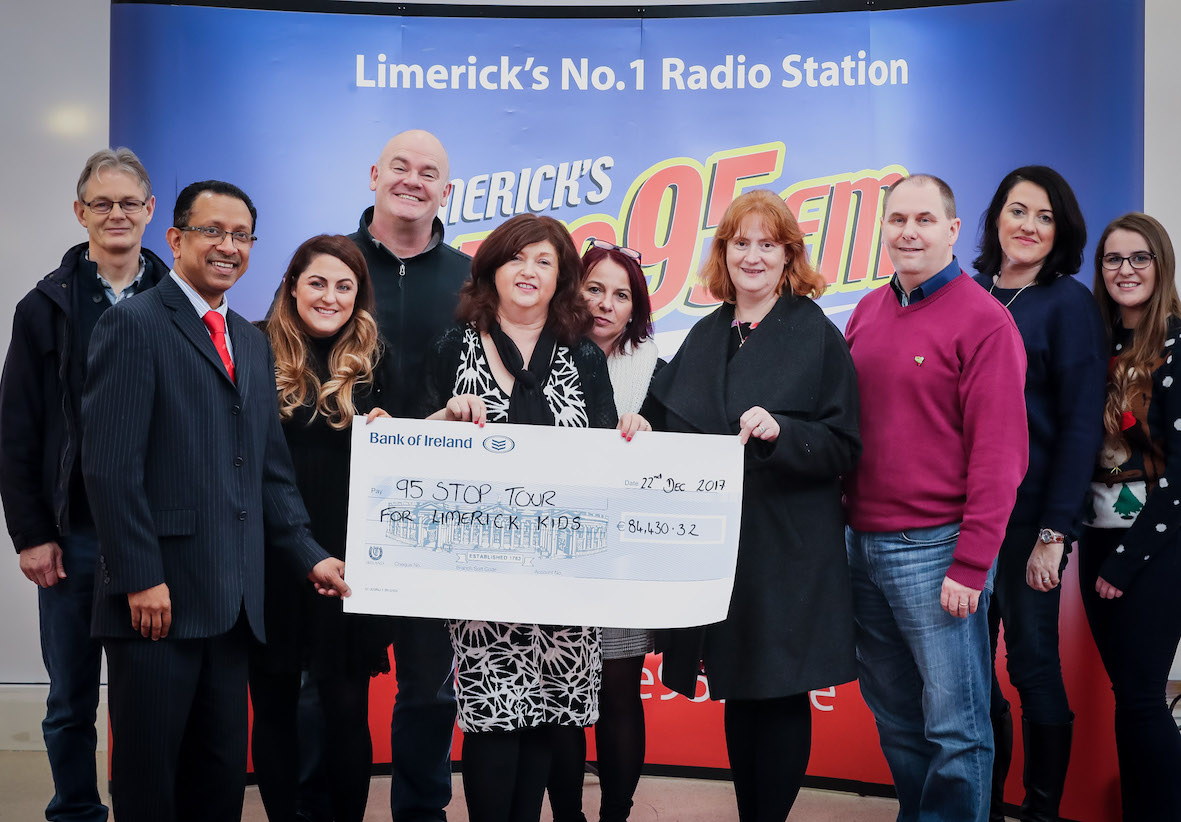 This is the 8th year that listeners of Limerick’s Live 95FM have raised funds for the Children’s Ark Unit at University Hospital Limerick (including the Neonatal Unit at the University Maternity Hospital) and CARI Limerick, bringing the total raised to over €600,000, thanks to the people of Limerick.

“Limerick’s Live 95FM are delighted to be involved with these fantastic causes. I am so happy with the amount that was announced today and knowing that it all goes to ill and vulnerable children in Limerick is an incredible achievement for everyone at Limerick’s Live95FM and for everyone in Limerick who contributed. I am overwhelmed by the support we received and cannot thank enough each and every person who contributed to the success of this year’s 95 Stop Tour’” said Nichola Quinn, Limerick’s Live 95FM’s 95 Stop Tour Co-ordinator.

The Live 95FM team began their 95 Stop Tour of Limerick City and County in September however events took place from mid-June. The presenters and Live 95FM Shadows visited the public in the communities and organisations that helped to raise money for these chosen charities.

Live 95FM’s Limerick Today Show with Joe Nash, broadcast live from three locations over the week of the Tour, visiting the Red Door in Newcastle West, CARI on the Ennis Road and broadcasting from the Strand Hotel to end the week. Some other highlights of the Live 95FM 95 Stop Tour include the Afternoon Tea at the Strand which raised over €12,000 in one afternoon. A number of teams including a staff team from Limerick’sLive95FM took part in The Jeff Power Memorial Soccer Tournament raising €5,000 and the first charity Pop-Up Gaeltacht in Limerick took place in Chez la Fab raising money and spirits throughout the day.

CARI Limerick provides a professional, child centred therapy and counselling service to children, families, and groups who have been affected by the sexual abuse of children. Without the support of Live 95FM’s 95 Stop Tour each year, this service would not exist in Limerick.

“I am delighted with the amount announced this morning. I have such gratitude and appreciation for everybody who has helped us over the last few months. This money goes so far in CARI and directly helps every child who comes through our door. It has been wonderful to see so many people here, who have helped us throughout Live 95FM’s 95 Stop Tour and many thanks to the people who have helped us, over the last eight years as well. Thanks to Joe, Julie and Nichola and the whole Live 95FM team” said Mary Madden, Community Employment Supervisor with CARI Limerick.

Fundraising over the last 8 years has been invaluable to the Children’s Ark Unit who have been able to purchase valuable critical care equipment, to provide appropriate care to children in the Mid-West.

“It is truly remarkable the hear that €84, 430.30 has been raised for the Children Ark and the Neonatal Unit. It is a great moment for the children of Limerick that Limerick’s Live 95FM, with their commitment to care in the community, have continued to support the Children’s Ark, including the Neonatal Unit. Thank you so much to everyone in Limerick who helped raise money, for this great cause. This will do so much for the children and babies in the Neonatal unit” said Dr. Roy Philip, Clinical Director at the Children’s Ark Unit at University Hospital Limerick.