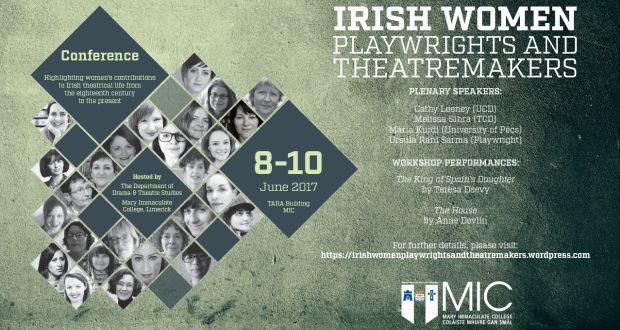 Mary Immaculate College to Shine the Light on Irish Women Playwrights and Theatremakers  – The conference was inspired by Waking the Feminists, a grassroots movement that sprang up in reaction to the Abbey Theatre’s male-dominated Waking the Nation programme

When the Abbey Theatre announced its 1916 centenary “Waking the Nation” programme, Irish theatre fans and practitioners were rightly outraged that only one of the ten plays being produced was written by a woman. The outcry over that gender-imbalanced programme led numerous Irish women to take to social media and vent their justified anger.

The “Waking the Feminists” (WTF) initiative was born, and this important grassroots movement has done much to highlight the prejudice regularly endured by women working in Irish theatre, yesterday and today.

According to Dr David Clare, lecturer in Theatre Studies, Mary Immaculate College, and conference organiser, “During the debates that broke out in response to the WTF campaign, one repeatedly heard male and female commentators insisting that there are far fewer Irish women writing plays than there are Irish men. This is simply not the case – rather people are unaware of how many great women playwrights this country has produced over the centuries”.

He explains that there may be a number of reasons for this ignorance such as the difficulty Irish female playwrights continue to face in having their works produced by Ireland’s major theatre companies and venues.  As a result, they are forced to debut their new work in London, Edinburgh and New York as has been the case with Christina Reid, Anne Devlin, Stella Feehily, Deirdre Kinahan, Lucy Caldwell, Lynda Radley, Lisa Tierney-Keogh, and conference plenary speaker Ursula Rani Sarma.

According to Dr Clare “Scholars with an interest in plays by women may know how strong many of these plays are, but the average punter can be forgiven for not having hunted downplays that have never been produced, published, or stocked by bookshops in Ireland”.

The second way in which Irish women dramatists have been effaced from the historical record is the reluctance of theatres to revive their successful plays. Since the early eighteenth century, Irish women have been writing plays that were hits on the British and/or Irish stages but, despite being brilliant classics, they are never revived after their opening runs.

The third way in which Irish women playwrights have been marginalised relates to publication.  Even when a female Irish playwright pens a successful play they are much less likely than men to see those plays get into print. As such, important plays by the likes of Mary Manning and Winifred Letts were never published during their lifetimes and are now subsequently lost.

Irish Women Playwrights and Theatremakers, hosted by the Department of Theatre Studies, MIC, will shine a light on such discrimination and will draw attention to plays that deserve to be widely known in Ireland.  Topics covered will include important directors, scenographers, actors, and contemporary devisers.  Irish-language drama, Theatre for Young Audiences, and the intersection between feminist politics and Irish theatre will also be probed.

The conference will also include performances of Teresa Deevy’s The King of Spain’s Daughter (as performed by students from MIC’s BA in Contemporary & Applied Theatre Studies programme) and Anne Devlin’s The House (as performed by Cork actor/playwright and MIC PhD candidate Aideen Wylde). There will also be a roundtable discussion involving women practitioners from across the island; this will highlight the challenges facing women working in Irish theatre today. Irish Women Playwrights and Theatremakers takes place 8-10 June, Mary Immaculate College.