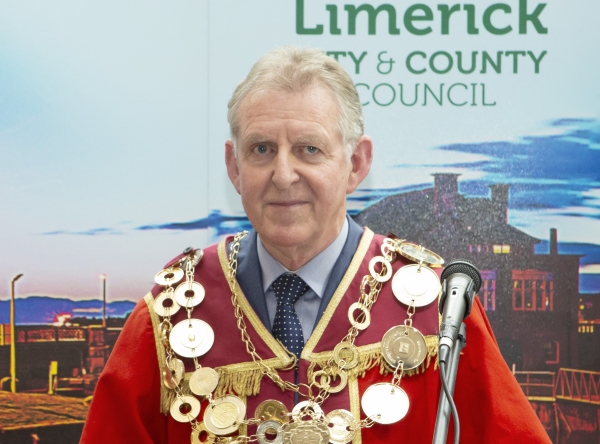 Fine Gael’s Michel Sheahan has been elected the new Mayor of the City and County of Limerick.  He was proposed by party colleague John Sheahan and seconded by Fianna Fáil’s Michael Collins.

In a packed council chamber in Dooradoyle, family and friends of Cllr Sheahan gathered in expectation ahead of the election, including his three- month old only grandchild Courtney.

It was a special occasion for 16 other councillors who were attending their first ever council meeting as elected representatives following the local elections last month.

Outgoing Mayor, Cllr James Collins was thanked for his year as the first citizen of Limerick, with tributes being paid across party lines for his contribution to Limerick and the championing of various issues over the past 12 months.

First-time Cllr Brian Leddin (GP) was proposed for the position of Mayor by his party colleague Sean Hartigan and seconded by Labour’s Joe Leddin.

Cllr Sheahan was elected by a 30 to 10 majority to become the sixth person to be elected as Mayor of the City and County of Limerick since the amalgamation of the two Limerick local authorities in 2014.

In his winning address, Mayor Michael Sheahan said: “It’s a great honour to be elected the sixth mayor of Limerick City and County. It is an emotional honour for me as it is with great pride and happiness that I become Mayor.”

One of the main issues that the new Mayor is prioritising is the environment.  He added: “Limerick, along with Ireland faces major environmental changes in the next few years and I want to work with all those groups and individuals who want to make a positive impact on Limerick.”

The new mayor also thanked the McManus Family for their great work and ongoing support of community groups and organisations across Limerick.”

The election of the Mayor of the City and County of Limerick begins a series of annual meetings over the coming weeks for the Metropolitan and Municipal Districts in Limerick.