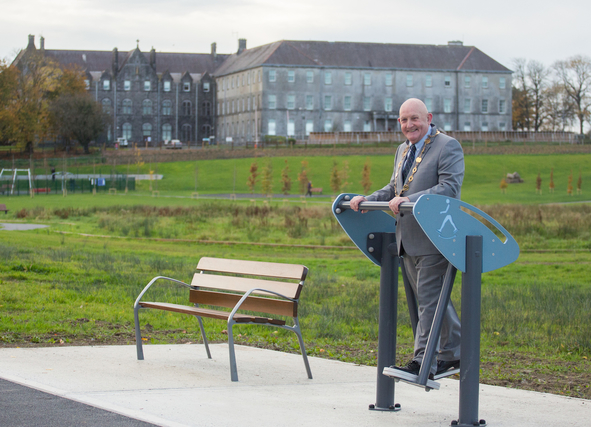 Mungret Park Exercise App is a first for Ireland

A new smartphone App has been launched for Mungret Park to help people get active for 2017.

Limerick City and County Council along with Kompan, who designed and installed the playground and parkland equipment, developed a new training solution, which is the first of its kind in Ireland.

The training site is for everyone meaning that all users have a complete training programme for all fitness levels specifically tailored to the equipment at Mungret Park.  The App not only tailors the workout for the person but also fully demonstrates each exercise in time with the user.  This facility is a huge step forward in making communities active as the App also links with social networks to build an interactive workout for groups of users.

The Mungret Park Exercise App which is free is called Kompan Sport & Fitness and can be downloaded for iOS and Android phones.

Tara Flanagan, Senior Executive Engineer with Limerick City and County Council said: “The introduction of the new App is another way that will allow people to use and enjoy Mungret Park to its fullest potential.”

“We’ve had great feedback from members of the public about the park since it opened in August.  Our vision is that the park is for all, from the young to the old, regardless of fitness levels.  The specialist play equipment in the park allows children of varying abilities to enjoy themselves, while the new app will allow tailored training solutions for people using the exercise equipment dotted around the park.”

Keith Walker, Sales Manager with Kompan said: “We’re delighted to have teamed up with Limerick City and County Council in creating this App which is essential a virtual instructor. Users will be able to download the App and get a detailed programme for the workout machines at Mungret Park.”

“It is the first of its kind in Ireland and we are hoping that more local authorities will follow Limerick’s lead and use the App to help people get fit.”

For further information on Kompan Sports and Fitness, visit their website here.
To read more on Mungret Park, click here.