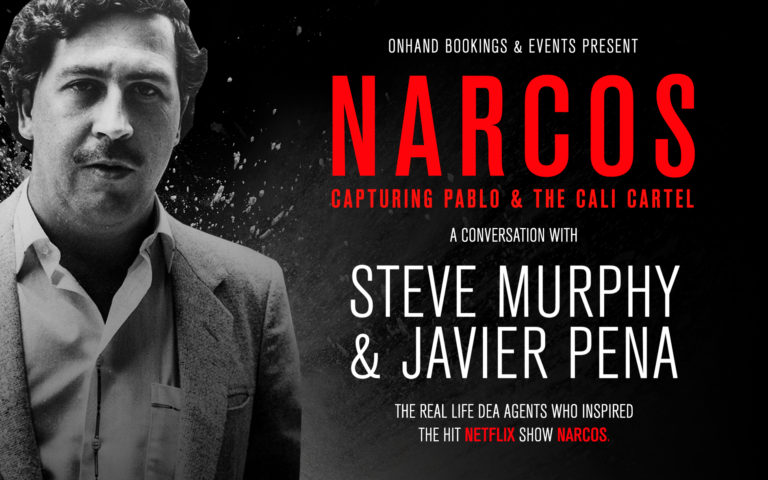 The Narcos: Capturing Pablo & the Cali Cartel event will take place on Monday, May 21 at 8 pm in the Lime Tree Theatre.

The actions of Pena and Murphy were the inspiration for the hugely popular Netflix crime series Narcos, which tells the story of Colombia’s infamous drug cartels and Pablo Escobar’s fight to maintain his position as the most powerful player.

Javier Pena was brought up in Kingsville, Texas and in 1984 he joined the US DEA. Four years later the Retired Special Agent in Charge volunteered for an assignment in Bogota, Colombia. It was there that Pena and his partner, Special Agent Steve Murphy, set out to bring down the Medellin drug cartel and its leader Pablo Escobar.  Pena was awarded Colombia’s highest honour for his efforts and received commendation awards from the DEA and the wider international community. He is regarded as an expert on the subject of the Medellin Cartel.

Steve Murphy began his career in 1975 as a Police Officer in the City of Bluefield, West Virginia. In 1987, Murphy joined the DEA as a Special Agent and was assigned to Miami, Florida where the cocaine trade was exploding. In 1991, Special Agent Murphy was transferred to Bogota, Colombia. It was there that Murphy and his partner, Retired Special Agent Javier Pena, targeted the notorious narco-terrorist Pablo Escobar and the Medellin Cartel.  Murphy received multiple honours and awards, during his career, including ‘DEA Special Agent of the Year’ and the ‘Distinguished Service Cross’ from the Republic of Colombia.

Tickets for the Narcos: Capturing Pablo & the Cali Cartel event are €36 and available here.

Limerick Chamber Thomond Park hosts the Journey of an Entrepreneur