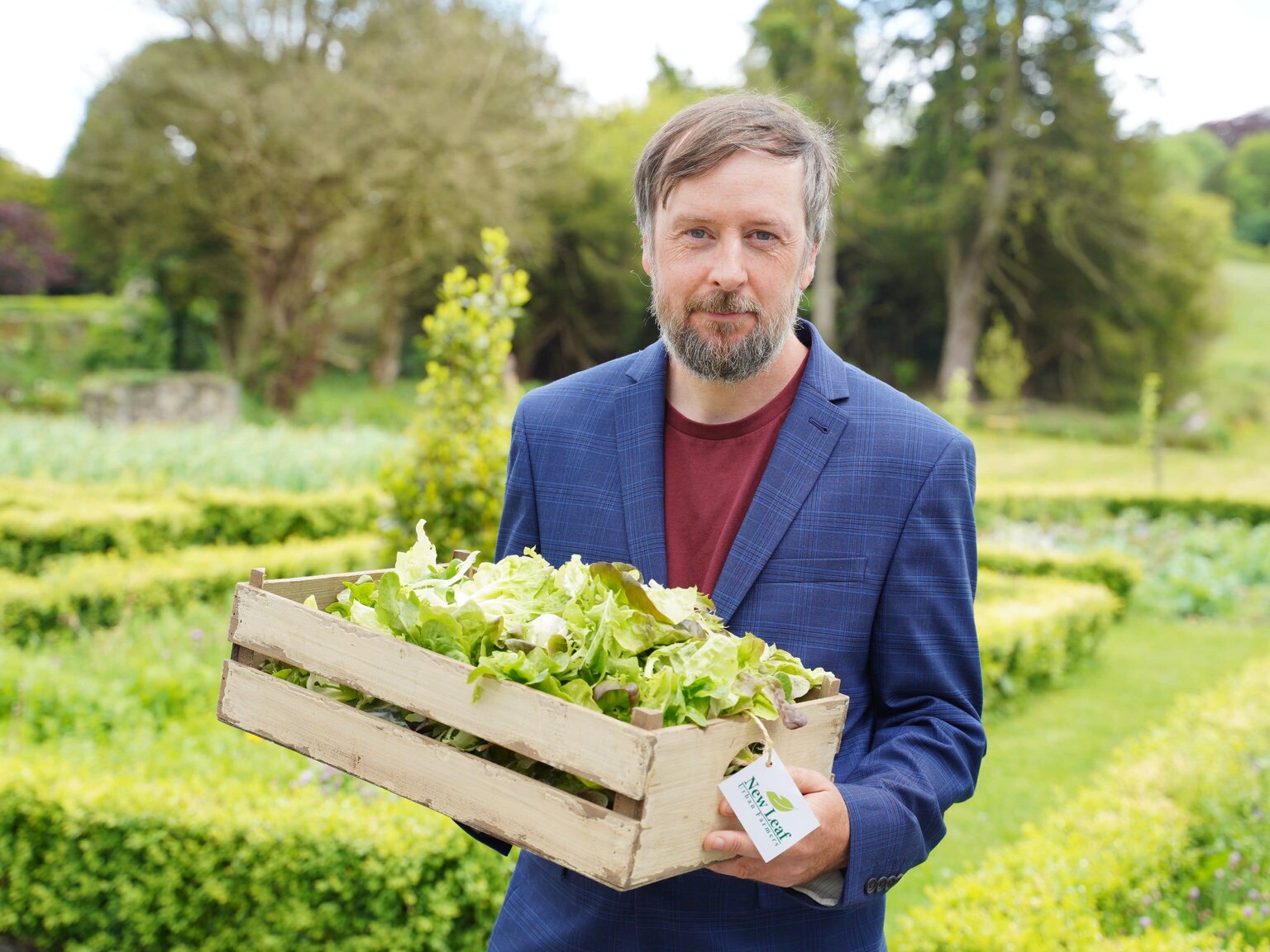 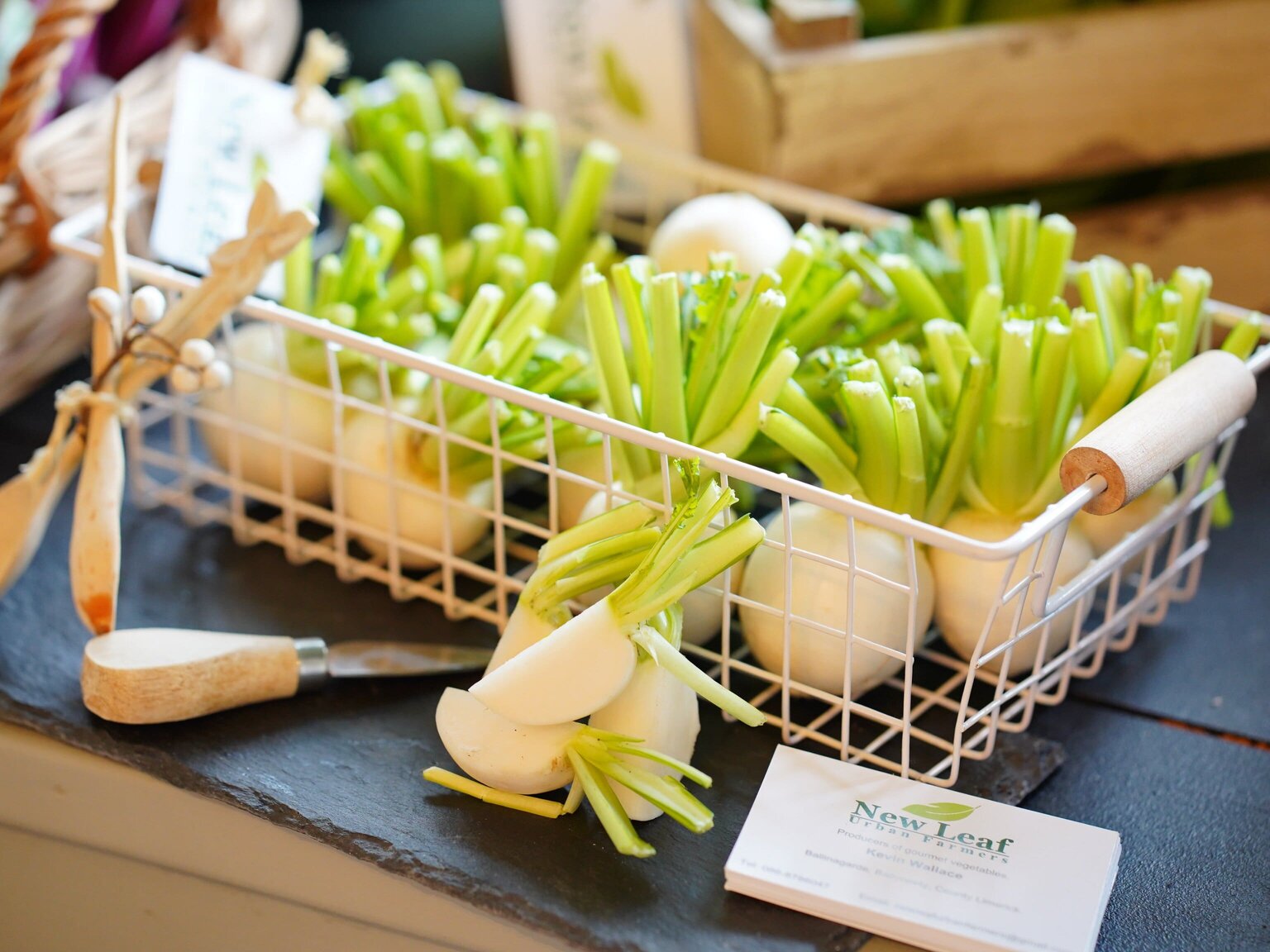 Some of their award winning hakurei turnips pictured above

Award-winning producer, New Leaf Urban Farmers, which is based in Ballyneety, Co. Limerick, has just launched ‘Beyond Organic’, an innovative new Community Supported Agriculture (CSA) Vegetable Box Scheme – the first of its kind available in Ireland.

By definition, Community Supported Agriculture is a partnership between a group of people and a farmer. Members receive a share in the CSA when they commit to pay an agreed fee to the farmer for the duration of a season, and in return they get healthy, local food produced in an agroecological way.

‘Beyond Organic’, named so because of the ancient Korean Natural Farming methods – which take advantage of indigenous microorganisms to produce fertile soils that yield high output without the use of herbicides or pesticides – that New Leaf Urban Farmers’ Founder, Kevin Wallace, practises to grow his much sought after baby vegetables and salads, will provide as many as 50 local families (members) with a weekly haul of freshly picked seasonal and restaurant quality ingredients in 2021. These will include Kevin’s own Irish ginger and garlic, with numbers set to increase to 150 households in year two.

Kevin, who originally hails from Broadford, Co.Clare and lived in South Korea with his wife, Hellen, for two years, is the first known vegetable farmer in Ireland to use Korean Natural Farming methods to grow on a commercial scale, doesn’t come from a farming background and is completely self-taught.

During his time in South Korea, Kevin became acutely aware of how much land and space was a primary issue for living there. 70% of South Korea is covered in mountains. There is a constant struggle between agriculture and residential development – space is precious. How South Koreans have reacted to that is something that had a profound effect on him. In South Korea, most urban spaces are very well planned and thought out. High-rise apartments dominate even small towns. Yet, between blocks of residential complexes are parks and exercise areas and also where people grow food. The realisation from living there was how we use the space available to us is of critical importance.

On returning to Ireland Kevin pursued an M.A. in Youth, Community & Social Regeneration and based his Masters thesis on community initiatives that focused on food sovereignty  within urban settings. Through his research with the growing food community at The Urban Co-op in Limerick, what became clearly evident was that there was a complete lack of vegetable producers in Limerick city and county at that time. This gave Kevin the impetus to begin farming himself in 2016.

Having started New Leaf Urban Farmers four years ago with a budget of just €800 (€600 for the rent of the one acre plot and just €200 for tools and materials), it is through his own inquisitiveness, unwavering commitment, and help along the way from a steady flow of energetic WWOOFers (a worldwide movement that links visitors with organic farmers, promoting a cultural and educational exchange), that has brought about his much deserved recent success – New Leaf Urban Farmers was recognised as one of the country’s top produces when it was named Euro-Toques’ National Craft Award Winner in 2019.

New Leaf Urban Farmers is now well-known amongst the finest restaurants for the quality and innovation involved in growing Kevin’s produce and is a regular supplier to several Michelin starred restaurants both here in Limerick and throughout the country.

Kevin, who had just enjoyed his most successful year in business in 2019, has been forced to completely reconsider his business model following COVID-19 and the subsequent closure of many of the restaurants that New Leaf Urban Farmers had been supplying. He is now broadening his customer base, which will enable him to nourish consumers with a spectacular array of hand-picked produce in 2021. It was following huge demand for his produce from discerning locals in recent months, keen to reconnect with their food and nourish themselves and their families with his quality naturally grown ingredients, that he landed on the CSA vegetable box scheme concept.

Reacting to the launch of ‘Beyond Organic’, New Leaf Urban Farmers Founder, Kevin Wallace, commented: “I’m extremely excited to finally be in a position to bring my knowledge and expertise to local families throughout the county of Limerick. Farming is one of the most noble professions and with it comes a responsibility to produce vegetables that not only look and taste good but are also nutritious and healthy. We have lost our connection to our food sources and I aim to bring that connection back, in some small way, to families right here in Limerick. Korean Natural Farming allows me to bring balance into my soil and help replenish the nutrients lost from producing crops.”

Families and individuals signing up and committing to support the scheme will receive an assortment of restaurant quality groceries that will change each week based on the seasonality of ingredients. These are set to include exotic items such as naturally grown Aztec broccoli, Purple cauliflowers, Peruvian chilli peppers, Ginger, Black garlic, and Roscoff onions, that customers will collect directly from Kevin’s farm in Ballyneety, Co. Limerick for a period of six months, from June to November 2021.

Included in each weekly box will be a selection of Keith Pigott’s (Head Chef at One Pery Square Hotel, Limerick) favourite recipes which will correspond to that week’s haul. Moreover, a series of ‘how to’ videos by Keith and several of Ireland’s finest chefs will also be available to customers that will include not only cooking demos, but also top tips on making the most from your box and to minimise waste.

The ‘Beyond Organic’ vegetable boxes on offer will range in price from €25 – €50 depending on each customer’s individual requirements and the size of their household. In order to sign up to the scheme, customers will be required to pay 50% up front with the remainder to be spread over further payments in June, July and August.

To register an interest, and to sign up, please visit HERE