No Show Game is a charity fundraiser that aims to sell out Thomand Park for a fictional game.

Shannon RFC is delighted to bring you “The No Show Charity Game” – a game that won’t take place but they would like to sell out anyway! On June 5, at 8 pm Shannon RFC hopes to break a Guinness World Record by selling out Thomond Park for a fictitious game featuring the “Best Limerick XV” vs the “Best Irish XV”.

The fundraiser will benefit local community charities as well as national ones. The aim is to sell out Thomond Park for a game that will never take place asking people to stay home to show their support. Shannon RFC has confirmed some well-known names in Irish Rugby to take part in this event also. 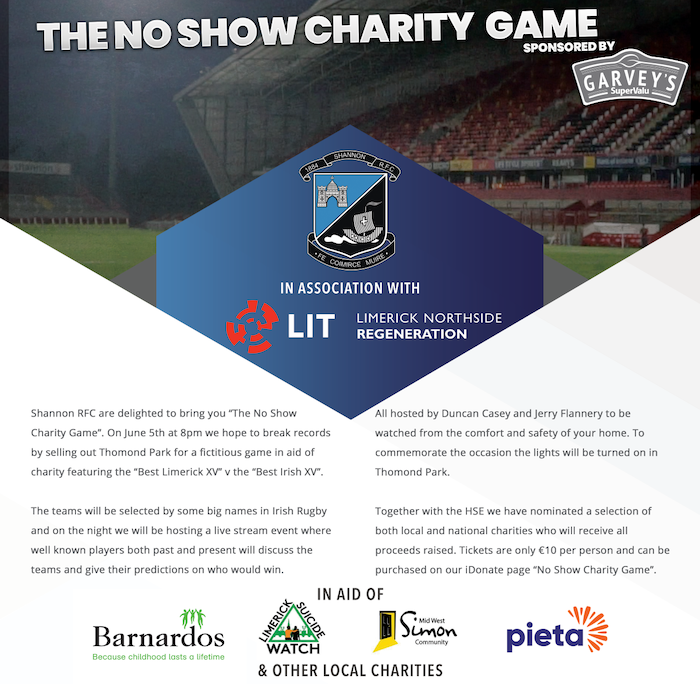 Shannon RFC has nominated a selection of charities such as Barnardos, Mid-West Simon Community, Suicide Prevention, Pieta House and other deserving local charities.

The teams will be selected by some big names in Irish Rugby and on the night they will be hosting a live stream event where well-known players both past and present will discuss the teams and give their predictions on who would win.

All of this will be hosted by Duncan Casey and Jerry Flannery and will be premiered on Shannon RFC social media channels to be watched from the safety of your home. To commemorate the occasion the lights will be turned on in Thomond Park.

Together with the HSE, Shannon RFC has nominated a selection of charities such as Barnardos, Mid-West Simon Community, Limerick Suicide Watch, Pieta House and other deserving local charities who will receive all proceeds raised.

Katie McCloskey, Shannon RFC Press Relations Officer said, “Shannon RFC is committed to being a positive presence in our community. We have linked up with some fantastic charities both national and local who we feel are driving forces for positivity and beacons of hope for the more vulnerable in our society. We hope that the success of The No Show Charity Game will aid these charities in their time of need and are delighted to have the opportunity to bring this event to the community.”

To purchase tickets for the No Show Charity Game, click here.