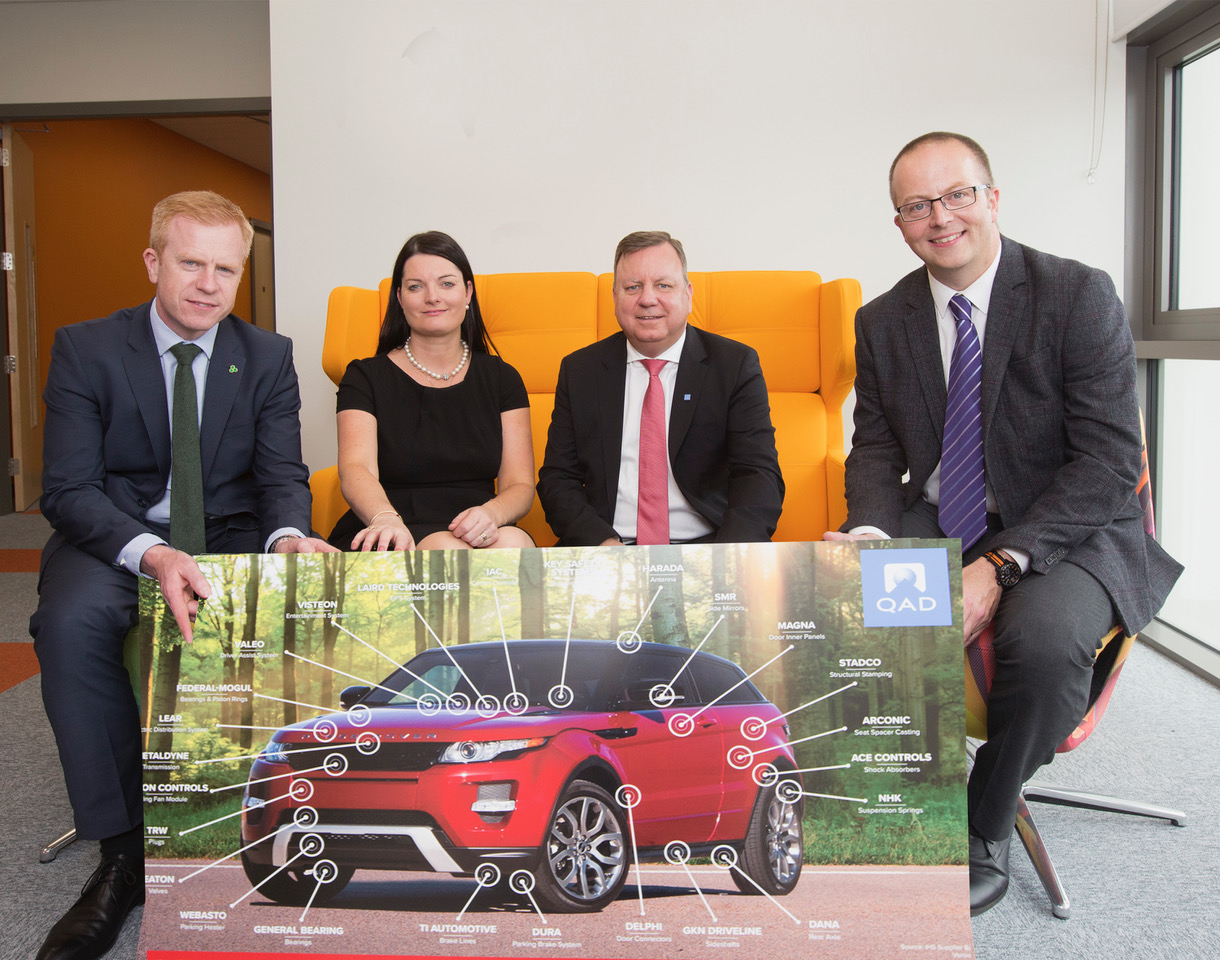 Pictured at the opening of QAD in Limerick the the leading software provider were Donal Travers, Department Head of Technology Division, IDA, Anne-Marie Tierney, Head of Regional Business Development, IDA, Stephan Gardner, Senior Vice President, EMEA, QAD and Paul Newton, Research and Development Director, QAD.
Photograph Liam Burke/Press 22
QAD to create 40 new jobs between its Limerick and Dublin offices in next 3 years
QAD, a leading provider of flexible, cloud-based enterprise software and services for global manufacturing companies, announced today that it will expand its operations in Ireland and expects to create up to 40 new jobs between its Limerick and Dublin offices over the next three years, bringing the total number employed by QAD in Ireland to over 140. The development is supported by the Irish Government through IDA Ireland.
Founded in 1979 and headquartered in Santa Barbara, California, QAD Inc. employs over 1,900 people in 29 offices worldwide. QAD Adaptive Applications, their software solution portfolio, helps companies to manage resources and operations, enabling them to operate more efficiently and effectively with their customers, suppliers and partners, and turn industry disruption into a competitive advantage.

QAD intends to add more than a dozen software development and quality analysis positions in Limerick over the next three years to augment its existing 55-person workforce. The new headcount will support the company’s continuing development and implementation of the company’s next-generation ERP solution, QAD Adaptive ERP. The company has invested in new, larger offices in Clive House, at the National Technology Park to accommodate the increased workforce.
In addition, QAD Precision, a division based in Dublin, will move to a larger headquarters on Ardee Road in Rathmines. The company currently employs 53 staff in Dublin and plans to add more than 20 new positions over the next three years for software engineers and business development professionals.
QAD Precision provides industry-leading global trade management, transportation execution and multicarrier shipping software, and helps global enterprises manage over 3 billion shipments annually. It delivers solutions that enable customers to mitigate risks associated with operating in dynamic trading environments, minimise shipping costs and avoid compliance delays.
Speaking at an event in Limerick today to announce the expansion and celebrate the company’s 20th anniversary in business in Ireland, the Senior Vice President, EMEA Steve Gardner said, “QAD is delighted to welcome Minister of State, Patrick O’Donovan TD, to officially open our new Limerick office. The minister’s presence acknowledges the significant contribution that QAD and QAD Precision have made to employment and enterprise software innovation in Ireland over the past two decades, culminating with this summer’s opening of our new office in Limerick and QAD Precision’s new office in Dublin. Ireland has a highly skilled and talented workforce, which we believe is fundamental to developing and implementing QAD Adaptive Applications for its customers, both globally and in Ireland.”

Minister of State at the Department of Finance & the Department of Public Expenditure & Reform, Patrick O’Donovan TD, who attended this afternoon’s event in Limerick, welcomed the announcement saying, “This expansion by QAD, which will see up to 40 new roles being created between the two offices, is very welcome news for Limerick and the MidWest Region and for Dublin. It further enhances Ireland’s reputation as a technology and manufacturing hub and proves that the skills pool to help companies like QAD to grow and develop their operations is available in regional locations as well as in our capital. I wish them every success.”
IDA Ireland’s Executive Director Mary Buckley said, “QAD is a well-established global company in the manufacturing ERP software market and an important part of Ireland’s software enterprise cluster. This expansion adds to the technology and manufacturing ecosystems that have developed in both the MidWest region and Dublin. It demonstrates a substantial commitment from the company to its Irish operations and is a strong endorsement of the availability of talent with quality technology expertise. I wish them continued success here.”
For more information on the new roles, click here.
For more stories about technology, click here.