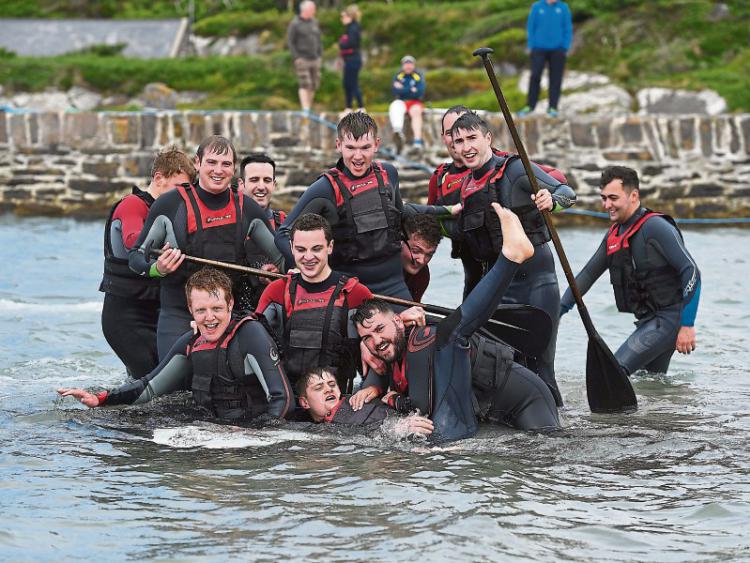 Five Limerick lads graduate from Boot Camp to be among 64 Rose Escorts 2017 at Rose of Tralee Festival. Photo: Dominic Walsh

Five young Limerick men have got what it takes to be the perfect gentlemen and have been selected to be among the 64 Rose Escorts at this year’s Rose of Tralee International Festival from 16 to 22 August.

Paul Fitzgerald (23), Gerard Horan (26), Brian O’Doherty (25), Briain Og O’Sullivan (25) and Seamus Richardson (28), who already came through an interview process at the Glen Royal Hotel in Maynooth in April, were put through their paces over the Bank Holiday Weekend at the annual Boot Camp along the Wild Atlantic Way in Kerry.

They had to pass a number of endurance tests and team-building exercises before they could graduate as fully-fledged Rose Escorts 2017.

The Rose of Tralee International Festival’s Communications Manager, John Drummey, said: “The Rose Escorts 2017 spent three days in Kerry where they undertook a number of gruelling, yet fun, tasks to prepare them for the festival in August. It was not because the ladies love Milk Tray but because the lads prefer Roses. Around 200 men aged between 21 and 30 applied to become Rose Escorts at this year’s Rose of Tralee International Festival and following a detailed interview process, the final 64, the most ever, were selected to take part in a Boot Camp weekend in the Kingdom to help them cope with the demands of a busy week in Tralee.”

The lads had to carry out a range of activities including a hike over Mount Brandon – Ireland’s second highest mountain – cliff diving, water-skiing, cycling, turf-footing, abseiling, kayaking, surfing, ironing and sewing in order to prove they will have the stamina to be a Rose Escort.

This year’s Rose Escort Boot Camp activities were supported by Kerry County Council and Kerry Civil Defence, under Civil Defence Officer Tom Brosnan, who played a major role in the transport and logistics of the event.

Over the course of the weekend, the Rose Escorts 2017 experienced the visitor facilities in Castlegregory, Derrynane, Waterville, Valentia Island, Dingle, Kerry Head and Tralee.

Looking ahead to the year’s Rose of Tralee International Festival, one of the 64 lads will be selected as the Rose Escort of the Year live on RTÉ One on Monday 21st August.

The 2016 Escort of the Year, John Slowey from Enniskillen, Co Fermanagh, said: “Having been selected as the Escort of the Year was nothing short of a great honour. The opportunity to represent a fantastic group and to accompany our Rose of Tralee, Maggie McEldowney, at numerous events has been a brilliant experience. I’ve travelled extensively attending many charity events and Rose reunions while also working closely with a fantastic Rose of Tralee Team who couldn’t have done anymore for me. I’ve made memories and friendships that will be cherished forever.”

The 2017 Rose of Tralee International Festival will take place from 16-22 August when a full line-up of FREE family-fun entertainment is planned for the streets of Tralee with Nathan Carter and the Ronan Collins Showband Cabarets Shows, Fashion Show, Rose Ball and televised selections presented by Dáithí Ó Sé, set to fill the Festival Dome.

To read more about the Rose of Tralee click here