By Richard Lynch on April 8, 2019@richanthon 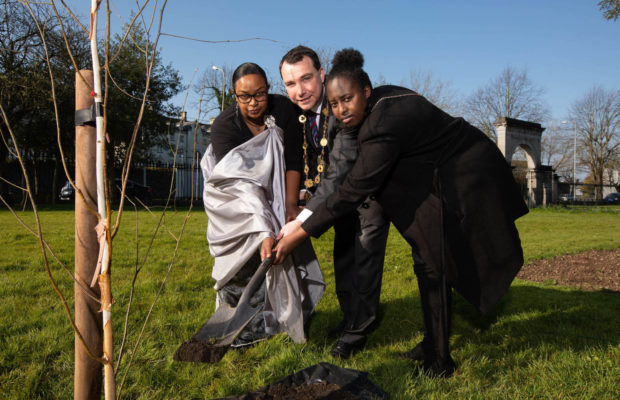 Chantal Mutesi, The Mayor of Limerick City and County of Limerick, Cllr James Collins, and Egwyge Roussard plant a tree at the solemn gathering in Limerick for the 25th anniversary of the 1994 Rwandan genocide. Picture: Sean Curtin True Media.

Last Sunday a Rwandan national whose family was devastated by the 1994 Rwandan genocide has admitted on its 25th anniversary that not even time can heal the wounds.

Chantal Mutesi came to live in Ireland to make a new life after the horrific genocide claimed the life of her husband, four brothers, a sister, her mother and other members of her extended family and friends.  She survived with her three-week old baby, who has grown up in Cork and next month, at the age of 25, will go to her homeland for the first time.

Sadly, Chantal’s horrific personal toll from the genocide was by no means the exception as the 100 day war that was the fastest killing spree in history saw up to one million people killed in a country the size of Munster across just 100 days.

Chantal travelled with her fellow Rwandan Egwyge Roussard to be guests of aid agency Bóthar, which has its biggest programme currently running in the African nation, as it hosted a special commemoration near its Limerick headquarters to mark the 25th anniversary. The solemn gathering at O’Brien Park saw Mayor of the City and Council of Limerick James Collins, who facilitated the event at the local authority park, plant a birch tree – a symbol of hope and new beginnings – to mark the event.

Speaking after the ceremony, Chantal Mutesi, who now lives in Cork, said she deeply touched by Bóthar and the Irish people’s support for her homeland.  “It means a lot to have this tree planted here in this beautiful park. It means a lot to be able to say that I have a place in Limerick that I can come and say that I was here to mark the 25th anniversary of the genocide.”

Recalling her horrific personal experience of the genocide, she said:  “I was twenty-six when it happened. I was there. I lived through it. I survived it with a baby who was only three weeks old when it started. Memories don’t fade despite people saying time is a healer. It’s not really it just you learn how to cope.

“Memories are still fresh. Seeing the next morning was a bonus. I lost my husband, brothers and my sister. My mom. My grandmother. And my cousins my aunties my best friends and my you know. The whole life was changed overnight.  Commemorating, remembering our loved ones today and the same time acknowledging what’s happening; the courage, the faith and the progress we’ve made, I couldn’t be prouder.”

The two Cork residents also made a special tribute also to Irish public for its response to the humanitarian crisis post genocide and, in particular, signalled out Bóthar for its ongoing work in lifting families out of poverty with donations of cows, goats and other income and food producing gifts.

The commemoration was one of hundreds held across the world on a weekend that marked the 25th anniversary of the Rwandan genocide, which immediately gripped the tiny nation within minutes of an aircraft carrying the country’s president and the president of Burundi being shot down as it flew into Rwanda’s capital city, Kigali. 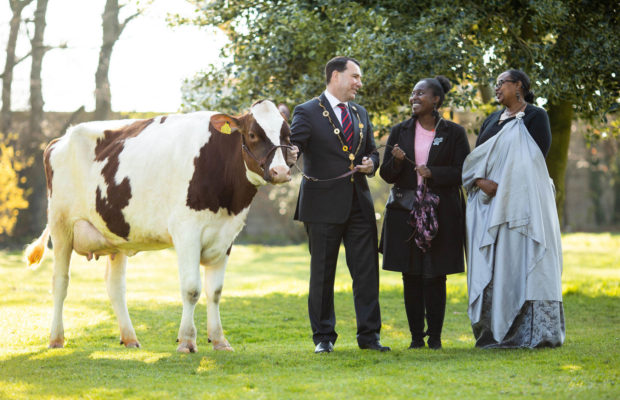 The Mayor of Limerick City and County of Limerick, Cllr James Collins, Rwandans Egwyge Roussard and Chantal Mutesi at the solemn gathering in Limerick for the 25th anniversary of the 1994 Rwandan genocide. Picture: Sean Curtin True Media.

Addressing the event, Limerick Mayor James Collins said it was only right that Ireland would stand in solidarity with the people of Rwanda at this time, to mark the horrific genocide but encourage the continuation of their recovery.  “We can’t ever really know the suffering that your nation has endured. What I do know is the hope that your nation is all about today,” he said.

”Today we are here to mark the darkest period in your country’s history, one that your nation is thankfully putting behind it, in no small part thanks to the response and intervention from the likes of Bóthar, whom we are very proud of in Limerick.”

The aid agency began working in Rwanda 22 years ago and since then has transformed the lives of thousands of impoverished families.  It supports the Rwandan government’s ‘Grinka’ programme of giving each poor family in rural areas a cow – cows are sacred in Rwandan culture – and last year also sourced and sent out five pedigree Irish bulls, purchased by the Rwandan government, to enhance its breeding programme. Irish cows provide six times the yield of the Rwandan equivalent.

Chantal had a special word of thanks for Bóthar, its supporters and the wider Irish public. “Really thank you for everything you have done for us for the families who are now able to send kids to school,” she said.

Her compatriot Egwyge said it means a lot to them on this solemn weekend for Bóthar and Limerick to have the commemoration.  “I left Rwanda when I was five but it’s my home country. And I have family there and I also lost some members of my family.  I’m really glad to see how the Irish and Limerick people are dedicated to remember what happened in Rwanda.”

Niamh Mulqueen, Bóthar Chief Operating Officer said that despite the agencies 20 plus years of work in Rwandan, the stories of survivors still shock to the core.  “When we hear the stories that we’ve heard today it can actually stop in your tracks. It really makes you think how cruel life can be.

“However, I think an important message to take away from today is to show the positivity that is in Rwanda now 25 years later, the hope that they have. The resilience that they have. I think the whole world could learn from them. They’re a fantastic nation and they’re thriving and we are delighted to be working with them and play a role in their Grinka Programme – one cow per poor family.”

Bóthar was established in Limerick in 1991 as an initial one-off gesture of airlifting cows to 20 families in a poverty stricken region of Uganda to mark the city’s ‘Treaty 300’ celebrations.  Since then it has grown into one of Ireland’s leading international NGOs.  Over the past 25 years, the organisation has delivered thousands of animals annually to families in 35 countries across Africa, Asia, South America and Eastern Europe.

While the organisation started out with an airlift of Irish heifers, it broadened its livestock donations in the early years to include Irish goats and pigs.  It now also purchases the water buffalo, camels and bees in project countries.  For further information or to donate  visit

For more information or to donate to the Aid agency Bóthar, click here