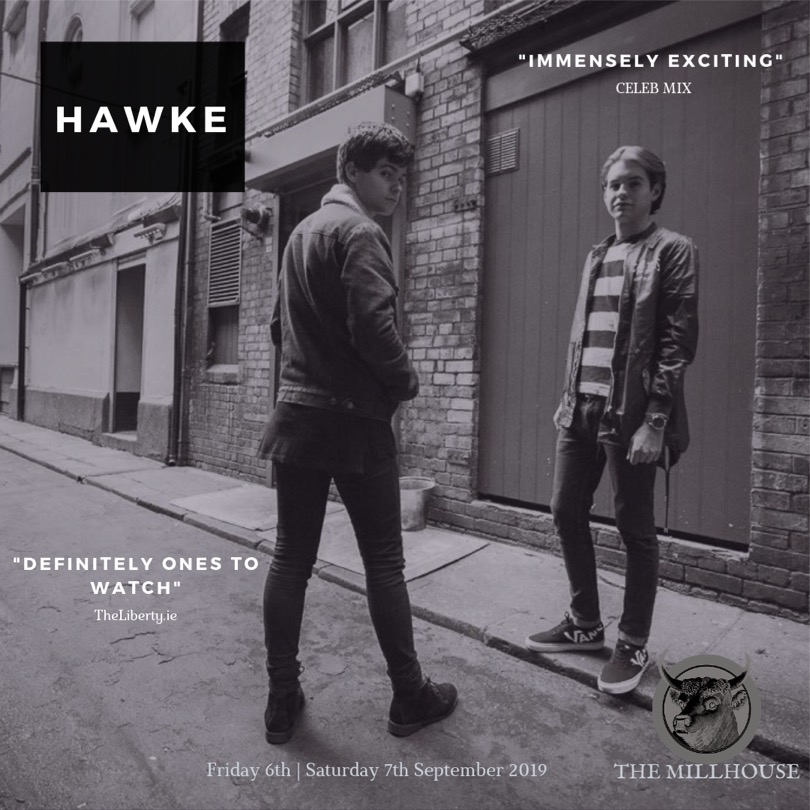 The Millhouse is thrilled to support HAWKE who are pictured above

The Millhouse Bar and Grill, Annacotty is delighted to announce that they will have the Irish Band ‘Hawke’ in residence on Friday, September 6th and Saturday, September 7th, 2019 from 9.30pm onwards. This is to celebrate the Aisling Annacotty AFC & Liverpool Legends weekend making The Millhouse the place to be. We will also have the ‘Champions League Trophy and the ‘FA Cup’ Trophies on display from 7.30pm for the evening. Come along for food, photo op and enjoy our band ‘Hawke’.

Richie & Eoghan are the lead singers of the band Hawke. Hailed as “the next big thing” and “ones to watch” by Irish rock legends Aslan, ‘Hawke’ are a fresh new band formed in March 2019 in Dublin.

The first track from these London sessions “What About Love”, was subsequently chosen out of 500 other artist entries to support Aslan and following in the footsteps of artists such as Gavin James and Damien Dempsey, they opened for Aslan in Dublin’s 6000 capacity Iveagh Gardens on July 13th 2019. Hawke made their debut UK performance at Hit the North festival in Newcastle Upon Tyne in May 2019, alongside Tom Grennan & Jake Bugg. For this young Dublin band, the journey is just beginning.

Nicole McNamara of The Millhouse Bar & Grill commented “we are always looking to support our community and give our locals a good reason to come in and see us, to party and to enjoy themselves. We are going to have a big party to get the weekend going on the Friday night with the boys and it will be amazing to have the trophies here too. It will be the place to be for the after-match party on the Saturday for food and entertainment. We are really looking forward to it.”