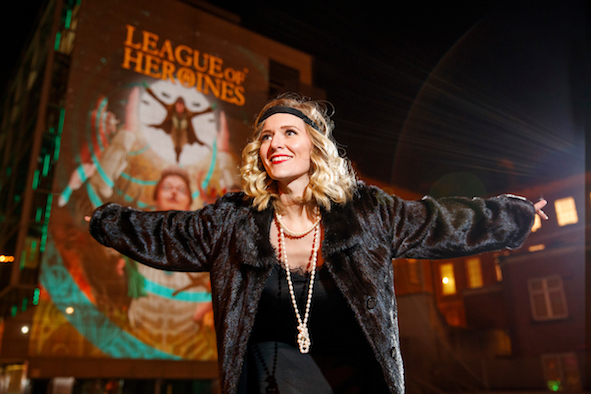 Amy de Bhrun in filming her production ‘I See You’. Picture courtesy of Amy de Bhrun.

Amy de Bhrun is an Irish Actress known for her roles in ‘Vikings’, ‘Jason Bourne’, ‘Casualty’ and ‘The Cured’, is raising €4,000 to finally premiere her self-penned show ‘I SEE YOU’ this May in Dublin.

Since 2011, Amy has been writing and performing one-woman shows internally and to critical acclaim.

But now, and with another female actress on board – she is looking for YOUR help!

I SEE YOU is inspired by the life of Limerick-born aviator and all round trailblazer Lady Mary Heath. A woman who created records that beat both men and women in a time when men were considered ahead.

Lady Mary Heath became one of the best-known women in the world for the better part of the 1920’s, and yet nothing is ever covered on her until now. Now Amy de Bhrun is bringing life to the fantastic Lady Mary Heath through her production ‘I See You’.

Set 100 years after her death, Lady Mary Heath is stuck in the walls of history, desperately trying to communicate with ‘modern day Mary’.

This female-led story explores the idea that if we allow these incredible stories to fade into the walls of history, where will the women of today find their role models? How will we evolve?

Just like the life of Lady Mary Heath, the story is filled with feminism, making the production a feminist must see from the promo alone. Every bit of help that can be raised to create the masterpiece should be used.

Amy de Bhrun is looking for fundraising so as she can fund the payment for cast and crew, including actors, director, producer, stage manager, set designer, lighting designer, sound designer. As well as design/printing of promotional materials (including flyers, posters, and a promotional video). Costume and props, as well as rehearsal space. All of which is necessary to do Lady Mary Heath justice.

Not yet convinced?
Check out her promo video here: