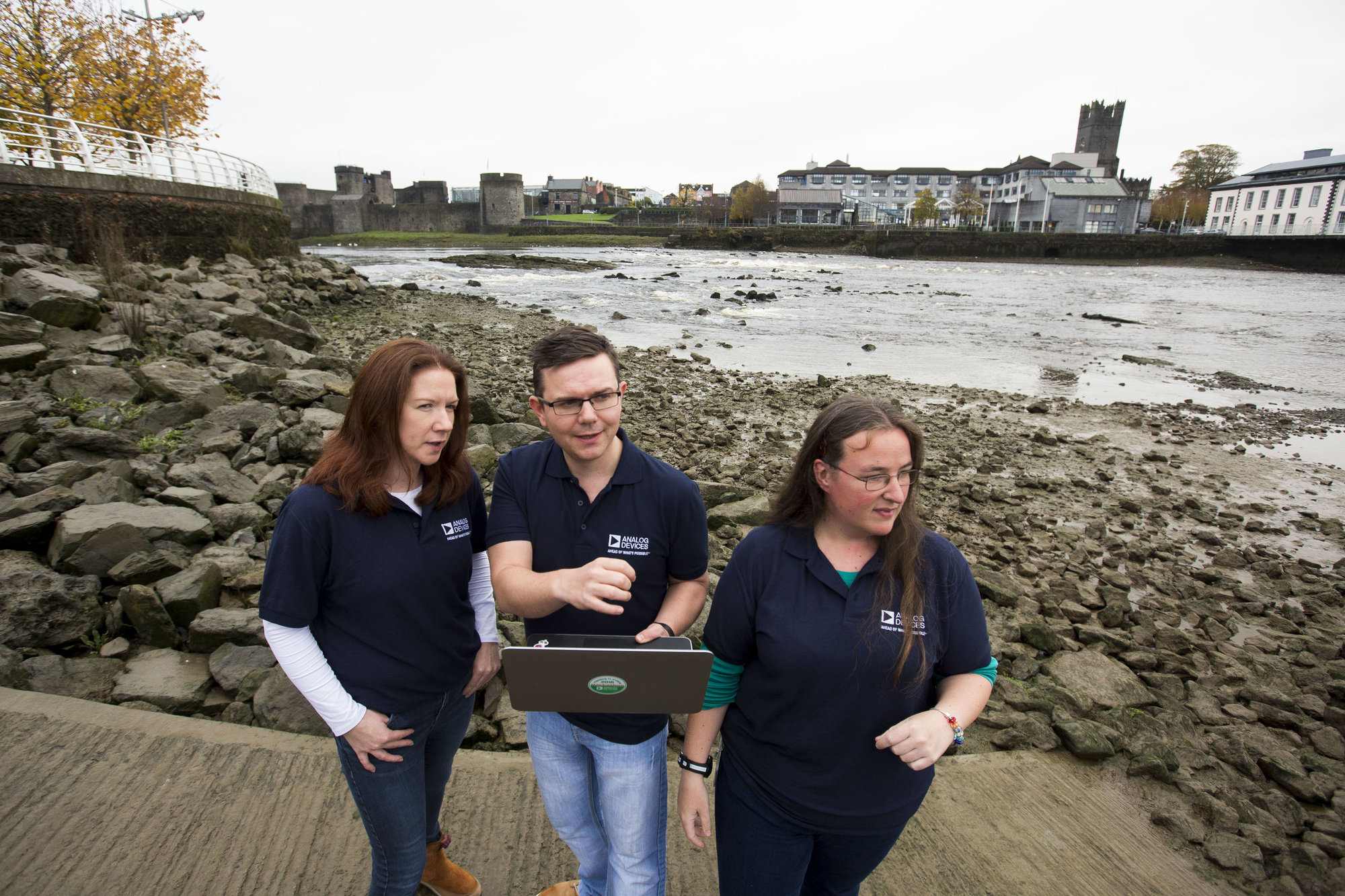 Pictured, from left, is Claire Frawley, Jason O Neill and Margaret Naughton discussing flooding problems on the banks of the river Shannon, Limerick. Photo: Sean Curtin True Media. Analog Hackathon.
Analog Devices International (ADI) is hosting a 2-day Hackathon taking place this November 14-15, to examine how ADI technology could be used to minimize the impact of flooding in Ireland.

The Analog Hackathon is the brainchild of locally-based employees, the theme of ‘flooding in Ireland’ was chosen because of the impact it has had on so many lives in rural and urban Ireland including Analog staff. Analog Hackathon

Taking place in Thomond Park, 60 young people from across Analog have been gathered to develop proposals on how ADI technology could be used to address what has become a recurring national issue.

Colin Lyden, Fellow, Analog Devices, explained the concept behind the Hackathon:  “ADI has a well-established record for engineering innovation but our products have evolved and are now more deployable, with the distance between our technology and problems being solved shortening. This event is about showcasing how ADI technology can be used to address significant issues and how our technology and our people can make a difference.”

Flooding experts from the ESB, JBA Ireland, Garland Concepts and the Tyndall Institute will brief the participants on the issues at play.  Plus, experts from Analog on areas like radar technologies, cloud based services and sensor technologies are also on hand.

“Over the years we’ve all become more than familiar with the devastation that flooding can cause. It has become apparent that flooding defence mechanisms alone are no longer sufficient. An important aspect of this initiative is our interaction with various civic, commercial and community partners in Ireland.  It is through such collaborations that truly informed and intuitive solutions can be realised.  Industry has a part to play in addressing these challenges,” continued Mr Lyden.

Advance warning and prediction systems, flood relief and maintenance of critical systems, identifying coastal threats and emergency defense measures are all expected to be examined over the course of the 2 day event.Ten teams are participating, made up of representatives from a wide variety of functions and skill-sets within ADI.

On Tuesday afternoon, each team will pitch their idea to the judges, Dragon’s Den style. The judges will decide which team wins, based on their assessment of which idea is the best use of ADI technology in alleviating the impact of flooding.

The company will then examine the feasibility of developing the winning concept into a solution for actual deployment by a relevant organisation.

Details of the winning design will be unveiled this Wednesday, November 16.
Innovation, performance, and excellence are the cultural pillars on which Analog Devices has built one of the longest standing, highest growth companies within the technology sector. Acknowledged industry-wide as the world leader in data conversion and signal conditioning technology, Analog Devices serves over 60,000 customers, representing virtually all types of electronic equipment. Analog Devices is headquartered in Norwood, Massachusetts, with design and manufacturing facilities throughout the world. Analog Devices is included in the S&P 500 Index.
Read more about Analog Devices here.
Read more news stories here.

Limerick to parttake in UNESCO Global Network meeting in China