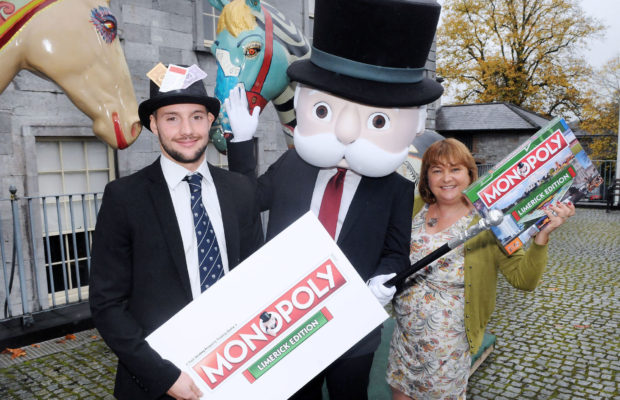 Santa Claus looks set to have a ‘monopoly’ on the new official Limerick version of the world’s most famous board game.

Last month the official Limerick version of MONOPOLY was launched to a huge fanfare at the Hunt Museum. The launch saw the Mayor of the City and County of Limerick Kieran O’Hanlon attending, along with current Limerick Person of the Year, Katie Whelan. Games bosses from Winning Moves UK, who have developed the board under license from MONOPOLY owners Hasbro, also flew in specially for the event from London.

The board features all of Limerick’s most loved sights, including ilovelimerick.com with our own community square.

The board is now proving a massive hit in the shops in the retail run up to Christmas, report the makers of the new board today, Winning Moves UK. The game is about to go on a second print run very soon. “At this rate come Christmas Eve the only boards left around will be the ones on Santa’s sleigh,” predicts Jake Houghton, custom games executive at Winning Moves UK.

The board sees 22 Limerick landmarks land on the multi-coloured MONOPOLY squares made world famous by the likes of Mayfair, Park Lane and Old Kent Road. King John’s Castle, Munster Rugby, The Hunt Museum and The University of Limerick are amongst those that feature on their very own squares.

Mr. Houghton adds “The popularity of the board has taken us way beyond our expectation. We are now about to go on a second print run. The board is proving such a big hit, we think, because Limerick has an enormous pride factor.”

The game is selling all over the world. At the launch of the Limerick Monopoly board, to which the public was invited, many tourists came to watch Mr. Monopoly officially unveil the board.  The game is available at Smyths, Easons, The Range and all good Limerick toy and book stores. It is also widely available online.

For more information on MONOPOLY and other Hasbro games, click here.
To read more on the Limerick Edition of the game, click here.