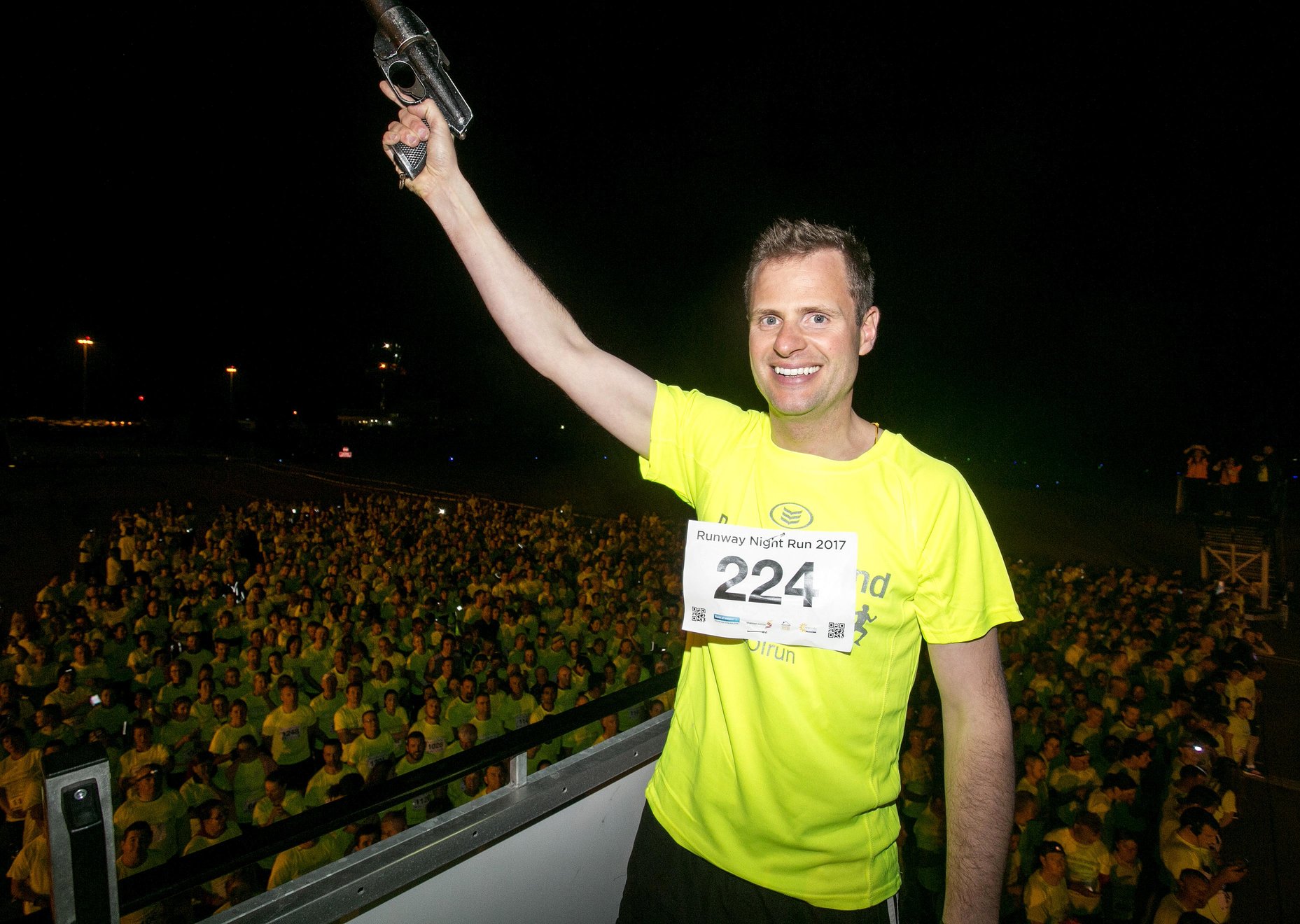 Everest conqueror John Burke took to low-lying land and a much milder challenge at the weekend as he his wife and actor Aoibhín led out almost 2,000 runners and walkers at the Bank of Ireland Night Run at Shannon Airport.

A flat but novelty 5km run at Shannon Airport was a far cry from the steepest 8.8km in the world that he scaled last month, though the popular hotelier finished the event admitting he had more than a challenge from his nearest and dearest.

The Armada Hotel operator was returning to Shannon – the scene of a memorable Everest homecoming for him one month ago – as the airport’s special guest to sound the gun at the start-line for the fourth Bank of Ireland Night Run, in aid of Shannon Group’s designated charities, Cahercalla Community Hospital & Hospice, and Home Share Clare.

Some 27 minutes later, after joining the runners with his wife Aoibhín, he crossed the finish line – but after being pipped at the post by the Dancing With the Stars finalist.

“No excuses, she wouldn’t let me pass.  I tried a few times along the way but Aoibhín doesn’t give in too easily,” he quipped.

“It was great fun. A great buzz from the start and I met people from back home and across the country. I even met a guy from Lithuania who is doing 100 iron men events next year to raise $1m for charity.”

Wife Aoibhín, just three days short of her 30th birthday, was in buoyant mood after clipping her husband’s heels.  “I enjoyed that for sure.  He was trying to sneak past me near the line, but not a hope.

“It was great to get the invite to come here tonight as I’ve heard so much about the event.  I can’t believe it actually took us this long to get to do it. We’ll be here every year from now on.  What else would you be doing at midnight except for a 5km,” she laughed.

The couple had made a mad dash from Doolin for the event, breaking away from the busiest weekend of the year at the famous Wild Atlantic Way village where John’s co-owned Hotel Doolin was hosting the annual Folk Festival.

“It’s a busy weekend alright. It’s absolutely packed in Doolin but I have a long association with this place (Shannon). I’ve always flown from here, I went to college across the way at the Shannon College of Hotel Management and our hotels are very dependent on the airport.  I wouldn’t have missed tonight for the world,” he added.

Speaking after the Bank of Ireland Night Run, Shannon Airport Managing Director Andrew Murphy:  “We held the first ever Runway Run in Ireland in 2014 and four years on it’s become an annual fixture for so many. We had a lot of people here tonight who’ve done all four and they enjoyed tonight every bit as much. We varied the course to cater for the overnight runway resurfacing that is going on but it actually worked a treat, especially for those who’ve done the event before.

“It was great to have John back tonight.  The beard is gone since his homecoming and a few pounds thankfully have come back on and it’s great to see him in good shape and finishing the run with a decent time.  John’s a local hero here.  Not just because he scaled Everest but because he did so in large part to raise awareness about youth mental health. He and Aoibhín are both great friends and supporters of Shannon Airport and we’re very grateful for that.”

You can find out more about John Burke here.