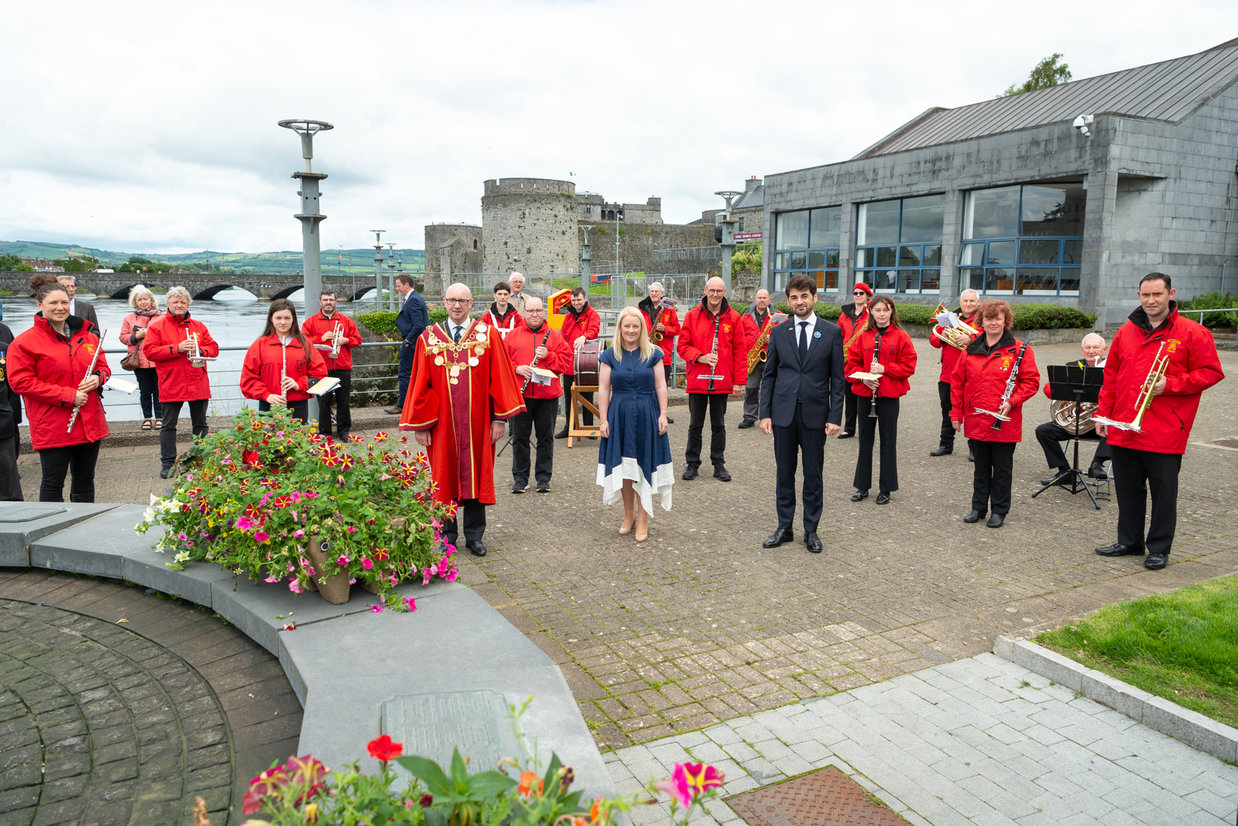 A ceremony was held today in front of the City Hall, on Merchants Quay, next to the Wild Geese fountain to mark what should have been the second edition of the Limerick Bastille Day Wild Geese Festival.

The first edition of Limerick’s new annual Summer festival was held last year, at King John’s Castle, and attracted over 1,000 visitors. It was jointly organised by the Limerick City & County Council and the Consular Agency of France in Limerick. The second edition was scheduled to
take place at King John’s Castle on 12 July as part of the European Expo 2020 but was cancelled due to Covid-19 restrictions.

Back in February of this year, the Consular Agency of France in Limerick teamed up with the Limerick Civic Trust for the organisation of all future editions of Bastille Day Limerick 2020. Following the cancellation of this year’s festivities, they nevertheless decided to hold today’s symbolic
ceremony to mark the occasion.

Members of the Limerick branches of the I.U.N.V.A., the Naval Association of Ireland and the O.N.E. (associations of ex-servicemen and women) attended the ceremony during which officers from the 12th Infantry Battalion of the Defence Forces raised the Irish, French and
European flags.

The Mayor of Limerick, Cllr Michael Collins, gave a speech and laid a wreath to honour the memory of the 10,000+ Irish rebels who bravely fought alongside French troops during the siege of Limerick before being forced to go into exile following the signing of the Treaty of Limerick in 1691.

Most of them ended up settling in France and played an important role in perpetuating the already strong connections between the two countries. Cllr Michael Collins said: ‘Today we are commemorating and celebrating the links between our two great nations. In particular the Wild Geese, all 10,000 soldiers and 4,000 women and children who travelled to France under the command of Patrick Sarsfield, a person indelibly connected with this great county of ours and the impact they had on France once they arrived.

Now more than ever we must work closely together and build on these strong ties and foundations for the benefit of us all’. The commemoration of this crucial historical episode known as the Flight of the Wild Geese and the celebration of the longstanding friendship between France and Ireland are at the core of Limerick’s yearly Bastille Day Wild Geese Festival.

Mr David O’Brien, CEO of the Limerick Civic Trust said ‘We want to thank Tom Toomey, Mick McCarthy, Colm de Barra, and all the other members of the Wild Geese Committee, a sub-group of LCT, who worked tirelessly, linking the Trust with the Consular Agency of France in Limerick, to bring about this event and who will continue to make great plans for next year’s celebrations’.

Dr Loïc Guyon, Honorary Consul of France in Limerick, said: ‘Next year we will be commemorating the 330th anniversary of the Flight of the Wild Geese and, together with the Limerick Civic Trust, we are already planning a weekend-long festival packed with cultural events and entertainment’.

Dr Guyon and Mr O’Brien wish to thank the board of the Limerick Civic Trust and, in particular, it’s very supportive chairman Thomas Wallace O’Donnell and expresses their gratitude to Dr Pat Daly and his LCCC team, headed by Gordon Daly, whose support has been key to making the event happen.

For more information about the Consular Agency of France in Limerick, click here.