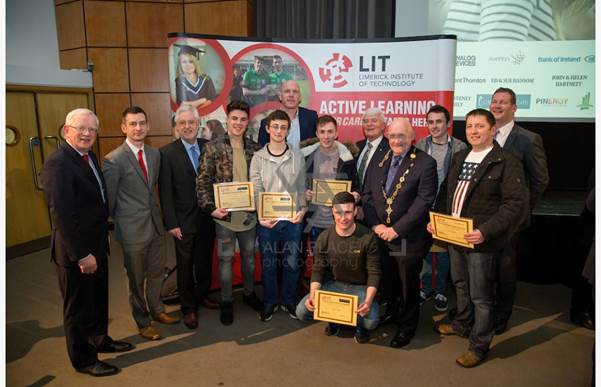 [email protected] – which depends on the generosity of donors – already sustains 54 students in LIT.  All of the scholars in the programme have come from DEIS schools across the mid-west, with six of these successful students having come through Colaiste Mhichíl.  The programme is already valued at €700,000, and is an initiative of the LIT Foundation.  It is hoped that the number of former Sexton Street pupils accessing the programme will increase on foot of the partnership between the school and the institute.

Chairperson of the board of Colaiste Mhichíl, David Croucher, said about the CBS Sexton Street LIT partnership “Colaiste Mhichíl, C.B.S., Sexton Street has a proud and successful record in preparing its students for third level education. As a DEIS school, we recognise the financial hardships involved for many of our students to pursue their further education ambitions. In this regard, we compliment LIT’s initiative in bringing together potential donors to support these ambitions. We are very proud to be able to announce to our students that they will now qualify to apply for student scholarships at LIT through this partnership based on a recognised financial need, and we encourage our past pupils to support this fantastic initiative. While the [email protected] Student Scholarship Programme is separate from the existing JP McManus Scholarships, it should complement the existing scholarship scheme by extending much-needed support to students who are not in receipt of a JP McManus Scholarship.”

Speaking at this year’s awards ceremony in LIT’s Millennium Theatre, President of LIT Professor Vincent Cunnane said, “This is a very special new partnership for us.  LIT has a long and close relationship with Colaiste Mhichíl, and this new initiative will further strengthen these, already deep, relationships.  I have no doubt but that this new partnership will be of benefit to young people, their families and communities.  We may well be funding the leaders of tomorrow through this programme.

“The [email protected] Student Scholarship Programme is the only programme of its kind at this scale that specifically supports students who come from DEIS schools into higher education.

It is a programme we are very proud of and which really reflects LIT’s ethos.  The programme provides them with the funding and mentoring necessary to succeed in college.

Denis O’Connor, Principal of Colaiste Mhichíl, C.B.S., said, “Partnering with LIT on this Student Scholarship Programme will open up opportunities to our students across the full spectrum of  third level programmes offered by LIT. It’s a perfect fit and creates opportunities for all our students who have ambitions and dreams of pursuing further education and who  just need the additional financial assistance to make it happen”.

The new partnership will see past pupils of Colaiste Mhichíl, Sexton Street supporting graduates of their school in their studies at LIT.

The [email protected] Student Scholarship Programme is targeted at students in schools having the Department of Education’s DEIS designation i.e., whose student populations meet particular thresholds indicating social and economic disadvantage or students who have a clear financial need.  It is an initiative of the LIT Foundation, under the guidance of its Advisory Board.

Students currently supported by the programme come from:

For more on the Leaders @ LIT scholarship click here