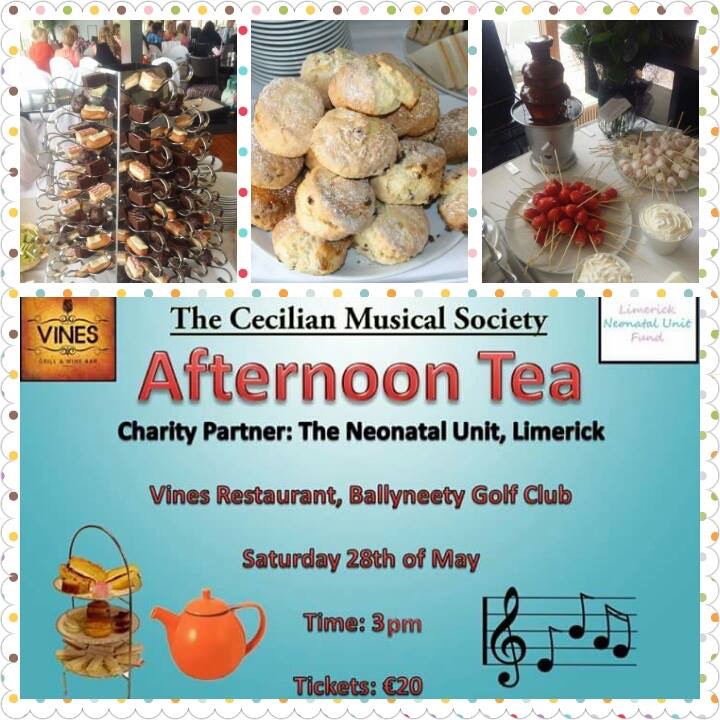 On Saturday 28 of May, The Cecilian Musical Society (CMS) will be hosting their annual ‘Afternoon Tea’ with their charity partner Limerick’s Neonatal Unit fund.  Guests will be treated to the lovely hospitality of the ‘Vines Restaurant & Wine Bar’ in Ballyneety Golf Club, whilst entertained by the very talented Jessica Bray who will be accompanied by their Musical Director Shane Farrell.

The Cecilian Musical Society has been treading the boards since 1919 and is one of the longest running musical societies in Ireland.  The 2016 production ‘All Shook Up’, a juke box musical with Elvis Presley’s music will be running in the Lime Tree Theatre from the 23 -26 of November 2016. The Cecilian Musical Society will commence rehearsals at the end of August, and all new members are welcome to join.

In 1919 the then Rector of the Sacred Heart College, Father Laurence Potter SJ, wished  to raise funds for  the renovation of the church organ and sought advice on how best to  achieve this. Various suggestions were made, ranging from a choral group to a troupe of Christy Minstrels. It was eventually decided to stage a musical, and so the Crescent Operatic Society was formed. The first show selected was A Greek slave which was produced at the Theatre Royal in Cecil Street, and ran to great acclaim. The Society continued to perform for most of the 1920s.

This charity event will run in conjunction with the CMS annual ‘Golf Classic’ fundraiser for their centenary fund. Teams of four are priced at €200, and this includes refreshments during the round, and dinner afterwards. Tee/Green sponsorships are also available from €50. Further information via [email protected].

The event will commence at 3 pm in Ballyneety Golf Club. Tickets for the afternoon are priced at €20 and are available by contacting [email protected].