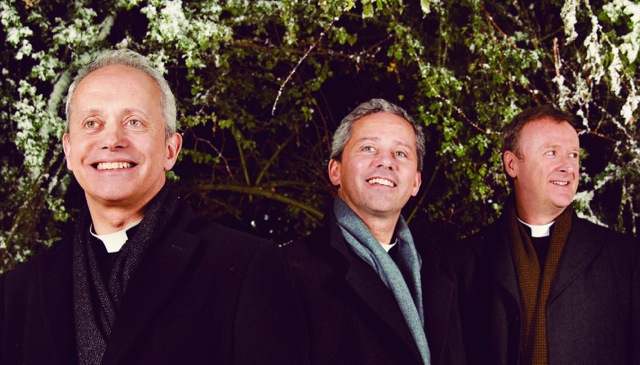 Christmas With The Priests

Frs Eugene, Martin and David are delighted to return to the stage to present Christmas With The Priests singing much loved classics as well as cherished seasonal songs. The Priests are planning a new album for Spring 2016.

Fathers Martin O’Hagan, Eugene O’Hagan, and David Delargy’s debut album sold 3 Million copies, which secured them a place in the Guinness Book Of World Records as the Fastest-Selling Classical debut album ever.

They were nominated for a Classical Brit Award for 3 consecutive years. In September 2010, The Priests shared the stage with Pope Bendict XIV in London’s Hyde Park to an audience of 80,000 while millions watched on TV at home.

They continue to play many concerts each year in Europe and the USA, and manage to balance their performing  with Parish life.

When The Priests released their eponymously-titled album back in 2008, they could have had little inkling of what was about to happen to them. Frankly, who would? The racking up of an awful lot of air miles, three albums released and three million records sold, three Classic Brit nominations, one Guinness World Record, a book, countless TV appearances and playing innumerable concerts around the world to audiences that included the Irish President, the British Royal Family and the Pope, took their breath away. They have graced the pages of Time Magazine, shared a sofa with Jonathan Ross and Alan Titchmarsh.

Of course the Priests remain committed to the cloth, but they nevertheless always look forward to travelling the world and signing for a live audience. “We enjoy singing enormously”, says Fr Eugene, “We realise that commercial projects very often have a shelf life, however, we would very much like to continue doing this forever. I certainly know that Martin, David and I will continue to sing, whatever comes, because it gives us such pleasure to do so. Our fervent hope is that it continues to bring pleasure to everybody else.”  The Priests will surely endure.

Christmas at the Milk Market 2015