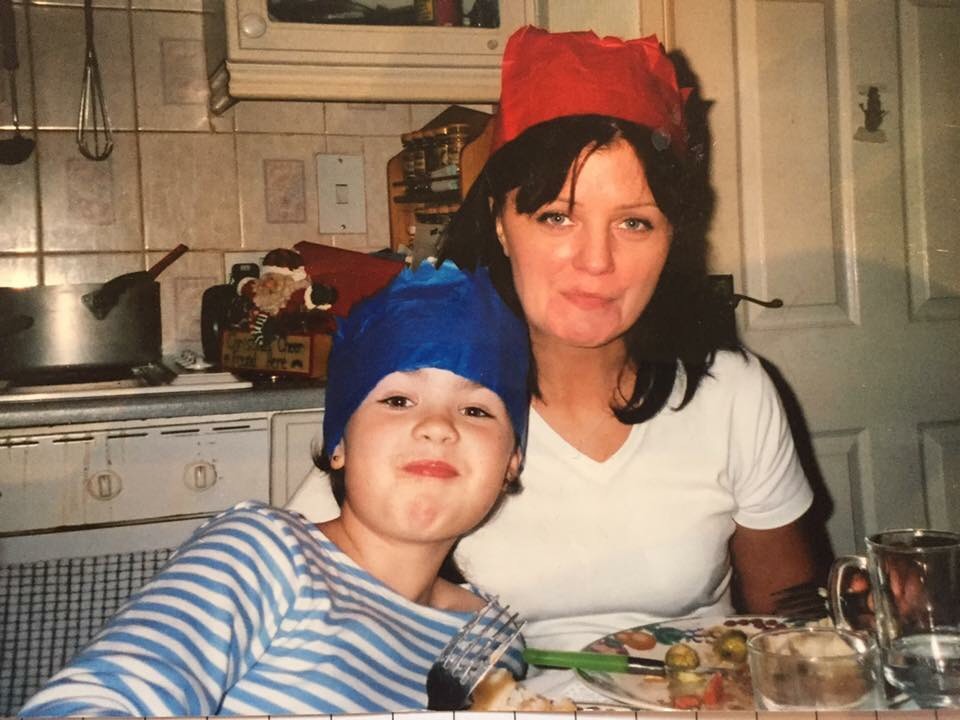 Clodagh Cahill as a child with her late mother Orla Cahill, on Christmas day. Clodagh says this her favourite photo of them together.

Clodagh Cahill becomes an advocate for speaking out about Mental Health

24-year-old Clodagh Cahill, this year’s Miss Bikini Ireland finalist for Limerick, has decided to speak out about her struggles with mental health in honour of this year’s upcoming Mental Health Week. Clodagh lost both her mother, Orla Cahill, and a friend of hers to suicide last month.

One person who believes that the stigmatisation of mental health is more prevalent than ever in today’s’ society is Clodagh.

Clodagh has been living and fighting depression and anxiety for over ten years now and her world took a turn for the worst last month when she lost both her mother and a friend of hers to suicide.

“The balloons were what we released to her requested song she asked me to play at her funeral in a letter she left me. It was Take That – Shine”, Clodagh says.

This week she posted a very raw and what she describes as “out of character” video on Facebook. She addresses her struggle with mental health and she leaves us with the positive message that you are not alone. She claims that even those who you might think to have a perfect life may still be suffering just like you. When you take away the good lighting, editing, and filters that you see on social media platforms such as Instagram, this becomes apparent, Clodagh insists.

The video has since made its way around the internet and has reached and moved thousands of people who can relate to this young woman.

Clodagh, who is originally from Offaly but has made Limerick her home since she first moved here for college, talks about how young people specifically, have to deal with a life saturated with social media and how it may be taking a toll on their mental health.

“My biggest issue was that if you looked at my social media, you would think everything in my life is perfect. People forget that social media is not real life, you only see the highlights of someone’s life and it makes us feel bad about ourselves because we don’t look flawless all the time and we compare our lives to Instagram feeds,” She tells me.

“It doesn’t show the bad things, and that’s because society has made us feel we can’t tell people about the bad things.” She says in her video.

Clodagh Cahill believes this is especially true for the younger generation whose self-esteem keeps getting knocked by unrealistic beauty ideals promoted through social media.

Clodagh Cahill says that entering for Miss Bikini Ireland last year started off as a way to boost her confidence as she also struggled with self-esteem issues coming from foster care. She soon realised that the health benefits of working out were also seriously improving her mental health and mindset.

The theme ‘getting active’ plays an important role in this years’ Mental Health Week and Clodagh says physical activity has personally helped her mentally.

Clodagh’s mothers months mind takes place this Sunday and she tells me: ” I feel that a lot more needs to be done by the HSE to prioritise mental health. My mother and I have both been let down by the health system but I believe that a positive step towards bettering the system is opening up about mental health. I hope that by sharing my story this encourages others to do so too.”

To find out more about Mental Health Week click here

“The photo of me as a child with my mam in the Christmas hats was the last Christmas I had with her since I’d been in foster care and it’s my favourite photo. By some miracle, she came down last year and we tried to recreate the photo that was taken then. So that’s this other Christmas hat photo”, Clodagh said.