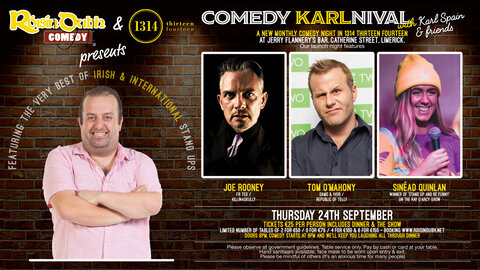 The launch night on Thursday, September 24 will feature Joe Rooney (Fr Ted / Killinaskully), Tom O’Mahony (Damo & Ivor / Republic of Telly) & Sinéad Quinlan (Winner of ‘Stand Up and Be Funny’ on the Ray D’Arcy Show) and is hosted by the “achingly funny” Karl Spain.

This show is hosted by Limerick’s own Karl Spain

Karl (pictured above) has been in stand-up comedy for over twenty years.

Karl has been in stand-up comedy for over twenty years. Last seen on telly hosting Laughter in The Eyre filmed at Galway Comedy Carnival 2019, Karl is probably best known in Ireland for losing a few ounces on Celebrity Operation Transformation, and his TV series Karl Spain wants a Woman in which he not only got huge ratings but he also found himself a woman. As well as being a regular at Kilkenny Cat Laughs, Galway Comedy Carnival, Vodafone Comedy Festival, Edinburgh Fringe Festival and Montreal Just for Laughs. Karl was a resident writer for Republic of Telly and still is for countless other comedians.

A stalwart of the Irish comedy scene, Joe (pictured above) is seriously comically multi-talented.

A stalwart of the Irish comedy scene, Joe is seriously comically multi-talented. He was voted Best Comedian at the Pure M Awards in 2017. His energetic mixture of stand-up and musical comedy has long proved a hit with all ages and nationalities. He has been a headline act in venues all over Ireland and Britain for many years including The Stand (Edinburgh, Glasgow, Newcastle), The Empire (Belfast) and Laughter Lounge (Dublin) and has headlined clubs in China, Kansas City, Dubai, Moscow and Bahrain. He regularly appears with Dublin Comedy Improv at the International Bar and has worked with Stephen Frost Improv All-Stars in Ireland and at last year’s Glastonbury Festival.

Joe is also a successful actor and writer having acted as Father Damo in Father Ted and Timmy in the long-running RTE sitcom Killinaskully, as well as appearing in a host of short and feature films. He starred in the CBBC series Roy, was winner of Ireland’s Celebrity Come Dine with Me, got a five-star review in the theatre version of The Shawshank Redemption along with Omid Djalili, recorded a single “The Rockier Road to Poland” with Shane MacGowan and performed a five-week run in the Gaiety in John B Keane’s The Chastitute. He is most definitely no ordinary Joe.

“Occasionally laconic, at times infectiously manic, and always riveting – coupled with his years of experience have made him one of Ireland’s “10 Most Wanted”, when promoters nationwide pick up their phones” – Hot Press

“The intensity he puts into his singing and character acting is on another level. His act rolls along smoothly and nothing felt forced… great stand-up and excellent storytelling, full of gags” – Chortle

A regular on Irish TV, Tom starred alongside the legendary Rik Mayall in Season 1 of the award-winning TV series Damo & Ivor. He also featured in the hit RTE show Bridget & Eamon as your everyday oddball neighbour Paddy d’Pervert (it’s French!).

Sinéad Quinlan (pictured above) is a 26-year-old toasted cheese sandwich fanatic from Cork.

Sinéad Quinlan is a 26-year-old toasted cheese sandwich fanatic from Cork. She is a rapidly rising comedy star. She is so rapid that she recently won an RTE national stand up competition, ‘Stand Up and Be Funny’ on the Ray D’Arcy Show (RTE1), with only seven gigs under her belt! Her brilliant, surreal descriptions of everyday life will have you in stitches.

Please observe all government guidelines. Table service only, hand sanitisers available throughout the building, face mask to be worn upon entry and exit. We ask that all attendees are mindful of others (it’s an anxious time for many people).

Doors 8:30pm, Comedy starts at 9pm and we’ll keep you laughing all through dinner.

Related Topics:karl spain
Up Next