By Richard Lynch on February 28, 2017@richanthon 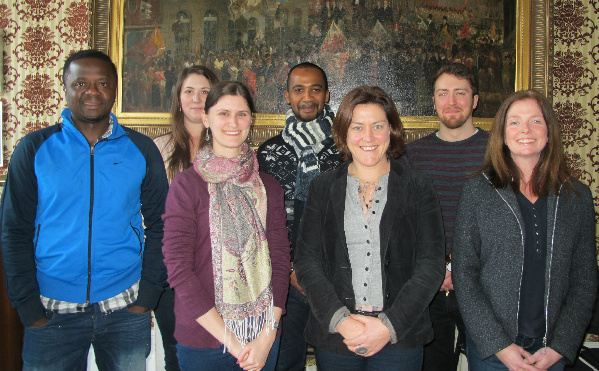 After receiving an unexpectedly high demand for these classes, Hala Jaber, is now offering free Arabic classes in Limerick. the 29 year old who left Syria as the war broke out will begin her free course in the Arabic language on Wednesday, March 1, in Doras Luimni’s offices on O’Connell Street.

Hala, a community musician and PhD student at the Irish World Academy of Music and Dance at the University of Limerick, spoke of her motivation to offer these classes stating “I have had the chance to learn English and French, and now I’d like for people to have the opportunity to learn my language,”

Doras Luimni, a local human rights organisation founded 17 years ago is based in O’Connell street Limerick offers support to all migrants living in the mid-west region. Doras Luimni recently announced their receipt of €234,245 funding from the Department of Justice, through the European Union Asylum, Migration and Integration Fund. Doras Luimni provides one-on-one support and integrating the Limerick population through providing support and advice and according to their recently released 2016 annual report have worked with 1,200 people from 86 countries in the past year.

Radwan spoke about these free Arabic language classes he is offering through the assistance of Doras Luimni stating “The language classes are very basic – the alphabet, phrases, short conversation. But people want to know more about our culture, our history and our language,”

Radwan expressed similar aims and goal as that of Doras Luimni when he spoke about the language classes and how they will help with migrants and the Irish integrating. He also emphasised his positive experience with Doras Luimni stating “Irish people want to build friendships with us. The reception has been very warm here. It’s lovely. Everyone is so helpful. I have never suffered any abuse in Ireland.

Hala also spoke about the positive atmosphere in Limerick and the sense of community that is offered through these classes stating that the demand for these classes “is a positive sign that people want to connect to other people who are coming here, and they’re seeing people as people, not as refugees. We’re just trying to make a connection.”

In addition to teaching Arabic to English speakers, he has also been teaching basic English through Arabic to recently resettled Syrian families in Portlaoise for the past year.

Leonie Kerins, director of Doras Luimni, which was founded 17 years ago, said that this is the first time they have offered the six-week basic Arabic language course in Doras Luimni Limerick. Leonie expressed that Doras Luimni is hoping to continue the programme depending on demand. While spaces for the initial course in Limerick were capped at 12, Doras Luimni are now hoping to offer a third course to meet the unexpected high demand.

Leonie Kerins commented on the overwhelmingly positive reaction to these courses stating “There has been a huge amount of interest, and we are still getting emails enquiring about the course. We’re delighted this has had such a positive reaction.”

Radwan, who is a former client of Doras Luimni is now a member of the organisation’s board. While the free Arabic language classes taught by Radwan are essentially language classes, Radwan and Doras Luimni are focusing particularly on the Irish Syrian connections. Through Radwan’s own experience and by teaching these free classes, Doras Luimni is expanding their work and creating an inclusive and positive integrated environment for the people of Limerick.

For more on migrant integration and support in Limerick click here