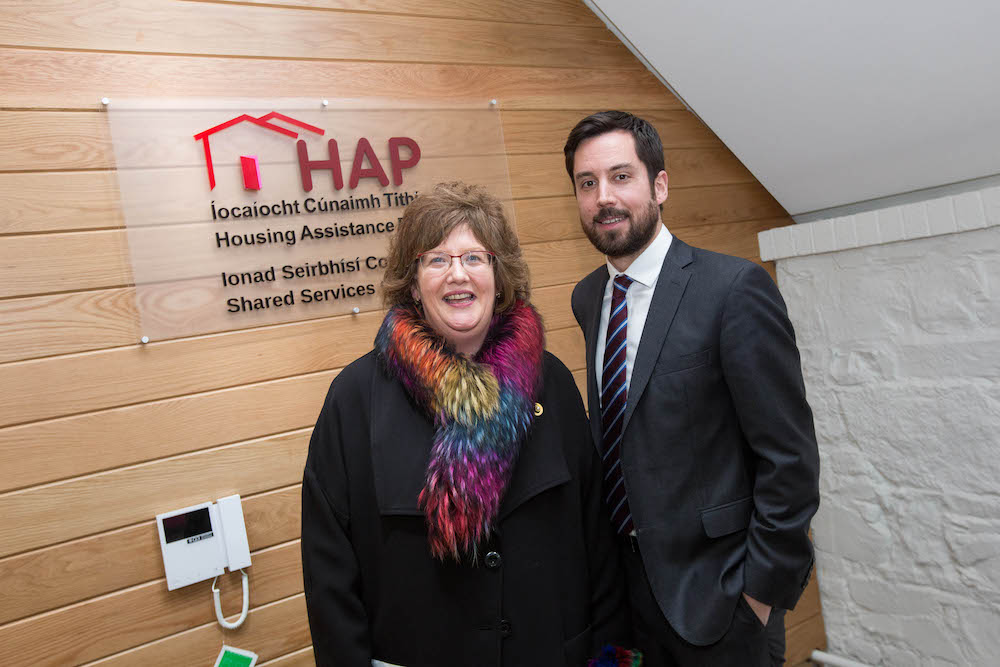 The Housing Assistance Payments Shared Services Centre (HAP SSC) in Limerick will deal with more than €400 million worth of transactions in 2018, its first full year of operation for all local authorities in Ireland.

HAP SSC is run by Limerick City and County Council on behalf of the 31 local authorities across the country along with the Dublin Regional Homeless Executive.

HAP Shared Service Centre is the national customer contact and financial transactional Shared Service for HAP.  Limerick City and County Council operates the HAP SSC on behalf of all 31 local authorities and the Dublin Regional Homeless Executive, following a competitive bidding process in 2016. Prior to that, HAP was run as a pilot project before going national on 01 March 2017.

That figure is expected to rise to around €400 million this year and is on course to reach its target of 84,000 tenancies and a financial turnover of just under €1 billion per annum by 2021.

The Minister for Housing, Planning and Local Government Eoghan Murphy has visited the offices in Limerick to officially open the HAP Shared Service Centre.

Eoghan Prendergast, Director of HAP Shared Services Centre said: “We’re delighted to welcome the Minister to HAP SSC here in The Granary.  The Housing Assistance Payment scheme is one of the key elements of the government’s policy on social housing, and we are proud to be running this national service.”

“We expect to process more than €400 million worth of transactions this year, in what is the largest social housing rent support programme in the Government’s Rebuilding Ireland: Action Plan for Housing and Homelessness.”

“We are constantly growing and hoping to use technology to help us provide an even better service to the public and other stakeholders. We currently employ 55 people but this will rise in line with the continuing growth of HAP.”

The HAP SSC located to The Granary in October 2015, and now occupies two floors of the 230-year-old building.

In 2015, the phase 1 redevelopment was completed; the Design Team was led by Carr Associates Architects, Limerick and the Contractors were O’Connor Maintenance, Limerick. This phase of project won the Fit Out Project of the Year at the Irish Building and Design Awards 2016.

Phase 2 of the Granary redevelopment was completed in 2017. The Design Team was led by MCORM Architects, Dublin, the Project Manager was AECOM, Dublin and the Contractor was Flynn Management & Contractors, Limerick.

The redevelopment has resulted in office space for 100 employees, in the heart of Limerick City Centre.  Currently, the Shared Services Centre employs 55 people.

As part of the continuous drive to achieve efficiencies in the delivery of the HAP scheme, the centre is in the final stages of a Proof of Concept project to identify Robotic Process Automation (RPA). The project is jointly funded by Department of Public Expenditure and Reform is the first of its kind in the local authority sector, and one of the first in the wider public sector.

Robotic Process Automation (RPA) is the application of technology that allows employees in a company to configure computer software or a “robot” to capture and interpret existing applications for processing a transaction, manipulating data, triggering responses and communicating with other digital systems.

By using RPA, The Shared Services Centre will achieve greater financial and operational efficiencies, free up HAP SSC staff to focus on direct/ personal interaction with the various stakeholders, as well as automating repetitive transactions.

From its beginnings as a pilot in 2014 to the end of the period covered by Rebuilding Ireland: Action Plan for Housing and Homelessness in 2021, the HAP SSC is projected to manage over €3.24 billion in financial transaction volume.