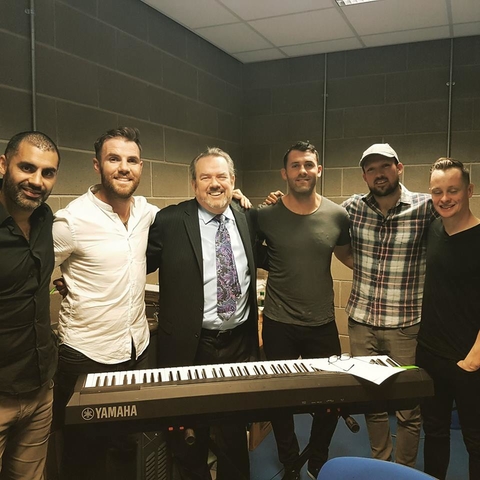 The performance came just a week after the release of the band’s five-track EP entitled ‘Live at The Curragower’ and was no doubt a huge milestone in their career. The gig was part of the Richard Harris International Film Festival, which ran from October 27 to October 31.

The band, consisting of Darragh Graham, Darragh Griffin, Dan Murphy, Barry Murphy and Dermot Sheedy hit the stage at 8pm as supporting act to the legendary songwriter. The band played a stunning ‘stripped-back’ gig for fans. Following the event, they posted a picture on social media saying ‘It’s actually hard to keep track of the amount of hits this man has written. The word “legend” is thrown around all too often sometimes but this man is truly deserving of the title.’

The band is no stranger to sharing the stage with stars, having previously performed alongside the likes of Gavin James, Josh Ritter, Walking On Cars and The Pogues, they can now add music legend Jimmy Webb to the list.

Hermitage Green, who are signed to Sony Music, spontaneously formed in 2010 and have since built a dedicated legion of fans across the globe thanks to their captivating and unforgettable live sets. Their unique arrangement of instruments that includes the bodhrán, djembe, rhythmic guitar and banjo sets them apart as a truly original offering of Irish Music.

The four extraordinary men are set to play Dublin’s Olympia Theatre this Friday, November 4 and will then perform at Warrenpoint’s Skylite Room on Friday November 25. The band’s career will without a doubt continue to go from strength to strength for many years to come, with Limerick supporting them all the way.