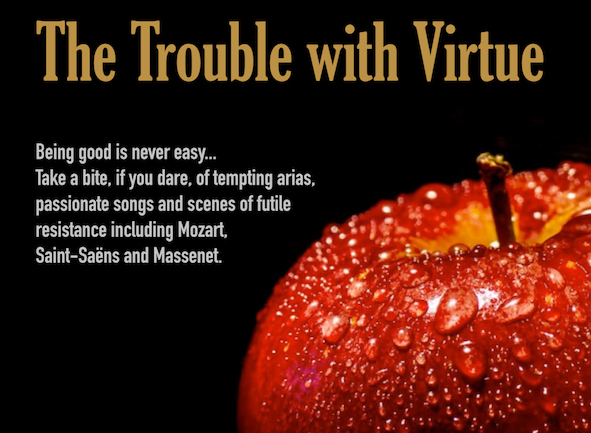 Opera Workshop is a new non-profit opera company based in Limerick. It was set up in 2017 by singer and director Shirley Keane. Their aim is to become the focus for a collective of like-minded artists interested in testing their skills, developing new productions, seeking opportunities to experiment, develop and share innovative ideas in opera performance.

Their first production, The Countess’ Salon, was set in the beautiful Georgian drawing room at No. 1 Pery Square and received overwhelmingly positive feedback from audiences. The concert was such a success, that it quickly sold out. The performers were all either from Limerick or were Limerick based, including Sarah-Ellen Murphy, Kevin Neville, Eve Stafford, Jean Wallace, Catriona Walsh and pianist Eve Stafford.

Following their sold-out performances at The No 1 Pery Square Hotel in December, The Opera Workshop Ensemble are in the Hunt Museum this February and they are Troubled with Virtue. Or rather, troubled by how to hold on to their virtue. They are a rather chaste lot…

They play with and wonder at the battle between virtue and temptation; at the willful denial of passion and the ultimate fall from grace by so many characters from the world of opera. Is it one rule for men and another for women? Why is temptation so, well… tempting? Should they uphold Virtue, ignore it, mock it or value it? Is it all it is cracked up to be?

Shakespeare, O’Brien, Yeats, they all have something to say on the subject.

As do Opera Workshop.

Join them at the Hunt Museum and enjoy scenes and songs from works by Saint-Saëns, Giordano, Lalo, Mozart and many more.

Booking is essential. There are only 40 places per show. Book via email and pay at the door for the Hunt Museum Opera Workshop. To book contact [email protected]