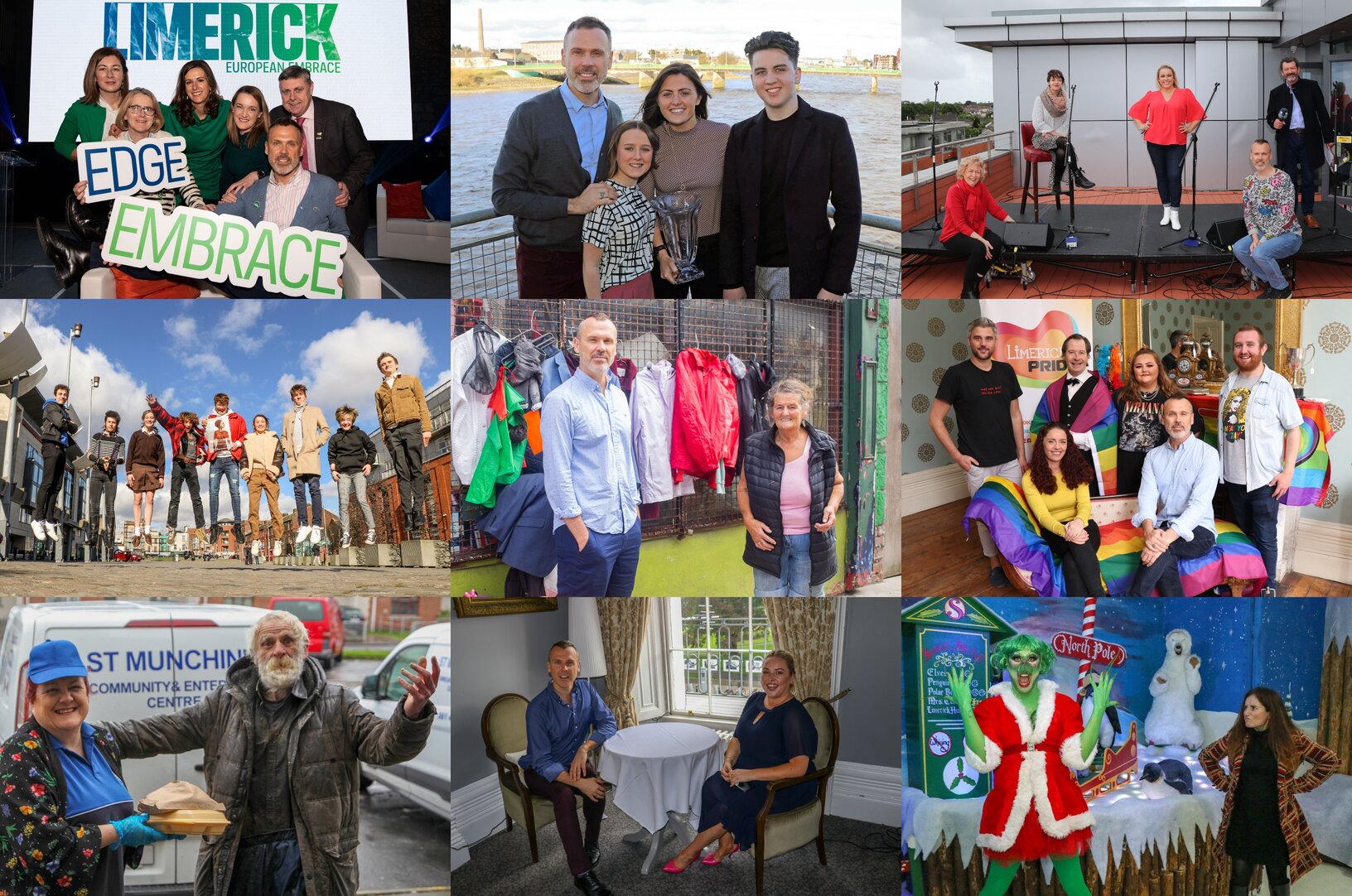 What a tough year! Hoping 2021 is better for all of us and wishing you all the greatest success and happiness for the coming year. Here is a look back at some memorable happy moments from my past year with I Love Limerick:

‘Limerick: Atlantic Edge, European Embrace’ became the first major branding of the city and county to promote it nationally and globally as a destination for inward industry investment, tourism, education and for people to live and work in. Developed by M&C Saatchi, the new brand will internationalise Limerick, placing it on the global market so the world recognises its warmth and resilience. I Love Limerick 2020

To broaden the brand’s reach, a Brand Ambassador structure has been established. Each ambassador represents a different field, including Tourism (Patricia Roberts of No.1 Pery Square), Education (Dr. Sarah Brady of UL), Business (Mary McNamee of the Limerick Chamber), Media (Fergal Deegan of Limerick Leader), Culture (Louise Donlon of the Lime Tree Theatre and myself as Vertical Chair of the Local/Community Group.

I was honoured to be asked to be part of this team and was asked to choose three Community Brand Ambassadors to help me in my task and I am now working with three incredible women – Jayne Foley, Founder of Fresh International Film Festival, Linda Ledger, Manager St Munchin’s Community Centre and community activist  Helen O’Donnell, co-founder of Team Limerick Cleanup. I hope all Limerick gets behind this new branding in the hope of internationalising Limerick and sharing our people with the world.

Use the hashtags #Limerick, #LimerickEdgeEmbrace and #HowLimerick on social media to spread the word.

In February, Róisín Upton, who played a pivotal role in securing a first ever Olympics appearance for the Irish Women’s Hockey team, was named Limerick Person of the Year for 2019 at a gala event in the Clayton Hotel.

Róisín scored one of the goals in the sudden death shootout last November, helping Ireland get to the finals in Tokyo this summer.

Accepting the award, Raheen native Róisín said, “I’m so proud of my roots, to have gotten to where I am, it takes an absolute village. I was lucky to be part of a history making group of women in the World Cup – I’m one of 28 on the Irish team and I’m the only one from Limerick and I carry that flag proudly and the support has just been phenomenal.”

The Award was set up to honour the achievements and success of local people at home and abroad.

A tribute to the exceptional staff at St Camillus

In March, I filmed a tribute to the frontline staff at St Camillus Community Hospital. The incredible frontline staff at the hospital continue to provide essential healthcare assistance to the most vulnerable of patients throughout this COVID-19 crisis, putting themselves at risk for the health and safety of our loved ones.

Further long-term plans are in place to strengthen the facilities of the hospital, as in 2018, the HSE unveiled plans for a new €18.9 million state of the art facility, to cater for 75 long-stay residents, with the aim of completing this development by 2021.

I personally want to thank all the amazing staff at this hospital who provide critical and loving care to so many people’s loved ones at this difficult time during the COVID-19 crisis. You’re doing an amazing job and I applaud all of you. To see a tribute video I made about the hospital go to iIovelimerick.com now.

Ireland’s Young Filmmaker of the Year 2020 announces its winners

Cal O Driscoll, 17, from Dublin took home the title of Ireland’s Young Filmmaker of the Year 2020 for his short film ‘Pirates’, about a pirate station in 1980s Ireland.

2021 will be its twenty-fifth-year encouraging young people from Ireland and overseas, aged 7 to 18 years, to create, exhibit and share films. The Festival provides an opportunity for young filmmakers to see their work on the big screen and to compete for the title of Ireland’s Young Filmmaker of the Year and to win €1000 towards their next film. All submissions are also considered for a range of Specialist Awards.

In June, Limerick came together in song to give a huge thank you to the frontline heroes who continue to fight against Covid-19, while raising much-needed funds for Pieta House. ‘Thank you, Frontline Heroes’ at the Strand Hotel featured moving performances from the phenomenal Limerick talent of Emma Langford, Siobhan O’Brien, Ger O’Donnell, Derek Moloney, Karen Franklin, Jim Lynch and the Munster Supporters Choir.

The event was broadcast live on I Love Limerick’s Facebook page and was watched by 10,000 people within hours of the broadcast.

Una Heaton, event organiser, said, “It was an idea I had that it would be a nice way to use music to thank our frontline people, while also raising money for Pieta House. Music is a great way to alleviate stress and bring people together, and when I asked people to get involved everyone was so enthusiastic, nobody said no, everyone wanted to take part.”

In June, Limerick living legend Ann Curley turned 80 and I was honoured to be able to sit down and interview her about her life.

Ann Curley is nothing short of a Limerick legend in the eyes of those who are familiar with her work. Better known as ‘Curley’, Ann has worked so hard her entire life, from “teaching half of Weston to swim”, and running a club in Weston, to establishing a children’s holiday camp in Ballycotton, Co. Cork, funded by the proceeds of Curley’s Charity Stall at the Limerick Milk Market, and ‘Second-Time Round’, her thrift-shop on Wickham Street.

Ann is a well-known, and much-adored character, whose love of children and dedication to her community is truly honourable.  Congrats to Ann who has also been nominated for Limerick Person of the Year 2020. Watch Richard’s interview with Ann on I Love Limerick’s YouTube channel now!

In July, Limerick Pride 2020 went virtual. The Limerick Pride parade is an annual event that celebrates the LGBTQ+ community in Limerick and all across the world. Last year’s festival ended up becoming Limerick’s largest pride parade ever. To take the place of a physical festival set in Limerick, an online virtual Parade substituted for this year’s celebrations and was a huge success thanks to the hard work of Lisa Daly, Chairperson and Festival Director of Limerick Pride and the other members of our committee.

Lisa said, “It is so hard to connect to family, especially found-family and our LGBT+ community at this time, so we hope that by coming together for the first time in history, all these Prides will bring a sense of belonging to any LGBT+ person and our supporters in Ireland and beyond.”

An interview with Sinead O’Brien of Sinead’s Curvy Style

In September I had the pleasure of doing a sit-down interview with Sinead O’Brien of Sinead’s Curvy Style at the No. 1 Pery Hotel. I Love Limerick 2020

Sinead is not only a social influencer, singer, model, and stylist but also one of my close friends with whom I have shared many laughs with. In this interview, we sat down and had a heart to heart on all things Sinead.

During the interview, Sinead spoke in detail about growing up in Patrickswell with her two older sisters Mary and Lorna. She also recalled the days of her family’s pub O’Brien’s Bar or ‘Dobbs’ as it was affectionately known after her beloved Dad.

Sinead is very family orientated and told me that her biggest love in life and her best friend, is her mother Rose. Despite Sinead’s love of travel, she will always be a home bird because her largest support system, her family, is in Limerick.

We had a brilliant chat together where we spent a long-time discussing Sinead, her life, and her success which can be watched in the video attached!

I was honored to be able to get such an insight into the behind the scenes of Sinead’s Curvy Styles life as well, call her my friend!

In November we visited the Midwest Simon Community Foodbank and a video we filmed during our visit went viral. This started a stream of people and companies coming to donate food to the monthly food bank.

The line for the food bank always seems to go around the block as people line up for the life-changing help the Midwest Simon Community offers to people suffering from food poverty.

The viral video encouraged companies like Kerry Food Group to donate a truck filled with food to Midwest Simon Community. It also encouraged Bus Eireann to do the Fill a Bus initiative which took place on December 3.

Midwest Simon Community is an inspiring charity that continues to help people through food poverty and homelessness.

In December I decided to do a Christmas Grinchmas Giveaway.  I wanted to give something to the people of Limerick to make you all smile and not ask for anything in return.

We gave away 12 brilliant prize bundles to give away — just in time for Christmas. Each giveaway was accompanied by a comedy sketch starring yours truly as Diva Grinch in ’12 Days of Grinchmas’, playing a demented female grinch who was determined to ruin Christmas and relishes terrorising the citizens of Wooooville (my beloved Limerick).

I wrote the script with brilliant improv comedienne Tracy Aspel, my makeup was created by the genius Jammy Makeup, my wigs were made by John Harnett of Bellissimo Limerick, the costumes were created by Teaspach Theatre’s Sharon Kiely and all the sketches were filmed beginning this past September by filmmaking maestro Luke Culhane.

No matter what kind of year it is you can guarantee me and the I Love Limerick crew will always be here to offer you good news and good fun throughout the whole year!

A tribute to 15 years of St Munchin’s Community Centre

This year marks the fifteenth anniversary of St Munchin’s Community Centre, located in Kileely. This state-of-the-art community centre has had an active role in promoting community involvement and development in Limerick since 2005 and has since expanded greatly as a result of the demand for its range of excellent facilities.

I have volunteered my publicity services to the centre for over a decade and have loved every single minute. I am incredibly proud of centre manager Linda Ledger, her team and to everyone who has contributed to the success of the centre. In recent times Linda and her crew have done stellar work with their Meals on Wheels service during the Covid19 pandemic. I Love Limerick 2020

Linda said, “The centre was really set up at the time to try and bring all the services together. It wasn’t the size that it is now. It organically grew and expanded so much because it’s what the people we wanted; we never drove it. Now we have so much, from education with the VEC, care for the older person, as well as hair, beauty, the flower shop, a photography studio, youth clubs, dancing, bingo, older-people clubs, chiropody, Meals on Wheels, sit-down lunches, board rooms for rent, walking clubs – we have a bit of everything.” I Love Limerick 2020

A huge congratulations to Linda and everyone at St Munchin’s for fifteen years of amazing work!