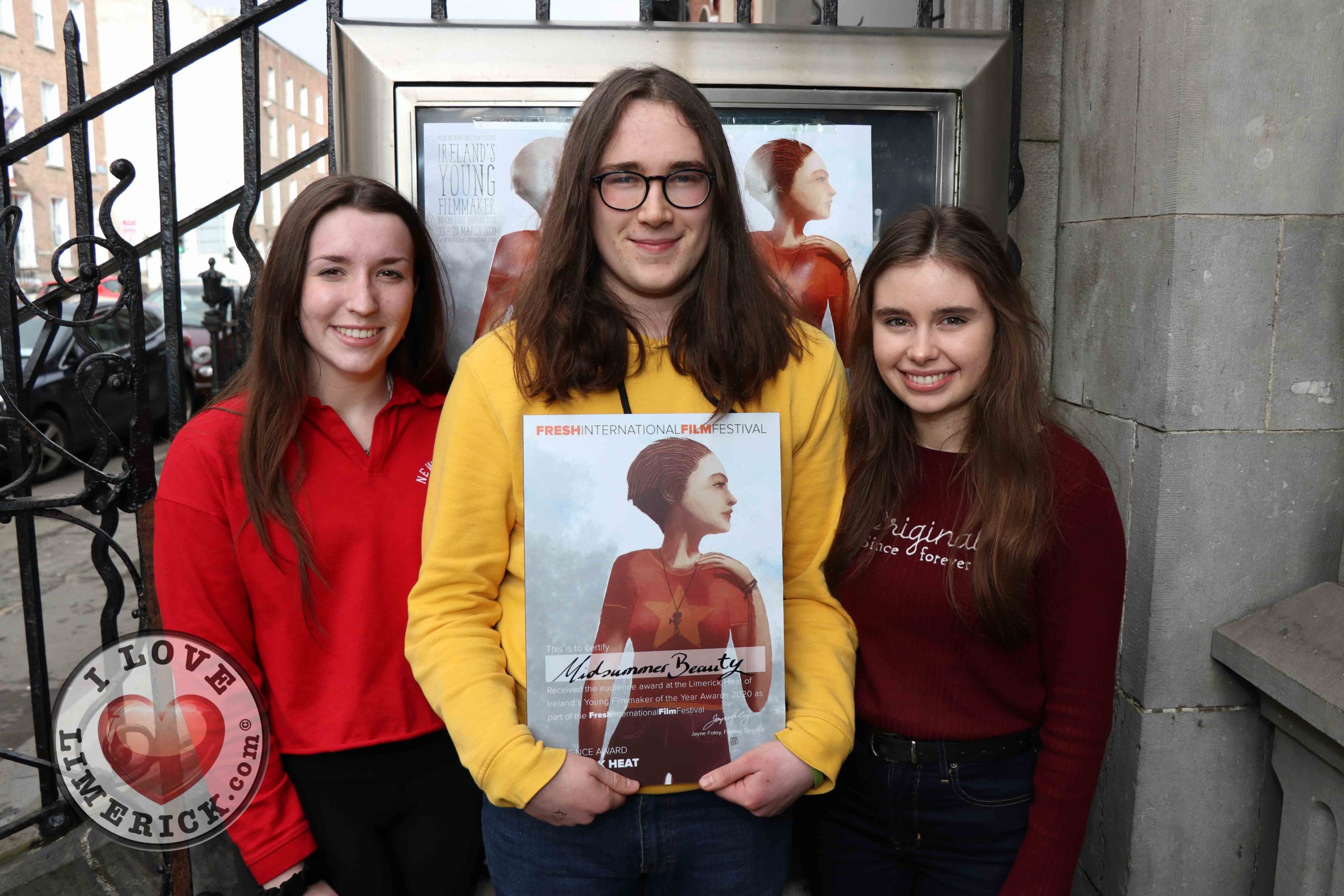 Oisin McKeogh, 18, from Killaloe, won the Audience Award for his film ‘Midsummer Beauty’ pictured at the Belltable with actresses Devlin Staunton, Ballina and Rebecca Jones, Killaloe for the Limerick Munster Heats of Irelands Young Filmmaker of the Year 2020. Picture: Beth Pym/ilovelimerick

Join Sophia DiBattista and Beth Pym as they take a look at this week’s Local Business, Events, Sports, Arts and Entertainment news around Limerick.

Starting off this week is an overview of the Coronavirus and how it has spread throughout Ireland. As a result, all St. Patrick’s Day parades have been canceled.

It comes as the Government endeavors to slow the spread of the coronavirus in Ireland. So far, 24 cases of Covid-19 have been confirmed in the Republic of Ireland with 12 positive cases so far in Northern Ireland.

Instead, there are a few ways to celebrate the holiday from the comfort of your own home such as baking treats with the family.

Next up, we talked about UL’s Drama Society’s next production called Bad Cop Bad Cop, written by Paul O’Driscoll and directed by Ollie Parry. When two detectives arrive on a crime scene and find a dead body with its pants around its ankles, they investigate the crime and interrogate strange characters.

Up next, we discussed Fleadh Cheoil na Mumhan returning to Newcastle West. The county town of Limerick will host the hugely popular, week-long festival from July 13-19 2020.

The Fleadh organizing committee is working very hard to put together a line-up of events that will appeal to both the seasoned Fleadh-goer and cultural enthusiast alike. Events being planned include a gala concert featuring musicians and singers from the tradition-rich region of West Limerick, Céilí, historical town walk, CD launches and much more.

These events are all in addition to the main attraction of the weekend – the Fleadh competitions. Qualifiers from all county Fleadhanna within the province will compete to represent Munster in Mullingar at the All-Ireland Fleadh in August. Follow #TheFleadhGoesWest!

The next story we covered was about the University of Limerick winning Best Student Campus award for the second year in a row.

The University of Limerick has won the award for Best Student Campus in Ireland for the second consecutive year at the 2020 Irish Education Awards, which took place recently in the Ballsbridge Hotel, Dublin.

UL’s International Education Division (IED) also won the award for Best Erasmus Programme for the third successive year at the Education Awards, which recognize, encourage and celebrate excellence among third level education providers across the island of Ireland.

It is the second year in a row that UL’s stunning 367-acre campus has won the award, a recognition of the unrivaled facilities on offer to the more than 16,000 students attending the University.

Next up, 23 Limerick sportspeople, including one Limerick All Ireland winning hurler, were among the 56 international athletes to receive the LIT Sports Scholarship this academic year.

Supported by sponsors PMI, the LIT Sports Scholarship awards are set apart from other sports scholarships as they encourage young athletes to achieve greatness in their chosen sport, while also providing a vast range of off-field supports for their education and mental wellbeing.

Lastly, we talked about the Fresh International Film Festival, as it incorporates Ireland’s Young Filmmaker of the Year Awards. It has received over 1,700 submissions for this year’s festival, the highest number of submissions in the festival’s 24-year history.

The Fresh screening panel has now completed its Limerick run and has decided its winners. They include Shane Joyce, Limerick Youth Dance Company, Luke Culhane and Limerick Educate Together Secondary School.

These will be screened at the Fresh International Film Festival 2020 in Limerick from March 23 to 28 and Ireland’s Young Filmmaker of the Year Awards will be presented on March 25 and 26 during the Festival, at the Odeon, Castletroy, Limerick.