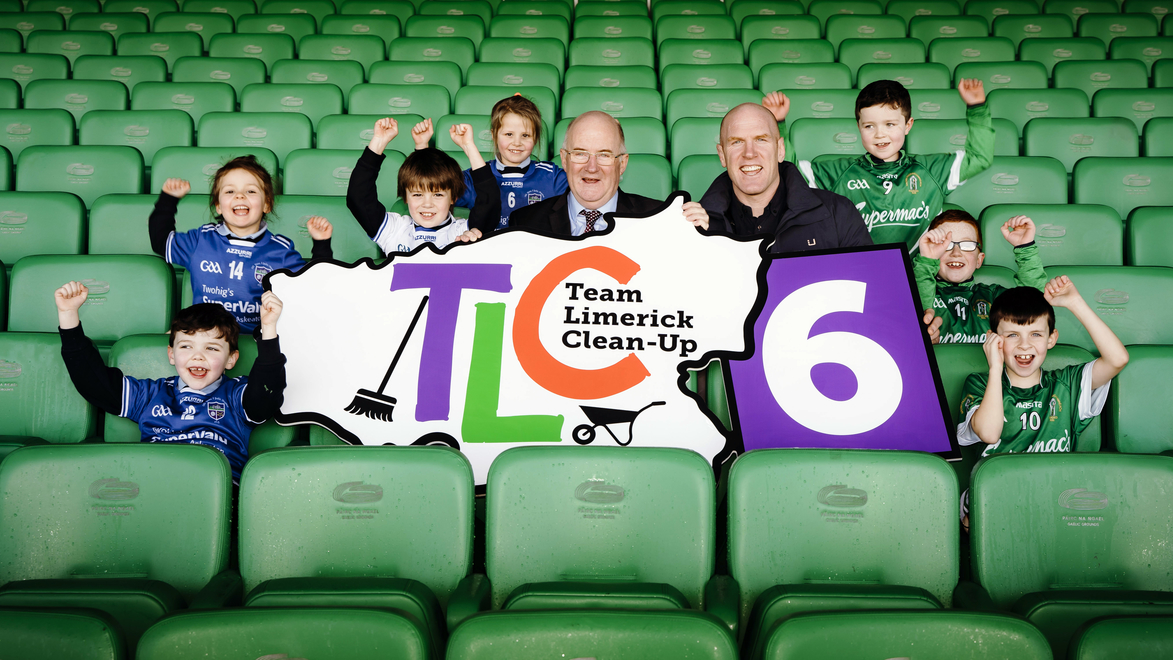 Update: TEAM Limerick Clean-up 6, due to take place on Good Friday has been cancelled, with the hopes to host the event at a later date this year.

Team Limerick Clean-Up will review this position with the intention to host the event later in the year.

They wish to thank all the volunteers for their continued magnificent support and ask you to continue to be mindful of your community. Any queries regarding the deferral can be emailed to [email protected]. 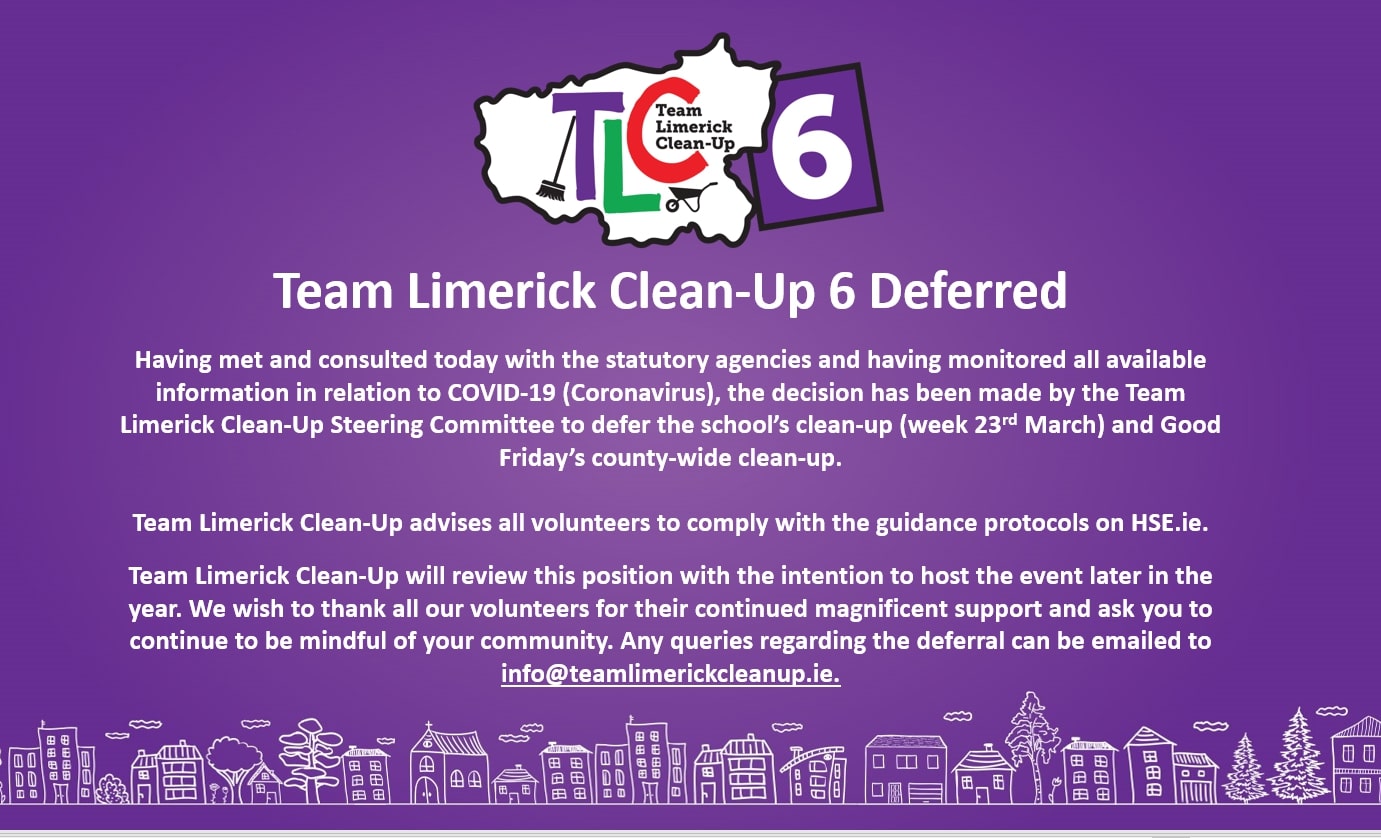 Six of the best for Team Limerick Clean-Up!

Registration is now open for the sixth edition of Team Limerick Clean-Up (TLC6), due to take place on Good Friday, April 10 across Limerick City and County.

Celebrating another great year for the much-loved community event, volunteers are urged to sign up early and join the 20,000+ volunteers expected to once again show their support for their locality.

This year, TLC6 is celebrating how far the event has come since 2015, and the amount of litter that has been collected by the army of volunteers that take part.

Sponsored by the JP McManus Benevolent Fund, the event has seen over 400 tonnes of litter gathered from the streets by volunteers and event partner Mr Binman since inception in 2015.

Last year’s record-breaking participation figures exceeded 20,000 volunteers, with over 600 groups from across the county. 470 of these held tea and coffee gatherings to celebrate. 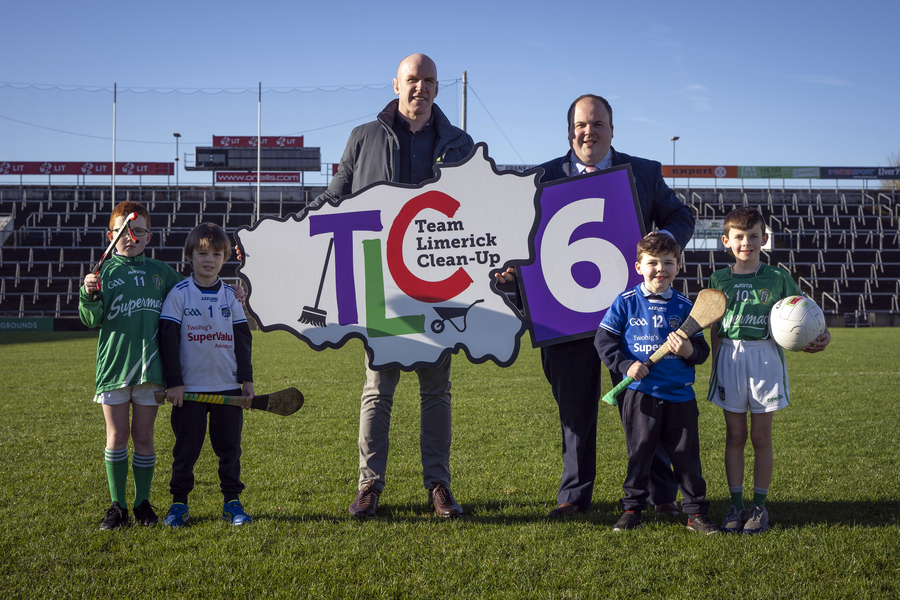 Registration is now open for the sixth edition of Team Limerick Clean-Up (TLC), due to take place on Good Friday, 10th April, across Limerick City and County. Volunteers are urged to sign up early and join the 20,000+ volunteers expected to once again show their support for their locality. Pic: Don Moloney

In addition to encouraging volunteer participation in the clean-up, TLC6 is encouraging sports fans attending matches throughout the city and county to keep their stadia tidy and pick up any litter they come across.

The Gaelic Grounds and Thomond Park are perfect examples of venues where thousands of people congregate and where litter can get dropped.

Commenting on Team Limerick Clean-Up 6, GAA President John Horan said; “Team limerick Clean-Up has been going from strength to strength over the last six years. It is a wonderful community event that brings groups from every walk of life together for one cause.

I am honoured to be here today to launch this year’s edition of TLC. I would encourage everyone to sign up this year, get involved and continue the good work!”

JP McManus, Team Limerick Clean-Up Sponsor reflected on the last five years; “It is very evident how much pride our passionate Limerick people have for their county and the environment.

Team Limerick Clean-Up has come a long way since the early days and is now very much in the minds of volunteers year-round.”

Indeed, TLC’s year-round initiatives feature a strong focus on sustainability. Hundreds of specially-designed, Paul O’Connell-signed reusable coffee cups have already been distributed and more will be offered on TLC’s social media channels later in the year, along with further sustainability enterprises.

Team Limerick Clean-Up is an initiative sponsored by the JP McManus Benevolent Fund and supported by Limerick City and County Council. Endorsed by Paul O’Connell, the official partners include Mr Binman, The Limerick Leader, the Limerick Post and Limerick’s Live95.