Imelda May Live at the Big Top

Chart topping Imelda May will conclude a phenomenal 2011 with a very special performance Live At The Big Top, Limerick. 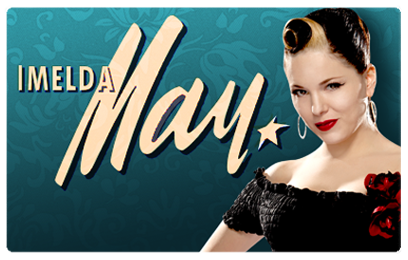 With her unique fusion of rockabilly, blues and jazz, Imelda has made a huge impact on the international live scene. Her shows have a reputation for being impassioned, all-or-nothing events. Fans can expect to be wowed by her seductive vocals and feisty burlesque chic at this very special show on 23 December 2011 here in Limerick.

Imelda has just released More Mayhem, a special edition version of the album which has sold over 200,000 copies worldwide. The special edition includes three new tracks – “Roadrunner”, “Gypsy” and “Blues A Calling”, plus Imelda’s previously unreleased cover of Patsy Cline’s “Walking After Midnight”.

“Imelda is a top-class performer who has a great fan base here in Limerick and the surrounding areas. With the date being the day before Christmas Eve it promises to be a magical evening for her many fans. This show is the third in an upcoming series of Big Top gigs which also includes The Coronas on November 25th and Bell X1 on December 2nd. Word about the suitability and originality of the venue is getting around and we hope to welcome the cream of international talent in all genres to Limerick over the coming 12 months.”

Tickets for Imelda May go on sale from Dolans Website on Friday October 21st at 9am. Tickets for The Coronas and Bell X1 are on sale now!