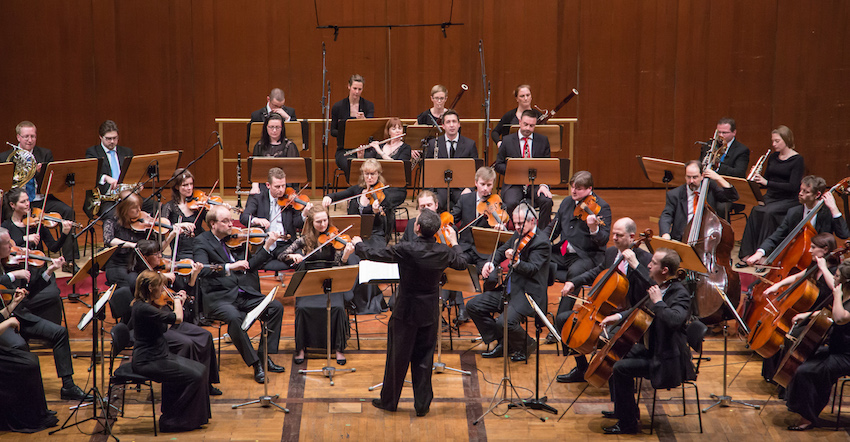 The Irish Chamber Orchestra Spring Season 2018 at home and abroad

The Irish Chamber Orchestra Spring Season 2018 at home and abroad – Limerick audiences have a chance to preview the ICO’s programme for Heidelberg, marking the third year of the ICO’s residency, at the prestigious Heidelberger Frühling Festival.

The Irish Chamber Orchestra Spring Season 2018 at home and abroad

A richly diverse programme features Mozart’s joyful Eine Kleine Nachtmusik, one of his most popular and best-loved works.  Strauss paid homage to his beloved Mozart with his highly refined Duet Concertino.

Widmann brings his own twist to the Andante from Mendelssohn’s Clarinet & Piano Sonata, which he has arranged for Clarinet, String Orchestra, Harp and Celesta. Mendelssohn’s sparkling String Symphony No. 10 is coupled with Prokofiev’s extraordinary Quintet in G minor, full of the jazzy themes of the 20‘s, inspired by his forgotten circus ballet Trapèze.  Acrobatic aerial dance specialists, Fidget Feet enhance this unique and spectacularly atmospheric performance.

The orchestra will join Kormac’s Big Band and an array of guest musicians/artists including ArtSoul singer-songwriter Loah and famed composer and conductor Eimear Noone performing a new collection of songs. St. Patrick’s Festival is funded by Fáilte Ireland, Dublin City Council and the Department of Culture, Heritage and the Gaeltacht.

Limerick audiences have a chance to preview the ICO’s programme for Heidelberg, marking the third year of the ICO’s residency, at the prestigious Heidelberger Frühling Festival.  Jörg Widmann introduces world-renowned Russian pianist, Elisabeth Leonskaja, whose every move bespeaks her vast experience.

She performs Mozart’s Piano Concerto No. 23 – a work full of mercurial wit and humour and joins the ICO for Widmann’s Fever Fantasy, inspired by Schumann.  Widmann performs Weber’s pioneering Concertino for Clarinet and Orchestra, which gave the clarinet a new measure of prominence.  Mendelssohn’s prodigious Sinfoniesatz in C minor is the last of his 13 sparkling string symphonies.

Finally, Schumann’s magnificent 2nd Symphony engulfs the listener with musical images of delightful originality and beauty.  Don’t miss this one-off performance in Limerick on Thursday 22 March ahead of the ICO’s performance at the Stadhalle, Heidelberg on Tuesday 27 March.  In between, the ICO performs again with Widmann at the Philharmonie in Essen, Germany with pianist, Oliver Triendl on Sunday 25 March.  The programme features works by Weber, Widmann, Mendelssohn.

In April, the Irish Chamber Orchestra Spring Season 2018 continues as the ICO joins forces with the newly formed Irish National Opera, and a dream-team ensemble cast, to present The Marriage of Figaro by Mozart, conducted by Peter Whelan.

The critically acclaimed New Zealand bass Jonathan Lemalu, sings the title role.  This comic tale of mayhem and mischief boasts some of the most beautiful and familiar music ever written including the famous overture.   Theatre guru Patrick Mason directs Figaro in Wexford on Friday 13 April and Dublin from the 17-21 April.

In May, the Irish Chamber Orchestra Spring Season 2018 continues back on the road with a regional tour visiting venues in Limerick, Kilkee, Co. Clare, Newport, Co. Mayo and Monaghan directed by Katherine Hunka from the violin.  Vivaldi’s inflammable brilliance first ignited with L’estro armonico or The Genius of Harmony, a set of twelve concertos and, one of the most influential of its day.

No. 1 oozes creativity and imagination performed by ICO soloists.  Bach’s virtuosic Concerto for 2 Violins in D minor is one of his best-loved works and will be performed by ICO’s Katherine Hunka and Nicola Sweeney.

Schubert’s Death and the Maiden, one of his finest works, makes for thought-provoking, refreshing listening combined with the sheer energy of the ICO’s music-making.  Malachy Robinson’s cinematic new work (commissioned for this tour) invokes music both old and new, and green men both woodland and alien!

The Irish Chamber Orchestra is resident at the Irish World Academy of Music and Dance at the University of Limerick and is funded by The Arts Council of Ireland/An Chomhairle Ealaíon.  International touring is generously supported by Culture Ireland.