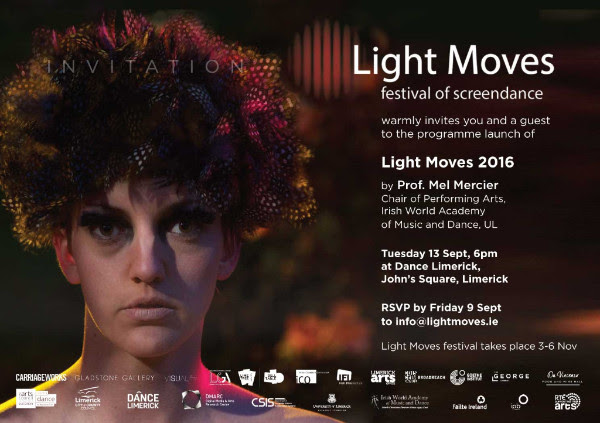 Light Moves 2016, Ireland’s festival of dance on film, is back for its third year, with a programme that showcases beautiful, thought-provoking and cutting-edge new work in Limerick venues November 3-6.

The festival is an opportunity for audiences both local and international to watch, learn, film, compose, dance, discuss and participate. The programme will include Irish and world premieres, performances, installations, workshops, labs and talks from leading artists and thinkers from across the world. The festival includes a special focus on work from Ireland, a participatory project for older people and screenings for audiences aged 4+.

Details were announced at the programme launch at Dance Limerick by festival curators Mary Wycherley and Jürgen Simpson, who were joined by special guest Professor Mel Mercier, Chair of Performing Arts at the Irish World Academy of Music and Dance, to officially launch the programme.

Mary Wycherley and Jürgen Simpson said: “We invite you to delve into the rich diversity, boldness and vibrancy of screen dance; film experienced through the lens of movement and choreography.”

Burrows and Fargion will be showing a selection of their 52 Portraits- a year-long online project with Hugo Glendinning, in which a new short filmed portrait of a different dancer is released every Monday through 2016. The project is produced by Sadler’s Wells Theatre London and has had a total audience so far of 23,500 across 100 countries.  Burrows and Fargion will also give a live performance of their Venice Biennale commission Body Not Fit For Purpose.

Programmers for Light Moves 2016 are delighted to be showing two films by Tacita Dean, Featured Artist at this year’s festival.  Dean, OBE, is one of the most influential artists of her generation. She has been shortlisted for the Turner Prize and her current work includes her film Portraits with David Hockney.

With three feature-length screenings at the Belltable, the festival is inviting audiences to experience the choreography inherent in three extraordinary award-winning films through the lens of screen dance: Terrence Malick’s To The Wonder (starring Ben Affleck), Milky Way from Benedek Fliegauf and Michelangelo Frammartino’s Le Quattro Volte.

Light Moves 2016 is also delighted to be presenting a selection of the best new short films for children from around the world. With stories about cool cats, singing chicks, talking mushrooms and bright ideas, there’s something for everyone in this collection of short animated and live-action films. The programme, entitled Short Tales, is presented in association with IFI Family Festival 2016.

For older people, there will be a Dance And Filmmaking Workshop For People Aged 50+ with choreographer Philippa Donnellan, Director of CoisCéim BROADREACH, the access participation strand of CoisCéim Dance Theatre, and filmmaker Mary Wycherley, curator of Light Moves and Dance Artist-in-Residence in Limerick. Taking place 21st October, this workshop will give participants the opportunity to direct and perform in their own dance films.

At the end of the festival, the Light Moves 2016 Festival Awards will be presented for works submitted via the Open Call that demonstrate particular artistic excellence in their exploration of screen dance.

Light Moves 2016 is produced by Dance Limerick in partnership with DMARC (Digital Media and Arts Research Centre) at the University of Limerick.

Light Moves Festival Passes and Tickets are available from: www.lightmoves.ie  or
Dance Limerick, 1-2 John’s Square, Limerick (cash/cheque only)
Tickets to feature films and family film are available from the Belltable, 60 O’Connell St (061) 774774 / www.limetreetheatre.ie

For more news on Dance Limerick from I Love Limerick click here.