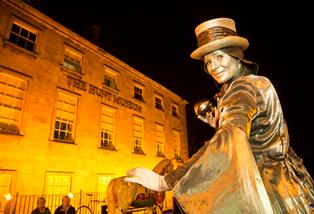 Public have their say on Limerick Culture and Creativity Strategy

Limerick Culture and Creativity Strategy aims to create multicultural a Limerick, where culture and creativity are part of everyday life.

The draft strategy was mostly well received, with a few minor concerns

Limerick natives have had their say on the Limerick Culture and Creativity Strategy, which has been renewed from 2023-2027. The draft of the five-year strategy was published online by Limerick City and County Council (LCCC) on October 12. LCCC said the strategy builds on the legacy, growth and reimagining Limerick as a creative place.

In the draft, LCCC described the Arts and cultural activity as having an integral role in the ambitious reimagining of Limerick. LCCC outlined the importance of continuing to integrate arts and culture into healthcare settings, workplace settings, and social services across Limerick.

The Council held a meeting online on Wednesday, October 19 where the public got to voice their ideas, opinions, and any worries about the next five years of the Creative Ireland strategy. Feedback was also invited to be given through an online survey set up by the Council.

Overall, the Limerick Culture and Creativity draft strategy was accepted and mostly well-received by the public at the meeting on October 19. However, people voiced their concerns on the lack of affordable spaces across Limerick city to practice arts, and concerns were also raised about the difficulties surrounding making a sustainable living as an artist, with calls for more funding to be given to Limerick artists and musicians.

LCCC stated, “Our vision for Limerick in 2027 is a city and county which is creative, integrated, confident, and excited about the future. We envision a multicultural Limerick, where culture and creativity is part of everyday life.”

The five-year Limerick Culture and Creativity Strategy strategy is part of the all-of-government Creative Ireland programme. Creative Ireland aims to connect people, creativity and well-being. Creative Ireland is “committed to the vision that every person in Ireland should have the opportunity to realise their full creative potential.”

The programme in Limerick aims to promote interest and leadership in grassroots community cultural development on the part of Limerick’s cultural sector. The strategy also aims to provide meaningful opportunities for citizens and local communities, together with Local Authorities, to nurture, sustain and facilitate participation in cultural and creative activities.

All feedback has been submitted and will be accounted for before Creative Ireland release a final publication of the Culture and Creativity Strategy.