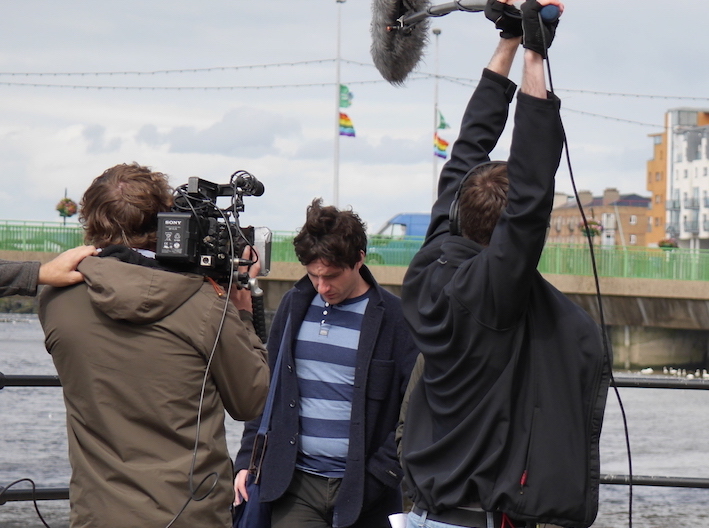 Limerick Film Trilogy is now available online for people to watch after successful screenings on RTÉ and national and international film festivals.

2019 marks the 5th anniversary of Limerick City of Culture. The Limerick Film Trilogy is now available online for people to watch after successful screenings on RTÉ and national and international film festivals. The Limerick Film Trilogy consists of three short films that were made with the support of Limerick City of Culture in partnership with Behind the Scenes. The scheme also received assistance from Screen Training Ireland.

This ambitious project was realised by Film Limerick Project Manager Ronan Cassidy and acclaimed Limerick writer and director Gerard Stembridge. The idea behind the project was a way of providing training and experience for those seeking to break into the film industry. Three short films were produced using local filmmakers mentored by industry professionals. Gerard Stembridge selected three writers and worked with these writers individually to make each script as good as it could be. He also took an overview, looking for connecting features and elements that would create links between the stories.

The Limerick Film Trilogy consists of three short films – Day Off (drama), The Apparel (comedy) and Date: Time (romantic comedy) – that were made with the support of Limerick City of Culture in partnership with Behind the Scenes.

The writers were given maximum freedom to tell whatever story they wanted to tell. The stories had to be contemporary and preferably unfold within a limited time period and Limerick City itself was to be evident as the backdrop. The use of locations in the city is therefore at the heart of each of the films. Even though the films are quite separate stories and work as stand-alone films, seen together they are subtlety linked.

Pictured is Gerry Stembridge who mentored the filmmakers through the process.

Gerard Stembridge worked with the directors on casting to secure the best available local talent for the individual films. He also supervised the filming and mentored the directors on set and ensured that the important linking elements between the stories were taken care of so that the final product would stand up as a single entity.

Director of Photography Patrick Jordan (Volkswagen Joe, The Young Offenders) oversaw the camera crew. Post production was managed by Simon McGuire in Limerick Institute of Technology, where opportunities were given to trainee editors.

Starring Dawn Bradfield (The Clinic) and Joe Mullins (Pilgrim Hill). Laura struggles at first to come to terms with her husband’s life-changing affliction, early-onset dementia. Her only distraction is her Day Off, where once a week she finds time to see her friends and socialise.

Featuring Andrew Bennett (Angela’s Ashes) and Aidan Crowe (Game of Thrones). Joseph is a forty-something whose life seems to be unravelling just a little. Moved into emergency accommodation with an unkempt twenty-something, he clings to the last vestiges of the life he knew before – his job as curator of an art gallery.

Main characters played by local actors Mark Griffin and Erica Murray. A romance develops between Ann and Bob, but his bad habit of being continuously late is taking the excitement away and she feels taken for granted.