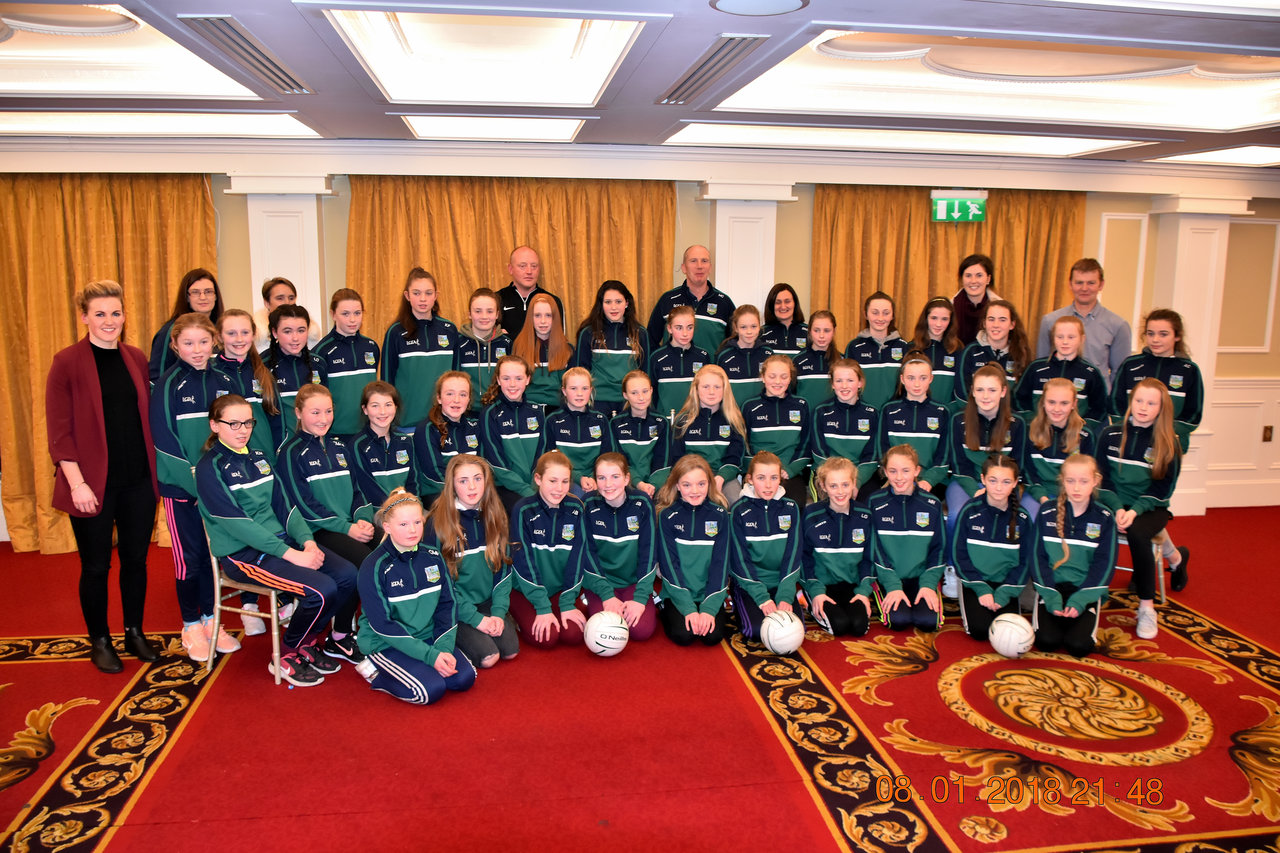 The Limerick Ladies Gaelic Football (Limerick LGFA) 2018 underage season kicked off with a bang on Monday night with the launch of their underage county Gaelic Football programme at the Fitzgerald Woodlands Hotel in Adare. Over 80 girls accompanied by parents, families and friends joined the new Limerick Ladies Football management teams as they unveiled plans for the new season ahead.

Fiona and Lorraine spoke to the new underage players about their Gaelic Footballing journey, from underage development right up to today where they retain invaluable senior roles with their respective clubs and counties.  The new Limerick girls were left ‘in awe’ of Fiona and Lorraine, as the experienced players outlined their successes and failures along their Gaelic Football journey, overcoming lots of individual and team disappointments along the way.

Carnacon and Mayo All Star, Fiona McHale spoke of her memories being called up to the Mayo squad and how excited she was to be part of something special. As a player with her native Mayo club Carnacon, Fiona highlighted the distractions along the way (including alcohol, drugs, over socialising etc.), that could have distorted her club and county journey, but looking back Fiona has no regrets in maintaining a football focus right through her Mayo footballing career.  She highlighted how our young girls from Limerick are in such a privileged position, with a professional structure in underage development. She believes in a work life balance and giving time to friends as well as academic and sporting activity. She also advocates the role of women in today’s modern game and calls on more women to get involved in coaching, even on men’s teams. Fiona recently won the Irish Times/Sports Ireland Sportswoman Award for December and is current secretary of the Women’s GPA.

Kerry All-Star and O’Connor Cup winner Lorraine Scanlon (of Castleisland Desmonds), has served her county with distinction for many years having won 4 Munster senior championship medals. Lorraine spoke of her early days playing football and practicing soloing and other skills in the kitchen. She comes from a wealth of football in Kerry however Lorraine continues to search for another All Ireland title today as she tries to emulate her mother Mary Scanlon’s achievements having won five All-Ireland medals as a member of the all-conquering Kerry ladies senior football team of the 1980s. Again, Lorraine highlighted to the girls the importance of work ethic, maintaining focus and commitment with a strong mental strength in overcoming disappointments along the way but the rewards at the end are unmeasurable. Whatever about the success on the pitch, most importantly the girls would build an unbreakable team spirit and bond with lifelong friendships that could not be taken away from them.

The findings showed a worrying trend of 1 in 2 young women give up team sports completely by the age of 13 and girls are three times more likely than boys to drop out of team sports at an early age. Despite this, most of the research findings were very positive for girls who continue to play sports with most girls saying that they have gained lifelong friendships from participating in team sports and playing team sports has a positive effect on girls’ self-confidence and mental well-being.

Speaking at the event, Pat said there is a lot to be positive about: “The increase in popularity of Ladies Gaelic football in Limerick is reflective of our national growth in participation in the sport and a steady increase in audience attendance over the last number of years. For example, supporter attendances to the senior All-Ireland Final last September in Croke Park (between Dublin and Mayo) broke all Irish and European attendance records to any women’s major sporting final in 2017. Coupled with TV viewing figures averaging over 300,000 and peaking to over 500,000 viewers at one point to TG4 on All Ireland Final Sunday, proves that the sport is now one of the fastest growing team sports in Ireland and Europe.

The Limerick Ladies Football underage development programme has been on a long but hugely positive development journey (from last October to where we are today in January). With over 250 girls (from 16 out of 23 clubs across the city and county from under 13,14 and under 16 age groups) participating on a seven-week development programme, followed up with the same numbers again trialing for their beloved proud sporting county, the staggering growth and hunger for Ladies Gaelic Football in Limerick is very evident. Pat is now on the lookout for a commercial partner that will back the underage County squads and elevate Limerick Ladies Football to new heights.