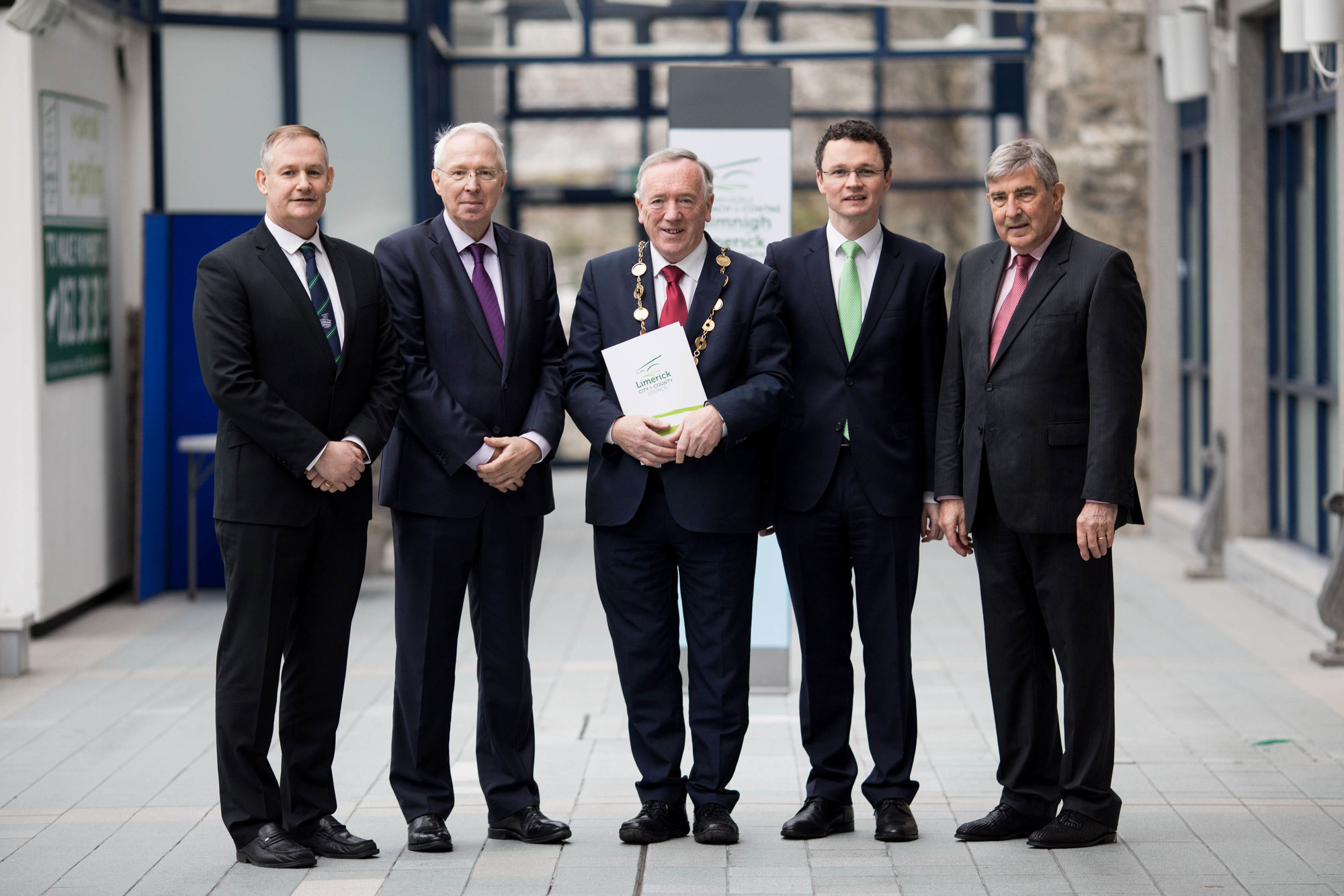 Conn Murray, Chief Executive, Limerick City and County Council, CEB Governor Rolf Wenzel, Councillor Stephen Keary, Mayor of the City and County of Limerick, Patrick Donovan TD is Minister of State at the Department of Finance and the Department of Public Expenditure and Reform and Denis Brosnan, Chairman Limerick 2030 at the Opera Site in Limerick after announcement of the Limerick Opera Site funding. Picture Sean Curtin/True Media.

The development of the 1.62-hectare landmark Opera Site in Limerick will deliver an unprecedented social dividend for the city, the formal signing of contracts for the Limerick Opera Site funding of €85 million Council of Europe Development Bank (CEB) finance for the project was told on Wednesday January 17.

Representatives of the Council of Europe Development Bank (CEB) and Limerick City and County Council put the formal seal on the financing arrangement, which effectively paves the way for the commencement of the €200 million project that will deliver state-of-the-art commercial/ office, retail and cultural space in the heart of the city.

A transformational project for Limerick, the fully developed site will be capable of employing up to 3,000 people across a 555,000 sq ft employment campus.

The €85 million Limerick Opera Site funding is matched by an existing commitment by the European Investment Bank (EIB) announced eight weeks ago, bringing to €170 million the total funding secured for the project.  This paves the way for the development, with a planning application to An Bord Pleanála to follow a public consultation in the spring.

The project will be developed by Limerick Twenty Thirty – a special purpose vehicle tasked with planning and developing key strategic sites in Limerick city and county – over a six-year period to LEED Gold (international, sustainable building standard sought by leading international companies) standards.  An employment hub, it will transform into a bustling night-time destination complete with restaurants, bars and open entertainment spaces.  The design will also be entirely complementary to, and protect, important Georgian architecture on the site. 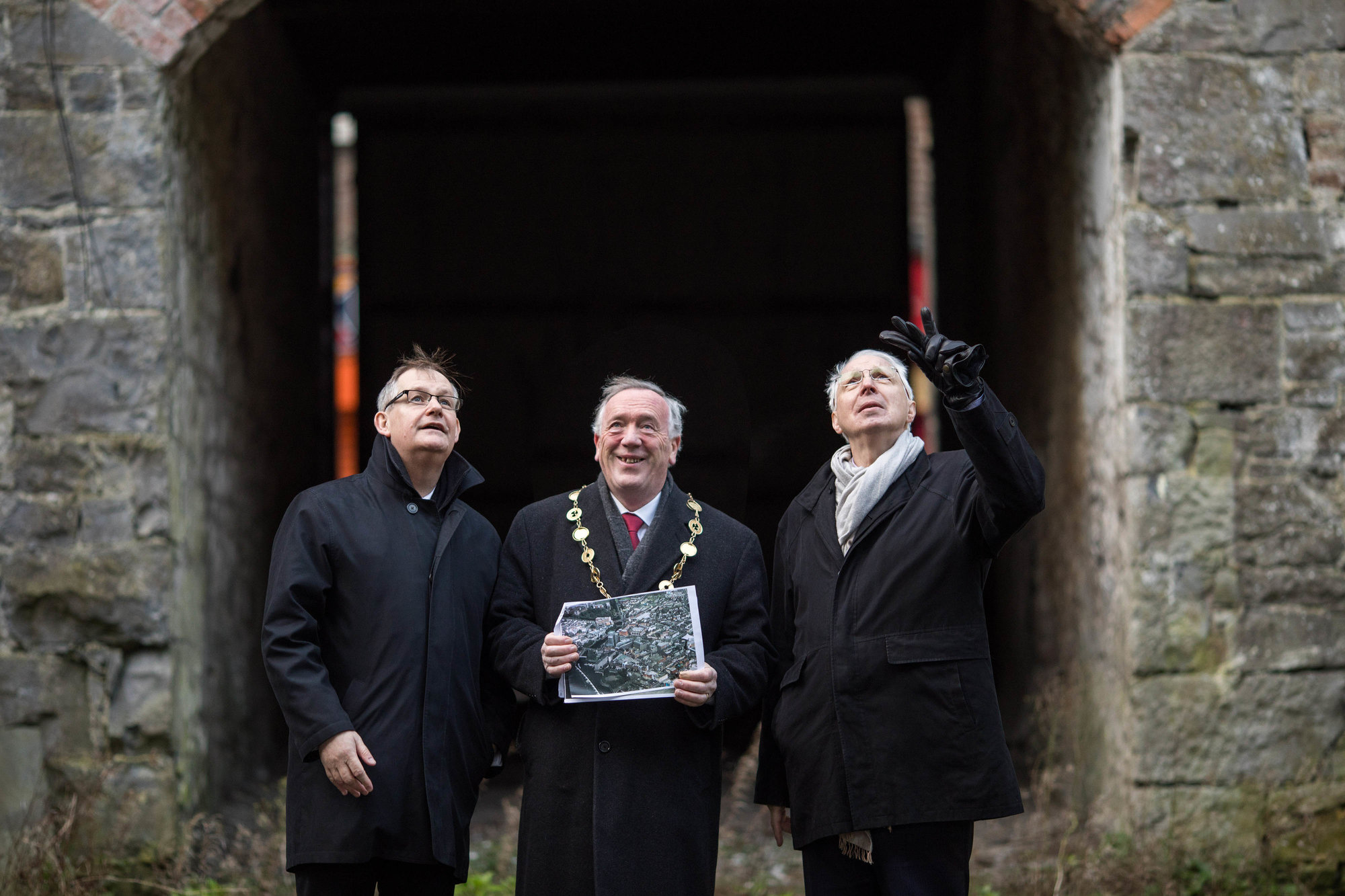 The Opera Site will be the largest single project in the Limerick Twenty Thirty programme, which was launched in autumn 2016.  Already progressing at pace with the development of the 80,000 sq. ft LEED Gold ‘Gardens International’’ office accommodation project on Henry Street that is set for completion in the summer, the overall programme will deliver €500m worth of transformational infrastructure across key strategic sites.

Governor of the Council of Europe Bank Dr Rolf Wenzel said: “As a development bank with an exclusively social mandate, we are eager to partner on projects that will deliver transformational benefits for cities.  The Opera Site project ticked every box for us in that regard.  Given the numbers that will work there, it will be a catalyst for economic growth across Limerick, lifting all areas of the city, particularly those with higher levels of unemployment.  It is the opportunity of a lifetime for this proud city and we are delighted to play our part in making that happen.”

Said Mayor of the City and County of Limerick Cllr Stephen Keary: “Today ensures we now have the funding in place that will kick-start a whole new era of economic development in Limerick.   This is the single most important development for Limerick as it will raise the entire economic and social standing of the city, with significant knock-on benefits for the region also.  It will revitalise city centre trade, stimulate our property market and attract further investment to Limerick.  It’s a very proud time for our city and we must all now give full backing to this project so that we seize on this unprecedented opportunity to transform our city.”

Said Limerick City and County Council Chief Executive Conn Murray: “From the moment we sat down with the CEB, we knew we were in a good place.  Not alone has it become a key source of funding for a project that is going to play a pivotal role in regenerating our city, it is an institution that has the same social priorities as we have.  The Opera Site is going to deliver an unprecedented social dividend for Limerick, which in ten years or so will stand out as a European model for how to rebuild urban economies.”

Chairman of Limerick Twenty Thirty Denis Brosnan said: “This is another day that illustrates the sense of ambition that typifies the Limerick of today.  Having had some 12,000 new jobs announced over the past five years, Limerick is now moving onto another level with the Opera Site.  It’s no accident as it’s simply a case of a city following a clear and coherent plan, in this instance the local authority’s ‘Limerick 2030: an Economic and Spatial Plan for Limerick’.  The redevelopment of the Opera Site was a key element of that plan, like many other elements that have already fallen into place.  The Limerick public can look forward to a very bright future.”

For more stories on the Limerick Opera Site click here

For more on the Council of Europe Development Bank click here