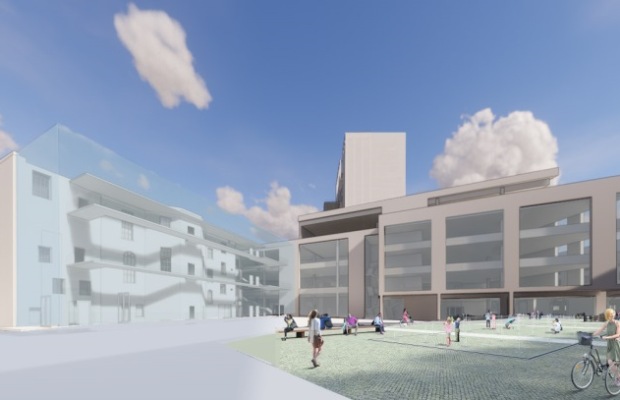 Limerick City and County Council has unveiled plans for the Limerick Opera Site project development, promising that it will transform the social and economic profile of the city centre and stimulate growth that will benefit not just its immediate environs but the entire region.

Councillors were given the first view of the latest stage of plans for the development of the four-acre site at a workshop delivered Tuesday, June 19th, 2018 by the Limerick Twenty Thirty DAC, which will develop the site on behalf of Limerick City and County Council.

The Limerick Opera Site is the single biggest urban development project ever undertaken in Limerick and will bring up to 3,000 people to work and live in the city centre site.

The workshop followed the publication of the design brief in February and a public consultation process that generated a positive response from a wide range of stakeholders, reflecting the enthusiasm for the project and its enormous potential as the single largest transformational project ever undertaken in Limerick city centre.

There will now follow another, public consultation period, which will lead to a detailed design, Environmental Impact Assessment Report (EIAR) and a Natura Impact Statement (NIS) before a planning application will be lodged in the autumn to An Bord Pleanála.

Some €170m in loan funding from the European Investment Bank and the Council of Europe Development Bank has already been secured for the project, work on which is set to commence in 2019.

As per the plans outlined today, the Opera Site development is set to involve 46,000 sqm of development office/ innovation/ education, residential, aparthotel, library, retail and café/restaurant/bar spaces.  These will be spread across six separate parcels of land in the 1.62-hectare site.

The project includes a “new living room” for Limerick – what will be Ireland’s most cutting-edge library, a world-class facility that will embrace traditional library functionality but also the digital era, with digital story-telling walls and multi-sensory experiences that strengthen the user-friendliness of the facility. The library will be across a mix of a three-storey new build merging into a three/four-storey existing structure on Rutland Street that will face out onto the junction with Francis Street, creating a stunning new aesthetic for the city centre from the former Town Hall.

Also included in the overall development will be a signature 14-storey new-build office block at Bank Place, facing out onto the Abbey River and will accommodate the Revenue Commissioners as an anchor tenant.

In keeping with the design ethos, the plans will protect all architecturally sensitive buildings on the existing site.  The Granary on Michael Street will be preserved but transformed internally, predominantly for office but also food/beverage use.

Michael Street will also get a six-storey new build that will accommodate office/ innovation/ education, retail and food/ beverage space.

Another parcel, on the corner of Patrick Street and Ellen Street, will see residential, an Apart Hotel, retail and food & beverage space developed across a five-storey new build and an existing four storey structure.  There will also be further opportunities for exemplarily residential in the Georgian building on Rutland Street, with the ground floor of the building reserved for retail.

In all, some 60% of the site will provide for accommodate Office/ Innovation/ Education space, with 15% set aside for residential, comprising upwards of 100 units between residential and an Aparthotel (short-term lettings).  Some 10% will be developed for retail and restaurants/ café/ bars.

A very significant emphasis is placed on the aesthetics of the site, with a very strong concentration on the public realm space throughout the site.  The 46,000 sqm development on the site will also include a multi-purpose and dynamic central plaza at its core, complete with a canopy-covered area, ideal for outdoor entertainment and other social activity. The plaza will also have a water feature that can be drained to facilitate exhibitions and other activities.  There will also be significant landscaping of the wider site, giving a strong metropolitan, riverside feel to the development.

Mayor of the City and County of Limerick Cllr Stephen Keary said: “Today is a very significant step in bringing the Opera Site to fruition. The importance of this project to Limerick cannot be understated. It will be the single biggest project ever undertaken in the city and one of the largest urban commercial projects ever embarked on outside of Dublin.”

“A clear vision is beginning to emerge as to what we will see developed at the Opera Site and it was very positively received today by the elected members.  The Opera Site is going to be a project of not just local but national importance.  It will transform the economy of Limerick City centre, bring thousands of people to work and live in this area and, after a period of unprecedented economic growth for Limerick and the wider region will ensure that we go on now to another level.”

David Conway CEO of Limerick Twenty Thirty DAC said “I would like to thank the councillors for such a very positive response to the scheme, today was an important step for us so that we now can move the development forward, get feedback from the people of Limerick, so we finalise the development to make a formal application to An Bord Pleanála in the Autumn.”