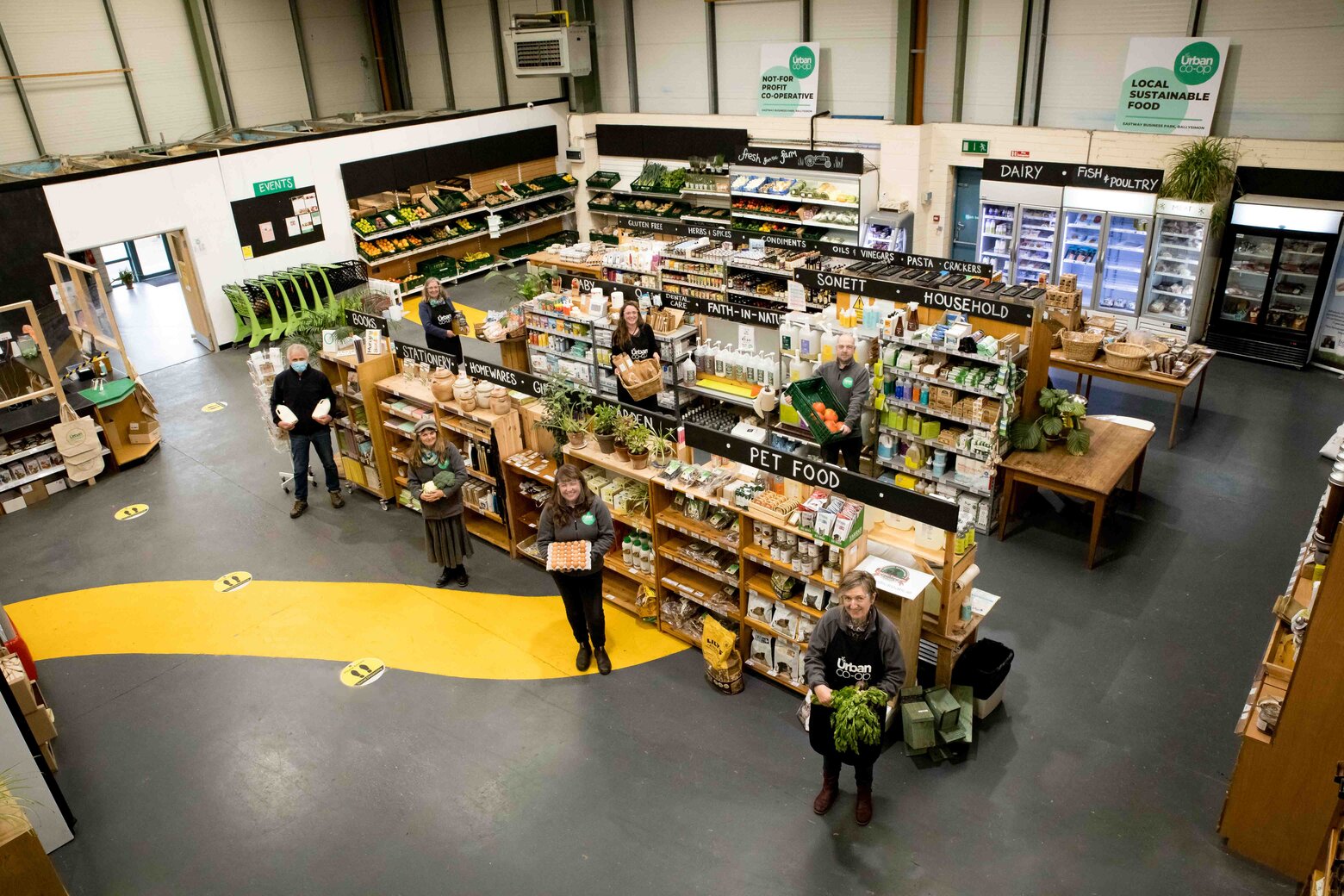 The Urban Co-op is a long-term supporter of local producers and has seen a massive increase in footfall and demand as a result of COVID-19 from consumers keen to boost their own personal health.

Since the onset of the COVID-19 pandemic, Irish consumers have become increasingly conscious of their health and the need to adequately nourish themselves to stave off illness and cope with the stresses and strains that we’re all now dealing with in our day-to-day lives.

This has led to an increase in demand for fresh locally grown seasonal foods, which are likely to become even more sought after, following the launch of the Government’s new ‘Keep Well’ campaign (launched on Thursday 29 October). One of the five main themes of the campaign is ‘Eating Well’ – by nourishing our bodies and minds, we can develop a better connection between the food we eat and how we feel and positively impact our physical and mental wellbeing.

Even before the launch of the ‘Keep Well’ campaign, throughout the pandemic record numbers of consumers have been choosing to shop in Limerick’s member-owned The Urban Co-op, located in the Eastway Business Park on the Ballysimon Road. This in turn is helping to support local growers and food producers – the backbone of the Irish food industry – in their hour of need. With the hospitality industry in Ireland having been catastrophically hit by the pandemic for over six months now and with cafes, hotels and restaurants under the constant threat of restrictions and further closures, the country’s growers and producers – recognised as being some of the best in the world – are fighting a battle to survive and to find buyers for the produce that they have put their blood, sweat and tears into producing.

The Urban Co-op is a long-term supporter of local producers and has seen a massive increase in footfall and demand as a result of COVID-19 from consumers keen to boost their own personal health and in doing so are helping to ensure the survival of independent local food businesses. It stocks a wide range of certified organic fruit, vegetables and whole foods, as well as a diverse selection of locally grown produce from suppliers in County Limerick and right across the country. Without the financial support and solace that The Urban Co-op and other Food Co-ops across Ireland have been able to offer to small scale food businesses in recent months, many would have found themselves under the very real threat of going out of business.

Due to the increase in demand as a result of COVID-19, the Urban Co-op now operates 7 days a week and has remained open to shoppers during the whole of the pandemic.

These potential losses would have a detrimental impact on Ireland’s proud food culture and the nation’s ability to nourish its people with Irish grown and produced ingredients at a time when there is an even bigger requirement for this with Brexit, and all of the negatives impacts that this is likely to have on the economy and Irish food industry, looming.

The Urban Co-op, where membership is open to all, was set up in July 2013. Due to the increase in demand as a result of COVID-19, it now operates 7 days a week from its 6,000 sq ft premises and has remained open to shoppers during the whole of the pandemic. Initially beginning life as a ‘buying club’ selling fruit, vegetables, bread and eggs, it has since grown into a full-service retail grocery store and community wellness hub with over 2,500 members, many of whom have come on board during the pandemic. Their numbers show an average weekly footfall increase of 40%, with sales up +42% when compared to the same period last year, and the average transaction spend up by +13% on 2019 figures.

Stocking hundreds of independent Irish food products from every corner of the country, The Urban Co-op Limerick offers dozens of small food businesses invaluable retail space to market and sell their products to discerning customers, who now more than ever before, understand the positive impact and benefits that eating and cooking locally grown/reared foods can have on their health and wellbeing. The lifeline that this then provides to local artisan producers, farmers and foragers has been the saviour of many during the last six months or so.

One of the many suppliers who have managed to protect the future of their business by selling their produce at the Urban Co-op is Crecora-based dairy farmer, Sean Condon. When speaking about the support that he has received from The Urban Co-op, Sean commented: “The Urban Co-op has made a huge difference to my business, selling organic raw milk. I enjoy the strong relationships with the customers and trust the Co-op to promote my business. There has most definitely been an increase in demand for my milk in recent months, with sales up 15%. It’s a pleasure to have this place so close to my farm. Now more than ever we need to help each other through this.”

Reacting to the increase in demand, Anne Maher, Managing Director at The Urban Co-op said: “Managing the extra demand, though a challenge, has highlighted the value of The Urban Co-op for the rising numbers who are choosing to support the local grocery co-operative model. The team here have worked continuously to support our members particularly those affected in the foodservice industry and the ability to provide an outlet for them has driven us forward to a 7-day offering. We are encouraged to see the rise in interest in locally sourced produce and also the understandable health focus of the customers. Our community wellbeing ultimately drives us to keep going.”

On the importance of good quality nourishment to help stave off illness, Éva Hill, a Limerick-based Nutritional Therapist and member of The Urban Co-op said: “One of my favourite places to shop is The Urban Co-Op and I recommend it to my clients also. It unites what I believe are the most important for good health; a wide range of the best quality organic foods, cosmetics and household cleaning agents, sourced locally wherever possible. Good nutrition and a toxin-free home is the base stone of health, and it is more important in this current climate than ever. A locally produced fresh diet supplies your immune system with all the nutrients it needs for proper functioning and makes you more resilient.”

For more stories on The Urban Co-op, click HERE

A video we shot about the early days of the Limerick Urban Co Op in 2014: