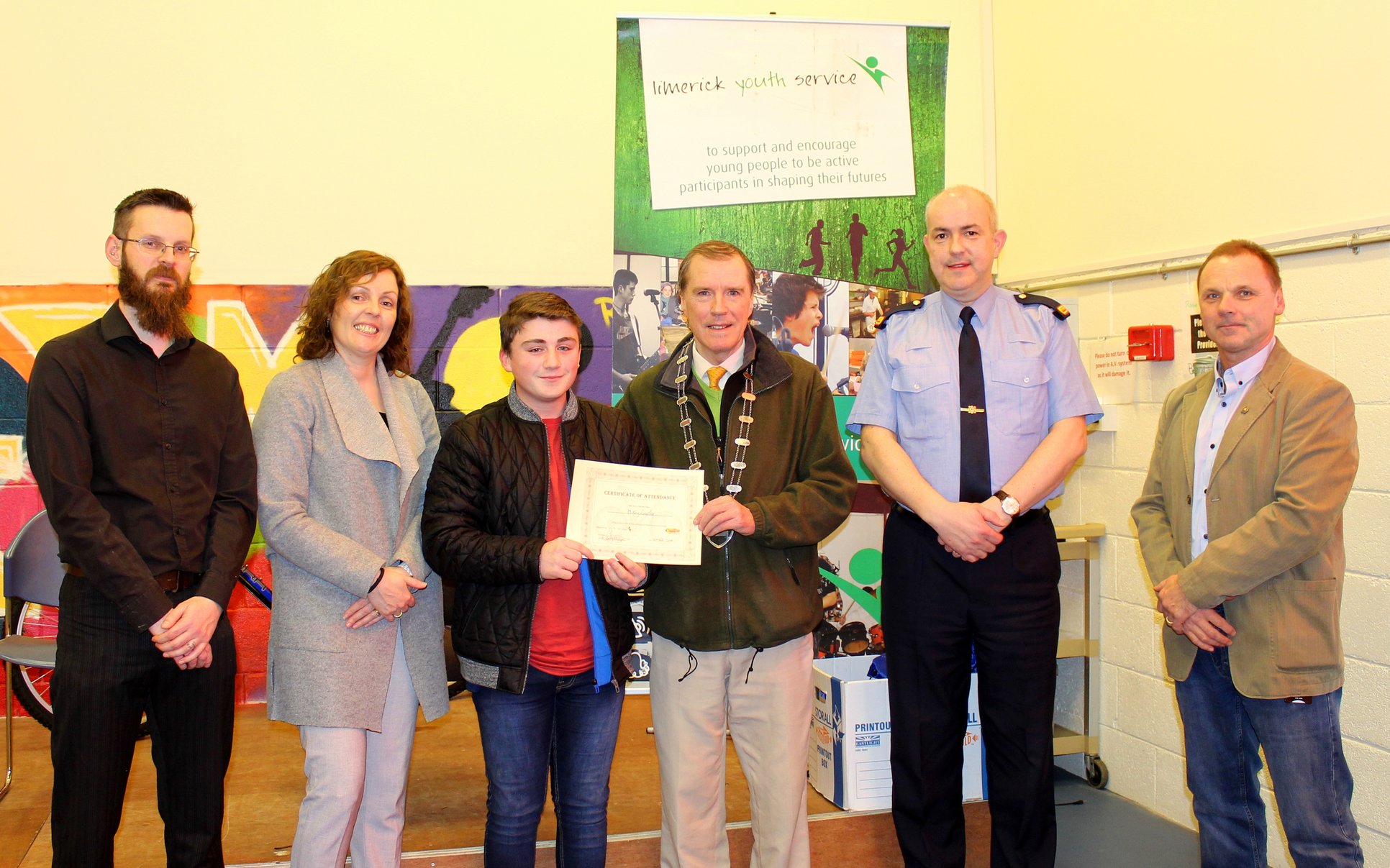 There were joyous scenes at the Southside Youth Space recently as eight young people who took part in the innovative Limerick Youth Service Bike Project, received their Certificates of Achievement from Cllr. Gerald Mitchell.

The teenagers, who hail from all across Limerick, were participants with ‘On Yer Bike’ – an exciting and very popular programme run by LYS’ Bike Project at The Factory Southside Youth Space, Galvone, Limerick.

Cllr. Mitchell, Cathaoirleach of the Municipal District of Cappamore-Kilmallock was joined at the awards presentation by Inspector Dermot O’Connor, An Garda Síochána, LYS CEO, Fiona O’Grady and the families and friends of the young people.

Speaking to the young people, Inspector O’Connor said, “you showed great motivation, commitment, and dedication in giving up your free time to take part in this programme.”

He continued, “You have learned to build bikes, met new people and cycled through some of Ireland’s most challenging and scenic cycling routes and that is something you should be extremely proud of.”

Inspector O’Connor was full of praise for the programme saying it was a “great course that taught young people about the technical skills as well as the fitness benefits associated with cycling.”

Meanwhile, course coordinator Des Galligan congratulated the graduates of the Limerick Youth Service Bike Project and thanked their families and those that supported the programme.

“You have been a joy to work with and to learn to assemble a bike from scratch in such a short space of time is a remarkable achievement,” said a very proud Des, adding with a smile “you gave up your Saturday morning lie-ins to explore the Emerald Isle!”

As one class ends, another is beginning and LYS have a number of vacancies for young people interested in taking part in the ‘On Yer Bike’ project.

‘On Yer Bike’ covers many parts of the bike industry such as maintenance and assembly as well as the employment opportunities in what is becoming one of Ireland’s fastest growing industries.

The social, physical and mental health benefits of cycling are also a key feature of the course with the teenagers learning about diet and nutrition in addition to modules that cover mindfulness and martial arts.

Away from the workshops, the teenagers will explore some of Ireland’s most majestic cycling greenways including the Ballyhoura Bike Trail, Co. Limerick and the Great Western Greenway, Co. Mayo.

To find out more about Limerick Youth Service click here.

Related Topics:limerick youth service
Up Next