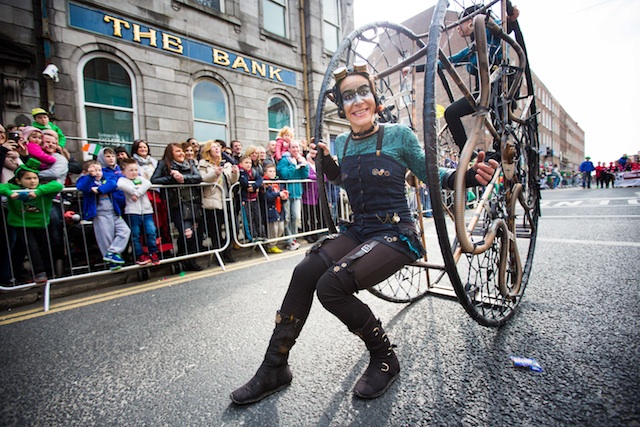 St Patricks Day Parade Theme 2017 has been announced as: ‘Our Stories, this is where we belong’

The aim of the St Patricks Day Parade Theme 2017 is that through story-telling, we celebrate where we belong and that Limerick will bring its own story to life on the streets of Limerick for our national holiday.

An estimated 80,000 people are expected to line the streets of Limerick City from midday on March 17th for one of Ireland’s largest regional St. Patrick’s Day Parades.  The parade, which is being co-ordinated by Grooveyard Productions on behalf of Limerick City and County Council, will feature thousands of participants from various community groups, companies, bands and sports clubs from across Limerick and further afield.

Aidan Phelan, creative director of the 2017 Limerick St Patrick’s Day Parade said: “We all grew up with stories.  We hear them from our parents, tell them to our children and pass them around the table.  They come from down the road and from far away. They tell us where we come from where we are going.  They give us our sense of shared identity.”

“Stories tell us about who we are and where we belong.  We find them in our communities, through our cultures and in our history.  Through this we create our home wherever we are.”

“We are looking for groups to think of imaginative and fun ways of telling their story on the streets of Limerick during the parade.”

Mayor of the City and County of Limerick Cllr Kieran O’Hanlon said: “The St Patrick’s Day Parade is always one of the highlights of the year.  It shows the pride that we have in being from Limerick and being Irish.  There is no greater sight than looking up O’Connell Street and see the waves and waves of colour marching down our premier street.”

Sheila Deegan, Limerick City and County Arts Officer said: “Everyone has a story to tell.  Fire up your imagination and regale us with your tales.  Celebrate your culture, your history and your sense of place.”

“St. Patrick’s Day is a civic event created by the communities of Limerick.  It’s a celebration of who we are as a people and a spectacular display of communities coming together in song and dance, in vivid colour and multifaceted inspiration.”

“We are a nation of storytellers and now is the time for Limerick to tell its story!  This is who we are and this is where we belong!”

If you would like to participate in this year’s parade, this first step is to complete the form which can be downloaded from Limerick.ie/stpatricksfestival.

Full details of the 2017 St Patrick’s Festival will be announced in the coming weeks.