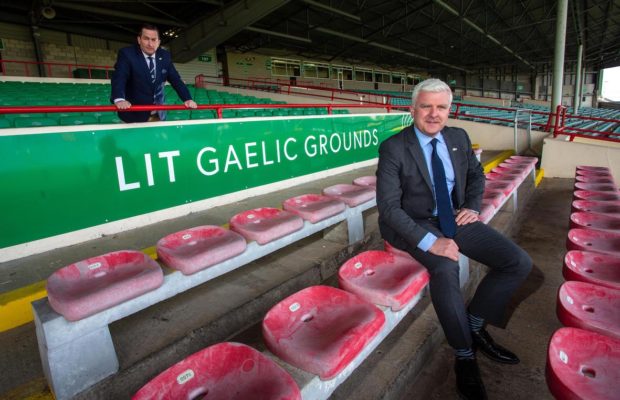 Speaking as the finishing touches were being put in place at the newly named LIT Gaelic Grounds today ahead of Sunday’s mouth-watering clash, Mr Foley said that partnering with LIT has been a perfect fit in so many respects.

“There’s so much interest in Sunday’s game, not least here in Limerick as we begin the defence of an All-Ireland that we waited so long to win, but Sunday is also the official beginning of a unique partnership with LIT that includes renaming the stadium to the LIT Gaelic Grounds.  This is such a special venue, with so many great memories for not just Limerick people but from across Munster and, indeed, beyond that there’s a great fondness for it.

But there are very few entities, if any, like LIT with whom we could have entered into a unanimously approved partnership that includes the renaming of this great venue as LIT. We already have a close working relationship with the college and it is, in its own right, one of the leading nurseries for hurling in Limerick. Our players who attended LIT, to a man, talk of how they love their time there and how it has improved their hurling.

While there they’ve also got to play with hurlers from other counties, including Cork.  That is one of the great things about the GAA, in general, and, indeed, LIT.  They create community and that’s what Limerick GAA is – one great community.”

Shane Malone, Communications and Marketing Manager at LIT, said “We formalised this agreement last month but have been working closer and closer over recent years.  Our relationship is about a shared ethos and a shared sense of community.  Sunday will see it come to life from a public perspective when we see the LIT Gaelic Grounds name unfold.  People will be reading and hearing about LIT Gaelic Grounds.  We’re particularly proud that we have a partnership that is completely unique in a national context.

We have shared beliefs and principles and have just agreed to work closer together in the best interest of our students and the communities in which LIT and the GAA are rooted.”

In addition to the renaming to the LIT Gaelic Grounds, the 10-year partnership will include:

For more information on the LIT Gaelic Grounds, click here

For more stories on sport in Limerick, click here