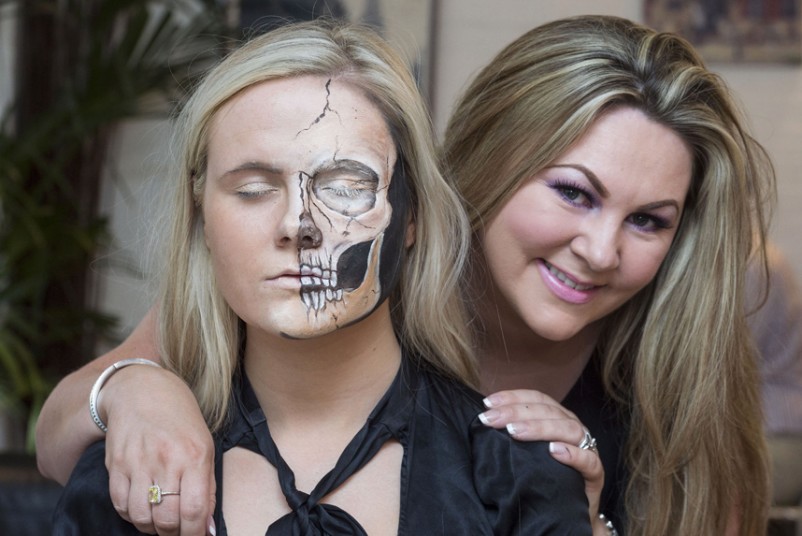 Maria’s fantastic transformation into The Joker from Batman: The Dark Knight.

Maria Malone-Guerbaa, a London mother-of-two, has the ability to transform herself into a number of famous faces through her unique make up style. Maria uses only make up and face paints to create the illusions. What makes her face painting technique so unusual is that, unlike other special effects used by make up artists, she does not rely on any prosthetic materials to create her ‘faces’.

The make up artist, who is originally from Limerick, has always had a talent and passion for art. Inspired by her mother, who is also an artist, Maria particularly enjoyed pencil drawing and charcoal sketches as a child and was continuously acknowledged for her artistic ability. After finishing school, she applied to Limerick Art College, however Maria ended up turning down her place in favour of a move to London.

Shortly after arriving in London, Maria met her husband and they opened a café together. Her life became extremely fast-paced and she soon had little time to pursue her original idea of focusing on her art career. Life was busy but the longing for art Maria possessed always remained. Between the ages of 18 and 33, Maria failed to even put a pencil in her hand. Realising just how much she missed art, she decided to enroll herself in Christine Blundell’s make-up school in Camden. Here she took on a 3 month intensive course from which she received extremely high recognition for her artistic skills and was then recommended to work on various projects. Some of these projects included City of Angels at the Barbican Theatre, Horrible Histories for Channel 4, Evita, Rock of Ages and various films and adverts. At the same time, Maria worked as a freelance wedding make-up artist while working for Halloween fancy dress parties and some school events. From the school events she received many private bookings and from there, people’s interest just began to develop.

Ever since seeing Michael Jackson’s ‘Thriller’, Maria had been fascinated by FX illusion make-up using face paints. She began to practice these skills more and more, on herself as well as on her children! Recognising this unique artistic flare, Maria set up both Facebook and Instagram accounts on which she could showcase her work. Through these accounts, Maria was opened up to a whole world of body and face painters who, just like her, had become infatuated with this particular genre of art. Her Morgan Freeman and Elvis Presley pieces went viral and Maria quickly began to receive messages and enquiries from all over the world from people who were blown away by her work.

Another of Maria’s ‘faces’ representing the legend Freddie Mercury of Queen.

Since becoming an internet sensation through her self-transformation make-up, Maria and her make-up artistry has not gone unnoticed in the world of media. Her ‘faces’ have appeared on UTV, in the Sun Newspaper, the Telegraph Newspaper, Her.ie and what she describes as being “a surreal experience”, on Sky News Sunrise with Eamonn Holmes. Some of her ‘faces’ have included celebrities, footballers, zombies and 3D effects, a lot of which are almost terrifying! Famous faces include Angelina Jolie, Freddy Mercury, Mike Tyson, President Obama, Jack Nicholson, the Queen and soccer player Wayne Rooney.

Maria tells me, “My dream is to to bring my art back to Irish shores. I would love to return and fulfill the numerous requests I have received about setting up workshops and classes that will bring out people’s inner artistic skill. I hope to inspire people to follow their heart and never give up. I hope to inspire artists and I look forward to what life brings.” You can find out more about Maria Malone-Guerbaa’s work on Facebook, Instagram and Twitter @mersartmakeup.

Maria’s interpretations of famous Football stars in preparation for the World Cup.